While hockey purists will obviously be turned off by the rough-and-tumble nature of NHL Hitz, it's a great game of hockey that anyone can pick up and play.

Midway has been making arcade-style sports games for quite some time. The company usually sticks to a pretty basic formula that consists of taking some of the players off of the playing field, removing almost all of the rules, and adding the ability to turbo-boost into your opponents, wildly knocking them over. Last year marked the company's reentry into the hockey market with a new series, NHL Hitz. Hitz stuck to this formula quite well, and the core game was great. However, it was a little too simple for its own good, making it hard for players to really get into it for extended periods of time. NHL Hitz 2003 takes that core gameplay and adds some much-needed depth to fill it out, as well as additional modes of play. The result is a fun, fast-paced game of no-rules hockey that should appeal to fans of Midway's other action sports games as well as fans of the unbeatable pick-up-and-play style of Electronic Arts' 16-bit hockey offerings.

The main mode for multiple players is a simple exhibition mode. Here, up to four players can go at it on the ice in a no-strings-attached game. Season mode puts you into the standard NHL schedule, though you can opt for a shorter season if you so desire. Hitz also has a small collection of hockey-related minigames, such as keep-away. The minigames are fun for multiple players and serve as a fairly interesting diversion. Franchise mode is a deep team-building mode. You pick and name your team, name your players, and play against other teams to earn experience points. Those points can be used to upgrade your players in various categories, such as toughness, speed, passing, and agility. After beating all the lesser teams in a tier, you can move on to battle a "boss team" of sorts for that region. Beating that team nets you some new equipment for your players, which also enhances their stats. The franchise mode is a nice addition that adds a good deal of replay value to the single-player game. However, veterans of the game should be sure to start their franchise on the higher difficulty settings, as the game tends to be a bit easy on its default setting. One-timers hit the net a little too often otherwise, and computer-controlled players are very easy to knock down.

The game is stripped down from real hockey, but there's definitely still some strategy to be found. While you have the obvious shoot, pass, and check buttons, you can also deke, squat to block shots and passes, poke check, and execute a puck-guarding maneuver. Like in other Midway games, you can become "on fire," which improves your stats for a time. However, unlike in other games in Midway's sports line, being on fire in Hitz doesn't make you completely unstoppable, and you trigger exactly when you light up by pressing an activation button. Dekes let you spin around defenders, and they also do a nice job of confusing the goalie, though not as much as a well-placed one-timer will. One-timers fool the computer goalies quite often on the default difficulty setting, making scores of 10-1 or better fairly easy to get against computer teams. So as with most sports games, Hitz is best played with multiple players, and the two-to-four-player game is definitely exciting and fun.

NHL Hitz 2003 looks pretty nice. The players animate well and look solid, though close-ups reveal some occasionally bad player face textures. The game runs fast and smooth, and the crowd around the rink is done in 3D and actually looks surprisingly good. You'll see the crowd occasionally do the wave--it doesn't just repeat the same animation--and the brief shots of spectators between periods look pretty good. The ice and arenas look great, but the real standouts are the hits themselves. Though you see the action from a fairly high vantage point, the checks in this game look absolutely bone crushing. Between the high speed of the action and the check animations, the nastier checks--such as one that knocks the victim through the glass and into the crowd--will make you flinch. The game sound is also very well done, though the commentary doesn't quite live up to the high quality of the arena effects and the sounds of hockey, such as slap shots and checks. While the commentary that is in place is well spoken and occasionally funny, there simply isn't enough of it, and as a result, you'll hear the same speech segments game after game.

While hockey purists will obviously be turned off by the rough-and-tumble nature of NHL Hitz, it's a great game of hockey that anyone can pick up and play. It's simple enough to even appeal to people who aren't really interested in the actual sport. Great multiplayer gaming and added single-player depth make Hitz 2003 a pretty easy game to recommend. 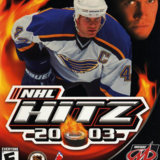 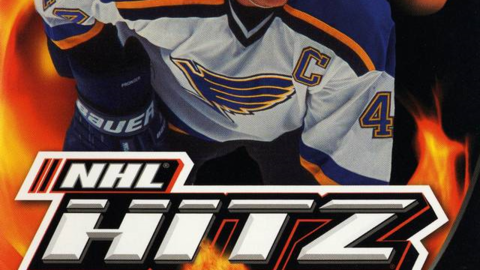 While hockey purists will obviously be turned off by the rough-and-tumble nature of NHL Hitz, it's a great game of hockey that anyone can pick up and play.