Anyone who's played Midway's Wayne Gretzky games will be right at home playing NHL Hitz 2002 but will find it to be little more than a nostalgic walk down memory lane.

Hockey fans planning to purchase an Xbox have a lot to look forward to. EA Sports' definitive pucks simulation, NHL 2002, will be released shortly after the console's launch, and the first installment in Midway's new arcade hockey franchise, NHL Hitz 2002, will be available at the console's introduction to the market. The perfect antithesis of feature-heavy simulations, NHL Hitz 2002 is a mile-a-minute type of game that eschews the muck-and-grind play of the real NHL in favor of over-the-top checks and exaggerated speed. Newcomers to video games will find NHL Hitz 2002 to be a refreshing change of pace, but anyone who's spent adequate time with Midway's older hockey games will find little to reinvigorate interest.

Anyone who has played Midway's other arcade sports games such as NFL Blitz or NBA Jam should know what to expect from NHL Hitz 2002. If you're looking to set up your power play and generate some shots or like to play the defensive trap to limit the other team's chances, NHL Hitz is not the game for you. Games of NHL Hitz are three-on-three affairs where the checking totals outweigh the shots on goal. Players will catch on fire after scoring three goals in a row, and the entire team will catch fire if three straight goals are scored on one-timers. Just because a player is on fire doesn't necessarily translate into a string of goals, as it still requires a nice shot to find the back of the net. Player ratings are fairly accurate--smaller players like Martin Straka won't knock thugs like Scott Stevens off the puck, and sharpshooters like Mario Lemieux have the uncanny ability to score when the chips are down.

Traditional hockey strategy has been thrown out the window, and a simple rock-paper-scissors scheme is used to govern the game. For every offensive move, there's a defensive move to thwart it. If you're getting checked to the ice by the opposition, simply perform a spin move and you'll avoid checks. If your opponent starts trying to poke check the puck free, then it's time to use the puck protecting move. It's a simple system, to be sure. But in a game that plays this quickly, there's not a lot of time to make decisions, and this gameplay system is a perfect fit. The fighting in NHL Hitz is the best yet seen in a hockey game. The punch and block mechanics are sound, and you can even finish a player off with a combo or special moves like head butts and chokeholds. If your player loses a fight, he will be lost for the remainder of the game. This adds incentive to learn the fighting in the game and can turn the tide of the game rather quickly when a big scorer is relegated to the bench. For a game that's easy to pick up and play, there's a lot of hidden depth in NHL Hitz 2002.

Anyone who's ever played NFL Blitz or NBA Jam should be familiar with rubber-band AI. This allows the computer to adjust to your abilities on the fly and guarantees that each game is never over, now matter how big the lead. It helps keep the games close and exciting, but the result is that it never seems to matter how good you play. If you're up by a few goals, your goalie will suddenly become Swiss cheese and allow slap shots from center ice to find their way into the net. Yet, the opposing goalie will become a veritable brick wall, not allowing a single goal, no matter how good the shot. This same AI carries over into the multiplayer modes as well, and it can be frustrating to lose to someone in the final seconds on a shot that has no business stretching the twine.

Arcade sports games have traditionally been sparse where gameplay modes are concerned, but NHL Hitz has plenty. There's an exhibition mode for head-to-head play for up to four players, a season mode that requires you to defeat all 30 NHL teams, a franchise mode that asks you to take a created team to the Midway Cup finals, and a skills mode that helps you tune your abilities. Points are awarded after each victory, for answering trivia questions following each game, and for accomplishing specific objectives in the skills mode. The points can then be spent in the hockey shop to unlock player heads, alternate jerseys, and fantasy rinks. The create-a-player mode is surprisingly deep--you may customize a player right down to his nose size and head width. If you choose to create a team for the franchise mode, you must select from 11 different jerseys, pick a rink, and start chipping away at the ladder of NHL teams to beat. Both created players and teams are available for play in the exhibition mode, and it's nice to be able to improve created player stats while whooping on your friends. While the gameplay modes included in NHL Hitz are nowhere near as deep as those found in most simulation hockey games, there's enough variety to keep players busy for some time.

While it lacks the stark realism found in simulation hockey games like EA's NHL series, NHL Hitz features a crisp, clean look. The players and stadium models have remained virtually untouched when compared with those of the PlayStation 2 version of the game, but the textures are of a superior clarity and the frame rate is rock solid. There's a nice variety of player models included in the game, and you can even create your own players, but they're still difficult to identify based solely upon their appearance. Player animation is smooth, and small touches such as players hopping over downed opponents or getting checked through the glass show themselves after extended play. NHL Hitz is the first sports game to include a crowd constructed entirely of polygons. There are just a handful of rows, but each person is independently animated, and it really brings the arena to life. The crowd will walk out of the arena if the game's a blowout, stand up and cheer for exciting plays, and even hold up signs that display codes for the game. The ice surface is fully environment-mapped and will gradually get chewed up as the periods wear on. Electricity will rain down from the rafters when a player catches on fire, and flaming pucks and players emit real-time lighting that can be seen on the ice and boards. Several fantasy rinks, such as an alien base and a graveyard, can be purchased once enough points have been accumulated, and they're the graphical highlight of the game. There's something about watching hockey players skate on a marble surface while aliens sit and cheer that will strike a chord in most players. NHL Hitz 2002's graphics aren't especially impressive, but they are simple enough to allow the game to play rather briskly and detailed enough that nothing becomes offensive during close-ups.

The same announcer behind the play-by-play in other sports games by Midway has returned for NHL Hitz 2002. His statements don't repeat nearly as often as they used to, but after a few days, you'll be glad there's an option to turn him off. Both cheers and boos can be triggered at will, and they add a nice touch for multiplayer games against friends. Several licensed artists have made it onto the soundtrack, including Limp Bizkit, Fuel, and Staind, but their respective songs are played only in between games. The sound effects for checks and shots are a bit exaggerated when compared with those found in NHL 2002, but that's exactly what you'd expect from a game of NHL Hitz's nature.

Anyone who's played Midway's Wayne Gretzky games will be right at home playing NHL Hitz 2002 but will find it to be little more than a nostalgic walk down memory lane. But those who have yet to discover arcade hockey games will be instantly hooked on its multiplayer mode. The enjoyment NHL Hitz 2002 deteriorates rather quickly due to its negligible computer AI and simplistic gameplay, but if you're looking for some quick-hit fun from your hockey games, it's an excellent choice. 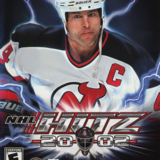 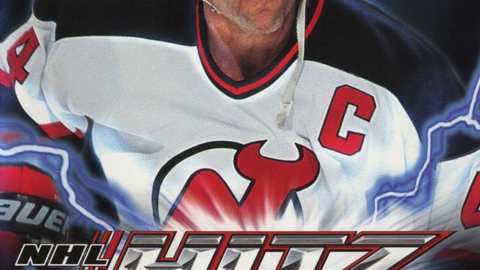 As the only hockey game available, NHL Hitz 2002 deserves a strong look from GameCube-owning pucks fans.