All in all, FaceOff is simply average.

Joining in on the deluge of hockey games this year, Sony released the latest game in its popular hockey series, NHL FaceOff 98. This year is full of competition, making it even tougher than last year to declare a clear-cut "best hockey game." FaceOff 98 can't lay claim to the best hockey game this year; instead it scores the ever-coveted "most confusing control" award.

FaceOff 98 contains all the basic features you've come to expect from a hockey game. All 26 NHL teams are represented, and all the players are there, too. A season mode lets you take a team from one end of the year to the other as well as watch how the rest of the league is doing. Players can be traded from one team to another and created as well. A few managerial options exist (release player, sign free agent, and so on), but it isn't nearly as complete as NHL Breakaway 98.

Playing FaceOff 98 is troublesome. So many buttons are used, and it seems like almost all of them perform two or more functions. The result (besides a very steep learning curve) is that you'll be fumbling with the buttons for quite some time. Also, the ice is as slippery as, well, ice. So keeping your players skating without overshooting their mark can be a chore. FaceOff, like every other sports title these days, also has an icon-passing feature, which is helpful, but the action on the ice is still a little confusing. The fact that every single camera angle is all but useless doesn't help.

The graphics in FaceOff are decent, but again, the rest of this year's hockey games do it just as well, if not better. The characters are large, partially because the camera views are zoomed in too far. The characters look good when they're shooting or checking, but the skating animations seem nonexistent, and the players just shuttle around the rink without ever having to move their feet. The sound effects are well done, but the option screen music is really quite annoying.

All in all, FaceOff is simply average. If you're really looking for a great hockey game this year, check out NHL Breakaway 98 or NHL 98. They do just about everything that FaceOff does...only better. 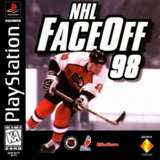