NHL Breakaway 99 could be considered a great hockey game if you haven't played NHL Breakaway 98. If you have, then calling it the same game would be a bit more appropriate, seeing as how all of the changes and additions to this year's Breakaway are merely superficial.

Of course the game has updated player rosters, team designs, rules, and schedules, and now includes the new Nashville Predators. Other than that, it's identical. But for those of you that missed the first Breakaway, I'll go over some of the game's finer points. Breakaway 99 has all of the real NHL teams, eight international teams, all of the players, and their stats. Players can be traded back and forth, letting you create a dream team of hockey's greatest players.

The best feature of the Breakaway series is its management mode. It awards points for every victory, which can be used to pay for new coaches, physical therapists (which speed the recovery of injured players), or to improve your stadium, which in turn will help raise your attendance and net you more points to spend per victory. This feature really makes playing an entire season fun.

The ease of control also helps in making Breakaway fun to play. It has intuitive controls for beginners that let you play with the use of three buttons: pass, shoot, and check. Then when you get the hang of it you can learn some of the more advanced features of the game. One such feature is to play a single position and rely on your team to handle the bulk of the action while you man your post.

Visually, the game is the same as last year's title. While the detail isn't quite up to speed with NHL 99, the animations of the players falling, skating, and shooting look fairly realistic. While the graphics looked great for their time last year, after seeing NHL 99 on the N64, they look a little weak. Acclaim should have really put the effort in and made the game run in hi-res mode like Turok 2 or Quarterback Club 99. The only real audio change in the game is the music at the beginning of the game, which is a bummer since lasts year's intro music was this cool upbeat techno track. It still has the same announcer, organ music, and various sound effects from the previous Breakaway.

NHL Breakaway was a good hockey game... last year. This year NHL 99 on the N64 is the way to go. The only thing Breakaway 99 has over it is all of the team management goodies. But when you compare the two side-by-side, NHL 99 blows it out of the water. 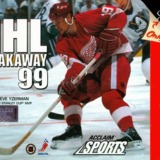