NHL 99 retains the outstanding gameplay of the original 16-bit games.

NHL 99 continues a series of great hockey games that EA originally programmed for the Genesis. The original NHL Hockey was such a good game, that it actually turned me into a hockey fan. How has the series held up over the years? Pretty well. There have been a few versions that have left out the casual sports gamer, taking a more complex route. NHL 99 retains the outstanding gameplay of the original 16-bit games, but gives you lots of options, allowing you make the game as simple or as complex as you want.

For starters, you can disable just about all the rules, including icing, two-line passes, offsides, and those pesky interference calls. Other options include player trading, which also includes the ability to make your own players. Gameplay modes include all the modes we've come to expect from modern-day sports titles. Exhibition games allow you to dive right in and play a meaningless game, while season mode and championship mode allow you to give your games a little more meaning. There is also a shootout mode, which allows you to practice your breakaways in a penalty shot competition.

The gameplay is extremely simple to learn, though there are advanced options that you can learn, also. At its most simplistic, NHL 99 requires the use of only three buttons. However, decide to control your own goalie, call some offensive or defensive plays, or change lines, and you'll find that the game can get really complex. Still, the control is really great. The analog controller really allows for precision skating. The AI in the game (based on last year's PlayStation version) is reasonably good and scales pretty well to fit the difficulty setting.

The graphics in NHL 99 work really well. The skating and checking animations are all pretty nice, and the game runs at a nice, smooth frame rate. The sound, unfortunately, doesn't come off as well. Sure, the actual sounds of hockey are pretty good, but the announcer really kills it. It seems like he only says about eight different things. Even though it was recorded by NHL analyst, Bill Clement, it still sounds like EA called in one of the night janitors at the eleventh hour to record things like "freight train...woo wooooo!"

NHL 99 provides a great gameplay experience for both fans and nonfans of the sport. It is simple enough for anyone to pick up and play, yet there's enough here to keep you interested for a long time. With this game on the market, you can finally pack up your Genesis for good. 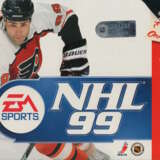