There are a lot of hockey games available right now on the PlayStation. In fact, hockey may just win the award for "most crowded video game sports category" this year. Last year, the competition was fierce, with games like Sony's NHL Faceoff and Virgin's NHL Powerplay vying for the puck. This year though, the choice is easier - most of the games out there are pretty average, and NHL 98 is among the best.

NHL 98 has the array of features that you would expect from an EA Sports title. All 26 NHL teams are here, along with 18 international teams and two division all-star rosters, and EA uses the real NHL players and stadiums as well. Each game starts off realistically, with the tail end of the National Anthem being sung (which varies depending on which country your team hails from), and the game contains an amazing amount of play-by-play commentary that keeps up better than any other hockey game out there. To say that NHL 98 is like watching a game on television would be selling it short though, because the amount of interactive features that the game has makes the televised version look boring.

For starters, NHL 98 features more camera angles than any previous version of the game, and they can be switched on the fly, which means you don't have to press pause every time you want to get a different view. Using the same interface, you can also change your offensive and defensive strategies during the game by pressing the top controller buttons. Features like these make the game move faster than any other hockey title out there, and they also give the game a thrilling edge that others lack. The play control has also been tweaked, and it is now easier than ever to pull off moves while maneuvering on the ice. And for fans of blood, yes, you can fight in this year's version.

The most noticeable improvement over last year's version though is the graphics. While the previous game featured jerky animation and strange-looking characters, this year's game has an array of realistic, lifelike, polygonal players that move in a smooth fashion. Sure, the players look a tad gimpy, but the 3D animation in NHL 98 is better than any other hockey game out there this year (if you need proof, just watch how the players sway their hips as they move along the ice). The soundtrack has also been redone, and I, for one, am a big fan of EA's rock-meets-techno accompaniment.

One word of warning though, the computer opponent in this version is hard! Even on rookie level you can expect a good amount of competition. Colorado Avalanche coach, Mark Crawford, worked with EA on developing the strategies in this game, and the same way that they can work for you, they can work against you. The old fake-out tricks that carried you through the 16-bit days will likely not work as well in NHL 98. The fierce competition that the AI provides makes each game more intense and therefore is somewhat welcome.

In the past, EA Sports ruled the hockey arena with its NHL series. When it made the jump from 16- to 32-bit gaming, EA lost its magic touch and was forced to go back to the drawing board. NHL 98 for the PlayStation is the best effort yet, and EA is definitely on the verge of another winning streak. If you love hockey games, this is the best title to pick up this season. 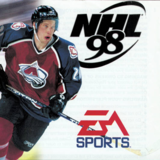