NHL 11 is the best hockey game to date.

A tagline like "Any moment can be a wow moment" just invites mockery. Splashing this catchphrase all over the back cover of NHL 11 for the Xbox 360 and PlayStation 3 is certainly over the top and more than a bit cheesy. But it's also totally accurate. EA Sports has done a magnificent job with this year's take on the sport, improving it in every area with smarter on-ice AI, sharper controls, and a range of options that take the simulation deeper into the real hockey world, such as being able to start player careers in major junior. The number of refinements enhance the game across the board and take you right down to ice level. You'll soon find yourself talking to the TV and congratulating virtual linemates after great plays. All that's missing is dressing-room camaraderie and being able to head out for a few beers after the game with your buddies on the team.

With all of those raves out of the way, here's a comment to bring things down to earth a little bit--NHL 11 is not a revolutionary advancement over NHL 10 and NHL 09. The three games are kissing cousins, with the new release looking and playing a lot like the last two iterations in the series. It's only when you go deeper into the game that you really take notice of the many improvements. First and foremost is markedly superior artificial intelligence. The game lives up to that "wow moment" promise on the packaging, with a ridiculously wide range of plays on the ice. It all flows very naturally and realistically, and you're constantly caught by surprise with new developments that mimic what takes place on the ice in real hockey games.

The only thing predictable is the sheer unpredictability of it all, as the physics engine lets just about anything happen that would be plausible in a real hockey game. Goals come from all over the ice. Point shots, tips from the slot, bouncing pucks behind the goal line, crazy deflections off a d-man's chest--you'll see it all. Offbeat stuff happens on a regular basis, too. Shots will carom off the goalie's mask, someone will lose an edge and go down awkwardly, shots will bounce off both posts and back out again, a defenseman will break a stick and get a helping hand from a forward coming back to lend him his (breaking sticks are a new addition this year), and so on. The result is a game that constantly reinvents itself. You could conceivably play a dozen games in a row and never see the same play twice.

Controls seem sharper, too. The right stick in particular affords more in-depth control of your stick when you're stickhandling, shooting, and hitting. Everything you do seems to produce an infinite variety of results on the ice, based on how you move the stick and the position that your player is in at the time. Sometimes you fire a laser beam or just crush an opponent with a spine-shaking check, and other times your timing or positioning are off and you let go a floater or slam yourself into the boards. New dekes allow for some crazy Ovechkin-like maneuvers, such as kicking the puck up to your stick and even hopping over opponents. Extra controls have been added for face-offs, too. You can now tie up opponents, shoot off the draw, or win draws to either your forehand or backhand. This comes in particularly handy when out on the power play or when killing penalties, because you can now tailor your face-off strategy accordingly and get the puck to the right d-man for the situation. Granted, this seems like a small addition to the game, but it really gets you involved in face-offs, which were always snoozers before.

Artificial intelligence has also been noticeably ramped up in NHL 11. Players seem to know what they're doing this year. Positional play is still absolutely vital to cover attacking forwards. As in the previous two games, you have to have some working knowledge of hockey to play the game effectively at the default difficulty level. Get out of place by trying to throw big hits or by cherry-picking, and the computer-controlled squad will make you pay. Teammates are also smart. They set up good breakouts now, so you spend a lot less time bottled up in your own end than you did in last year's game. Power plays and penalty kills are also effectively run. You can play locked to a position as though you were playing real hockey and not be frustrated, because the AI passes the puck astutely and uses you most of the time when you get open. That said, it's not perfect. Computer players still hold onto the puck a little too long. So at times players don't shoot when they clearly should, they ignore a linemate in the open, or they stickhandle longer than would be advisable, causing them to miss out on great scoring chances. Don't let this scare you off, though. The issue isn't too bad, and players pull off at least three brilliant moves for every time they wreck a scoring chance by dithering.

Most of the modes of play have been held over from last year. You can still play seasons, tournaments, and playoff runs for the Stanley Cup, or go online for some silky-smooth, lag-free action on the virtual ice with single quick games and whole online leagues. The biggest addition to the roster of game options this year is the Hockey Ultimate Team, where you assemble a club and compete against the CPU or against other players online in the EA Sports UHL. This is something of a convoluted blending of an arcade sports game and a collectible card game, similar to previous modes in Madden and FIFA. You earn EA pucks through success on the ice, and then use this in-game currency to buy packs filled with cards representing players from all over the world, along with consumable cards such as contract extensions, training skill buffs, coaches, arenas, and more. So you set your lineup and then apply training cards to players to buff their skills, contract cards to players to lengthen their time with your club, and so on. Cards can also be traded and put up for auction.

Hockey Ultimate Team could well become an obsession, because it's hard to resist the lure of buffing your club constantly through new pack buys. The game is also pretty challenging, since you not only need to build a great team, but also come up with cards to improve player skills and keep your team together and to mix lines up to enhance chemistry. Of course, if you run out of EA pucks earned in-game, you can pony up real cash and buy more. Good packs are pricey, and EA pucks are earned pretty slowly when you're just playing games, so the temptation will be there to break out the credit card and buy your way to a great team.

Another welcome new feature is the addition of the Canadian Hockey League, with all of the teams and rosters from the major juniors. This is arguably most noteworthy in Be a Pro, where you create a player and guide him to NHL stardom, because you can now start off at the junior club of your choice and improve your NHL draft position by playing the Memorial Cup tourney. It's a cool addition, since you can get a real thrill out of helping a fave team like the Peterborough Petes win the Mem Cup. But it has probably got limited appeal, being geared for those hardcore hockey fans who follow the OHL, WHL, or QMJHL. Of course, you can also play full seasons with the CHL teams, just as you could in previous years with clubs from pro leagues. Be a GM mode has been improved this year with tweaks to the AI and the addition of unrestricted and restricted free agents. These changes make for a better management sim, although the CPU still doesn't seem to understand the salary cap. Teams will frequently refuse deals that they flat-out have to make to get under the cap, and the game itself will step in and stop trades in the summer that would result in a club going over the cap, even though teams in the real NHL are allowed to exceed the cap by up to 10 percent in the offseason.

Presentation is just about the same as it was last year. The game looks fantastic on both the 360 and the PS3 (the visuals are slightly better on the 360, due to more jaggies on the PS3, but the difference is minor)--very close to an actual TV broadcast. Players look like their real-life counterparts, animations are dead-on right down to the way that players cruise around and twirl sticks after whistles, and the crowd is appropriately raucous. Clips while waiting for face-offs are a bit annoying, mainly for how they never seem to show the plays you want to see. You'll wait for an instant-replay look at that fantastic scoring chance you just had, only to see something that happened 10 minutes ago or a close-up of the goalie looking up at the clock.

Rink audio effects are outstanding, putting you right in the middle of a crowd thrilled at every little thing that happens on the ice. Commentary and color from Gary Thorne and Bill Clement are more up and down, though. They mix up accurate observations about things like goalies stupidly playing the puck in traffic with bizarre raves about odd-man breaks that aren't actually happening. The soundtrack is an equal blend of satisfying and annoying. Fresh tunes from modern bands like Airbourne and Megadeth share space with arena songs that have been assaulting your ears for decades, like The Ramones' "Blitzkrieg Bop," Black Box's "Strike It Up," that "Ole" song that the Montreal Canadiens have been beating to death, and (shudder) Europe's "The Final Countdown." At least you can set up custom soundtracks and ignore the bad stuff.

One of the best things about NHL 11 is how the realism constantly takes you by surprise no matter how long you play. Many arcade sports games reveal more flaws with every hour that you play. Here, the good stuff just keeps coming. Just when the game starts to feel a little predictable, something happens that you've never seen before, like a crazy deflection leading to a goal or an AI player showing off highlight-reel moves. Say hello to the new standard by which hockey games are measured. 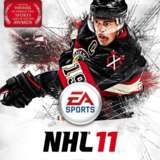 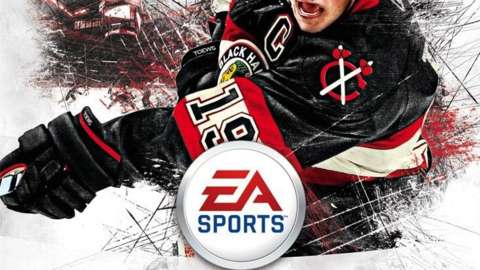 EA Sports brings back another installment of hockey with NHL 11.