EA makes its PSP NHL debut in NHL 07, a serviceable game of hockey that has its good qualities but also feels unpolished.

Up until now, PlayStation Portable-owning hockey fans have only had Sony's Gretzky series to play with, and while those games do play hockey, they haven't played particularly good hockey. NHL 07 for the PSP changes all that by delivering a solid handheld version of its console hockey series for the first time. All the gameplay modes and features you've come to expect from the series over the years are on hand here, and the on-ice action is quite enjoyable. It's not perfect, mind you. Clunky settings options, graphical hang-ups, and occasional artificial intelligence fouls bring the game down a peg or two, but mostly this is good hockey that handles the portable translation well.

If you're at all familiar with EA-branded hockey, NHL 07 on the PSP should be picked up relatively easily. None of the various right analog stick-based moves available on the console versions this year made it to the PSP (having no right analog stick will do that), but otherwise the controls are easily intuitive. Shots are mapped to the square and circle buttons, autodekes to the triangle, passing to the X button, and speed bursts to the right trigger. You can do some manual dekes by moving the left analog stick from side to side while skating with the puck, but that tends to be a bit more cumbersome than just using the autodeke function. Defensive play is handled similarly, with dives, body checks, poke checks, and hook moves all mapped to single-button functions.

The pace of the game is similar to the console versions of NHL 07. It's a fast-moving game of hockey that's a little more geared toward arcade-style offense than realistic defense, though scoring isn't quite as easy of a proposition here. Part of this is because aiming shots is more difficult in the PSP version, due in no small part to the tiny target icon that appears in the net when you're lining up a shot. Passing is also a bit unwieldy, making setups for more elaborate plays decidedly more difficult. On the flipside, goalies aren't overly intelligent, so you can very easily catch them doing stand-up moves when they should be diving, and vice versa. You'll also end up with your share of garbage goals, with pucks bouncing off goalies or going in at seemingly impossible angles. Defensemen are decent, however, and do a good job of staying within their allotted zones and protecting the net.

Hockey fans are sure to enjoy the on-ice gameplay, though they may be put off by a few of the interface issues. For one, in quick matches, the game defaults to a side-view camera for some odd reason. Of course, all the normal camera options are there at the start of a game, so you can switch to whatever you like. Just be sure you do it before you start the game, because once you're in, you have no option to change your camera view, or just about any of your other settings, either. There's also no in-game stat tracking to speak of, so you can't just pause the game and look at statistical data. These seem like particularly weird oversights, since so many previous PSP sports games have had all these features.

Outside of basic hockey play, you've got all the usual modes, including a full dynasty mode. This mode is a full-on copy of the dynasty mode from the PlayStation 2 and Xbox versions of NHL 07, strengths and weaknesses included. Of course, you have all the usual managerial options, like signing free agents, trading players, setting lines, drafting rookies, and the like. The mode also includes the basic player role-playing system, with players broken out into multiple categories, like snipers, power forwards, danglers, and the like. How you place these types of players on lines together determines their chemistry rating. Too many grinders on one line isn't going to get you anywhere, but spreading out your role-players so varied types line with each other is effective.

Unfortunately, the annoying owner-goals system has also transferred onto the PSP. Depending on what type of team you are (read: a good team with some prestige or a garbage team that couldn't win to save their lives), your owner will task you with specific goals at the beginning of each season. Good teams typically want to win playoff games or even the Stanley Cup, and not-so-good teams generally just care about keeping finances up and drafting top young talent. This shifts around as teams improve and decline, but the system remains annoying and restrictive, since if you continually fail owner goals, you're hosed when it comes to upgrades. One new addition to this system is the owner-trust factor. Depending on what type of GM you choose to be at the beginning of the mode (penny-pincher, boastful, average, and so on), you'll earn a certain level of owner trust from the get-go, and as you fulfill goals and win games, you'll earn more trust you can use to put toward team upgrades. This system replaces the cash system you used to buy upgrades previously, and ultimately makes getting upgrades more complex, rather than more fun.

One nice feature to the PSP dynasty mode is that if you connect up your PSP and PS2, you can trade dynasty-mode save files between the two, letting you take your PS2 dynasty on the go, or vice versa. Of course, this would also involve investing in two versions of the game, which might not necessarily be the best way to spend your money. But if you're a severe hockey nut, the option's there for you.

Beyond dynasty, you've got world tournament, season, free-for-all, shoot-out, and multiplayer modes. World tournament puts you into a world-league tournament with other international teams. Season is a single-season version of the dynasty mode. Free-for-all is a simple minigame where up to four players can go at it on a single rink, all vying for the same puck and trying to outscore the other players. Shoot-out is exactly what it sounds like: a shoot-out, and nothing more. All these modes are decent in their own right, though they've all been around in the series for a while (with the exception of the shoot-out, though that's not very exciting for other reasons). The multiplayer at least is both ad hoc and infrastructure based, so you can play other players in the room or go online. The online play has the usual functionalities, with head-to-head play, leaderboards, and the like. However, we noticed a significant amount of lag in most every online match we played. The connection would frequently stutter for seconds at a time, and actions would frequently get behind by a second or longer after button presses. Suffice it to say, your mileage may vary.

Graphically, NHL 07 definitely looks like a scaled-down version of its PS2 counterpart, but it moves at a nice clip and doesn't slow down much, though it'd be hard for it to with the ice and animations toned down as much as they are. Player models still look good, if a bit blocky, but the movements of the players are quite stiff, and texture seams regularly make appearances on the ice. It also bears mention that loading times are rather unpleasant when loading up a game (around 30 to 40 seconds, regularly), but once you're in a game, no more load times crop up. Recycled commentary from Jim Hughson and Craig Simpson makes up the bulk of the audio presentation, as there's no in-arena music while you're playing. And this commentary is most definitely recycled, probably from around the NHL 2005 era, if the references they make are any evidence. Hearing them talk about Pavol Demitra finding success with the St. Louis Blues, when he's traveled from not one but two other teams in the past couple of years, is just one example of how out of touch the commentary tends to be. On-ice effects sound good, provided you're not listening through the PSP speakers and have a nice set of headphones, and there's a prototypically emo-infused soundtrack to listen to while scrolling through menus.

Calling NHL 07 the best hockey game on the PSP is sort of a backhanded compliment, considering that the competition thus far has been middling at best. But despite what flaws it has, NHL 07 provides a fast and fun portable game of hockey that has enough depth to the package to make it worthwhile. There's certainly room for improvement, but it's a good, solid debut. 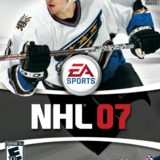