It's clear that NFL QB Club 2001 is trying to play catch up with Sega's NFL 2K series, and the way things stand, QB Club still has a lot of cleaning up to do before it can smell as rosy fresh as Sega's superior offerings.

Looking back, Acclaim's NFL QB Club franchise - much like its pitchman, quarterback Brett Favre - has seen better times. In the days when the Green Bay Packers superstar won his Super Bowl trophies, NFL QB Club amazed gamers with its high-resolution graphics on the then-superior Nintendo 64. However, times (and video game systems) change; Favre's once-dominating Packers have slowly deteriorated, while their fearless leader has taken his share of lumps and bruises.

The same can be said about the NFL QB Club franchise. With both a new console and developer on board, Acclaim hoped to continue QB Club's legacy on the Dreamcast last season. Unfortunately, the debut version stunk up the playing field like skunks in heat, and this year's version makes it clear that the series is still in the midst of a "rebuilding" process. Indeed, improvements have been made to NFL QB Club 2001, but thanks to AI deficiencies, control flaws, and other blemishes, the game still can't shake its malodorous reputation.

The game packs the expected modes of play - practice, exhibition, season, and playoffs - as well as a unique historic simulation mode that lets you play scenarios from the past 34 Super Bowl championships. The game also offers extensive managerial features: creating and trading players, running an NFL draft, customizing playbooks and player profiles, and building a new team from scratch.

Unlike the Nintendo 64 version, the visual presentation appears smooth and crisp. The Dreamcast's horsepower allows for extra eye-candy, such as crowds on the sidelines (which are seen up close in between some plays during the game), custom camera angles, and even the ability to save instant replays to the VMU. The realistic shadows and thousand-plus animations for touchdowns, sacks, and spectacular dives add to the visual flair - although all these extras can drag the game's pace down a bit.

The transitions between different player animations don't always quite mesh, which occasionally interrupts the flow of the gameplay. For instance, pass animations seem to occur before the ball arrives, which in theory should bring out a pass interference penalty. However, because the animations sometimes appear out of sync with the gameplay, it's anybody's guess if a penalty actually occurred or not. Overall, the title looks good enough but still has room for improvement.

Despite the strength of the graphics, the fallibility of the AI remains this franchise's Achilles heel. Although computer defenses seem more robust in terms of speed, they're still susceptible to trickery - such as sending receivers deep, then running a naked bootleg in the created gap, for instance. If you build your own playbook, you can exploit these AI flaws by going to an all-passing attack and using the quarterback as the sole rusher. The AI also exhibits a herd mentality that causes players to first crowd together, then run in choo-choo train fashion after the ball carrier. These aberrations show up on interior running plays and events such as fumbles, which is a problem because the crowds make it difficult to sort out where the ball and/or ballcarrier is.

Although the in-depth control proves responsive for the most part, it breaks down when it comes to the passing game. Receivers break off pass routes without rhyme or reason, and some receivers, after the ball's hiked, seem to pause at the line of scrimmage before running their routes. On occasion, the quarterback will pass to the wrong receiver unexpectedly. However, the worst instance of control "cheese" is when a totally wide-open receiver drops a ball thrown to him. There's a button to throw and a button to improve the chances of catching the ball. To use both and still wind up with an incomplete pass an alarming number of times - when the receiver is completely wide open, mind you - will likely prove distasteful to you and seem as though the AI is shortchanging you to compensate for a computer defender who got smoked. On the plus side, the game offers a new shoulder-charge command to add to the complex set of running moves such as stiff-arms and spins. In addition, called plays show up on the VMU screen, which gives you a chance to review pass routes before snapping the ball.

Thanks to the Dreamcast game's storage capacity, the audio commentary by Randy Cross and Mike Patrick holds its own, and the background audio (complete with trash-talking players) is acceptable as well. Still, the game seems to have a few woes to iron out, such as audio dropping out completely at the end of a game. The game sorely lacks needed features, such as being able to edit a saved playbook. Finally, the game program (a production version) crashed at one point while playing a season game, raising questions as to how complete this title actually is.

It's clear that NFL QB Club 2001 is trying to play catch up with Sega's NFL 2K series, and the way things stand, QB Club still has a lot of cleaning up to do before it can smell as rosy fresh as Sega's superior offerings. Only die-hard fans of Acclaim's long-running series should bother with this title. 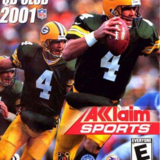