There is enough solid gameplay to make this the best football game around, on any system.

Avid video game sports fans might argue that a platform lives or dies by its football game. When Sega exclusively had John Madden Football (by EA Sports), the Genesis was the system for sports game fans. When a better version came out for the Super Nintendo, armchair quarterbacks took their dollars there. Last year Sony converted many Madden purists with NFL Gameday. And now there's Gameday 97 - a title that should be able to hold its audience while converting any remaining Madden holdouts.

Gameday 97 takes all the great options and features of the original and expands them with new options like season-length injuries, the NFL draft, more accurate statistics, and the ability to create players. More camera control is also included, allowing the player to place the camera at any angle. Every NFL team (resulting in over 1,500 players) and all stadiums are also available, which greatly adds to the game's immersive qualities. The end result is a souped up model of an already incredible game - a game that's sure to have players thinking they're controlling an actual broadcast game versus idly watching one.

The graphics of Gameday haven't been improved much, but its savvy use of motion capture technology heightens the realism, allowing players to react to hits more accurately. The game speed is also adjustable, allowing for up to 50 percent faster action than the original Gameday. The crowd sound effects have been joined by a play-by-play announcer, who is fairly accurate, although his responses sometimes come a little late.

The real focus of Gameday 97, however, is the gameplay. The control is dead on, making hurdling over a diving safety a distinct possibility. Making great one-handed catches, diving over the pile into the end zone, and even running out of bounds and slamming into a coach are all possibilities. The game itself also runs at a fast pace, with more time spent running plays than picking them (despite the fact that the 97 edition features twice as many plays as the original).

Overall, there are enough differences to justify purchasing Gameday 97, even if you already own the original. Even if you don't like some of the new features, there is enough solid gameplay to make this the best football game around, on any system. 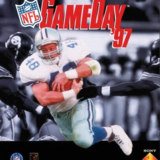