Blitz is the most addictive sports game ever created.

NFL Blitz is an arcade-style football game from the same team behind NBA Jam and NBA Hangtime. It packs the same punch as NBA Jam did when it was first released, with fast, loose gameplay that is as spectacular as it is addicting. While the PlayStation version is not arcade-perfect, it's close enough, with great gameplay and decent graphics.

NFL Blitz takes a few liberties with the rules of football. First of all, there are no penalties. You can dive into receivers long before the ball heads their way with no fear of getting called for pass interference. Secondly, it now takes 30 yards to get a first down. Given the scope and speed of this game, getting a first down every ten yards would have been far too easy. Also, the number of players on the field has been reduced to seven. There are 18 offensive plays and nine defensive plays, as well as plays for punting, a fake punt, field goals, and fake field goals.

The gameplay moves along very quickly once you've gotten a basic feel for things. The plays are pretty straightforward at first, though there are tons of different things you can do on each play, so as you play the game more and more, you'll figure out more and more little tricks. There are specialty moves like spins, dives, and stiff-arms, all of which will help you to gain more yardage when used appropriately. Pitting two players of the same skill level against each other turns the game into a strategic, nearly chess-like battle, while mismatched players can use the game's CPU assist, which helps people come from behind, keeping games close. Once you get reasonably good at the game, however, you'll want to disable the assistance and be judged purely on your own skill rather than rely on the cheap comebacks that the CPU assist provides.

The PlayStation does a good job of handling Blitz's graphics. It has been dropped from 60 frames per second to 30, and the field and players are significantly blockier, but the game runs at a very fast, very constant speed. The colors aren't quite as vibrant as the other versions of the game, but it still looks favorable.

Some extra speech that wasn't included in the arcade version has been added to this version, but you'd hardly notice. The speech is pretty random at times in terms of timeliness. Some phrases will be timed just right, but occasionally the announcer will announce the catch of a pass (or, in extreme cases, the throwing of one) after the play is already over. All the non-game music is intact, but the actual gameplay is without music.

The PlayStation version of NFL Blitz exposes Sony's NFL Xtreme as the cheap pretender it really is. If you're after arcade-style football, look no further than Blitz. It's easy enough to learn that even those of us that don't like sports games can easily get hooked. Blitz is the most addictive sports game ever created. Don't even rent Blitz. Just go buy it. You won't be sorry. 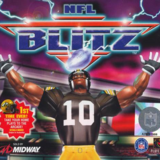