Pass interference is no longer a penalty - it's a necessity.

Sim-style football got you down? Can't seem to get into NFL 2K, no matter how hard you try? Me neither. Luckily, for people like you and me, there's another football game on the shelves in time for the Dreamcast's launch. That game is NFL Blitz 2000, and its gameplay is about as far away from NFL 2K as you can get while still playing a football game.

Gone are the rules and regulations of standard football. In the world of NFL Blitz, each team puts seven players on the field. Also, it's 30 yards to get a first down. Those are about the only real rules in the game. Pass interference is no longer a penalty - it's a necessity. Late hits are also welcome here, complete with body slams and right hooks. The offensive playbook is packed with passing plays. You can execute running, but it's accomplished more through hitting your receivers before they cross the line of scrimmage than through actual handoffs.

The game is based on the arcade version of NFL Blitz '99, but there are a few newly added features that make the game feel fresh. You can now create defensive plays, control your punts, and use a new icon-based passing system called blitz passing. Blitz passing is good for people that are used to the sim-styled standard of icon-based passing, but most fans of Blitz will want to stick to the standard point-and-shoot passing system. Team rosters have also been updated in the game, reflecting trades as well as new teams like the Cleveland Browns. Also, the season mode that debuted in the original NFL Blitz games on the PlayStation and Nintendo 64 has found a new home on the Dreamcast. Here you have to deal with differing playbooks and more accurate strengths and weaknesses in your quest for the Super Bowl victory.

The graphics are identical to those in the arcade version of the game. The players and field look nice, and the game runs at a very high, very smooth frame rate. The sound effects and speech are well done, and several new phrases and taunts have been added to this year's game, but overall the sound is a little tinny. The Dreamcast's analog pad suits this game very well, but expect to spend a few hours getting the hang of accurately performing diving tackles, as it's easy to miss with a controller this precise.

The gameplay is also a perfect translation of the arcade game. The deep strategies of trying to outthink your opposition have even been enhanced a little bit here, since you can use the VMU to see which play you're picking even after you've hidden your on-screen play-select cursor. But other than that it's business as usual, with fast double or triple passes, huge sacks, and hours spent trying to perfect a new twist on an old play to give yourself another weapon against your opponents. The AI is also a little smarter this year, though it will still cheat to keep the score close right up to the end.

Whether you're the biggest football gamer on your block or you haven't touched a pigskin game since 10-Yard Fight, NFL Blitz 2000 is a fast, fun football game that is sure to please, particularly in its two-to-four player modes. 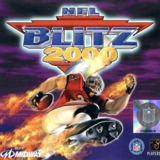