With NFL 2K's incredible control, you feel as though you're down on the field with the NFL's finest.

For anyone who hasn't actually seen the game on a TV right in front of them, the screenshots look too good to be true. In fact, when you see NFL 2K for the first time right in front of you, they still looks too good to be true. Even when you have the controller in your hands and you're playing the game, you still shake your head in disbelief play after play. That's how good NFL 2K looks, plays, and sounds.

The game has the full NFL license, including all teams, players, and several modes of play: practice, tournament, season, fantasy, exhibition, and playoffs. There's even a tutorial mode for beginners that lets you play with help windows that explain the controls and various things to help you get started. Also included is the now-standard create-a-player mode. NFL 2K's is fairly in-depth and lets you change a player's height and weight, as well as add minor touches like elbow pads and nasal strips. You can also create your own offensive and defensive plays and customize your own playbook. You can pick the onscreen, which is fine when you're playing a one-player game, but the way to go when you're playing multiplayer is with the VMU play calling. You can pick the plays by looking at the VMU screen in your controller, making it impossible for your opponent to know what play you called.

Any die-hard football video-game fan knows that a football game's graphics, features, and extras only go so far. When it comes down to it, a game is totally about the control and AI. NFL 2K delivers both, with precise analog control and an easy, intuitive button layout. It really lets you play the game of football instead of worrying about complex controller and button combinations.

The controls are great. The analog stick lets you move players where you want, when you want, and at the speed you want. It's so awesome when you barely press on the stick before a play and see your linebacker creep up toward the line just a little bit and then bust into a full sprint as you press the stick all the way just as the ball is snapped. Aside from the precise movements of the players, you can also pass the ball precisely where you want it by using what the game calls Maximum Passing. It's similar to NFL Gameday's Total Control Passing in that you can throw the ball out in front, to the left, to the right, and behind your receiver. This of course lets you throw the ball in the direction your receiver is most likely to catch it, while at the same time it keeps the ball away from pesky defenders. You do this by simply pushing the analog stick in the direction you want the ball to go (the farther you press, the farther in that direction the ball will go), and then push the appropriate button for the receiver you wish to throw to. This Maximum Passing feature isn't necessary for you to play, but the level of control that it allows you to have is so great that once you get used to it you'll realize it's the only way to play.The computer AI has always been a huge issue for football-game fanatics; money plays that always work combined with a one-dimensional computer defense and offense can quickly ruin the fun you find in every play. NFL 2K has an unbalanced set of teams that accurately depicts the action in the NFL in that some teams can pass, run, and defend better than others. Some teams allow you can air the ball up against them and they won't be able to do anything, while other teams have great cornerbacks that will intercept the ball or break up passes nearly every time you go to the air. The Dallas Cowboys run the ball extremely well, while the 49ers have a great passing game. Its just like the real NFL in that you'll have incredibly close games that come down to the wire, and in other games you'll have boring blowouts. The only modifier to this is the option the game gives you to choose between the three difficulty settings, Rookie, Pro, and All-Pro. Rookie is the default setting, and it's outlined at the start of the game as a super-easy mode that allows you to get the controls down. Once you start to manhandle the computer on that setting, you can bump it up to pro and really start to learn. All-Pro is hard. Those games will swing one way or the other, but they'll usually swing in the computer's favor. You really have to know what plays to call, and when to call them, or the computer will roll you. In either event, the computer is extremely intelligent - when the computer is down on points and time is running low, it spikes the ball to stop the clock when it doesn't have anymore time-outs, and it plays without huddling. The computer moves its players away from the ball when the punt is within ten yards of its own goal, and toward the end of the game it kills the clock when it's in the lead by taking a knee and letting the play clock just about reach zero. It's awesome.

Visually, NFL 2K is incredible. This level of visual detail in a sports game is unprecedented - you can see the players' hands reach out and grab the ball. Heck, you can see the laces on the ball and the holes in the jerseys. The players resemble their real-life counterparts and move realistically, thanks to the more than 1,500 motion-captured animations with multiple animations for tackling, catching, and falling. This makes every play and collision look as it should, instead of just some random animation. Players put their arms out in front of themselves when falling, and they react realistically to multiple hits. Additionally, the collision detection of the players - whether they are on the ground or battling for control of the ball in midair - is outstanding. Not only do the players look great, but sideline spectators and photographers - although composed of only 2D sprites - add a nice effect and mood to the stadium. Each field is modeled after the real one, and each comes complete with team specific signs and slogans. For instance, you'll see a sign hanging that reads Forever Young when playing in San Francisco.

Besides its obvious visual quality, the sound, music, and commentary really add to the game's incredible presentation. The announcers, stadium music, crowd, player grunts, and groans sound equally realistic. Numerous announcers call the play-by-play action, provide color commentary, and even give reports from the field about the injured players and coaching strategy. The quality of the announcers is really quite extraordinary, not only because of the announcers' super-fast reaction time, but also because of its diversity and flavor. You hear them banter back and forth about individual players and their performance.

With NFL 2K's incredible control, you feel as though you're down on the field with the NFL's finest. It's got graphics that look great and move flawlessly, and sound that makes you feel as though you're on the bottom of the pile during the action and sitting on the couch when watching replays. NFL 2K is a truly amazing football game that is nearly flawless in every regard. If you're a football video-game fan, NFL 2K is reason enough to buy a Dreamcast. 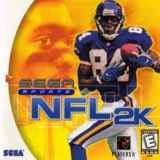