Next Stop Nowhere Review – Bugs On The Windshield

A slight adventure with likable characters is marred by a lack of meaningful choice and horrific bugs.

Next Stop Nowhere gets off to a promising start. You play as Beckett, a sci-fi courier who pilots a spacecraft and is best friends with an AI program. While visiting a bar, he meets Serra, and gets embroiled in her family drama when he learns that she’s trying to track down her wayward thief son before the authorities can get to him. The game is framed as a sort-of road trip through space, where the choices you make will change how the story plays out. At first, the charming characters and intriguing plot are enough to pull you from one location to the next. But unfortunately, a lack of meaningful consequence and a plethora of horrific bugs make for a trip not worth taking.

Next Stop Nowhere is, by design, a very simple game. You guide Beckett by touching where you want him to go, and the points you can interact with in each map are highlighted with big white circles. There are, essentially, no puzzles--moving forward is simply a matter of interacting with every object signposted in a room, and it’s all but impossible to get stuck. It’s a slightly awkward control system, as I found that Beckett often did not go where I wanted. There are also a handful of sections where you fly your ship through dangerous areas, piloting it with simple touch controls between floating debris and avoiding other ships that try to ram you. These sections offer some variety, although there are only a few of them. Judging the distance between your ship and the objects you’re trying to avoid is difficult and the degree of control you are offered is quite limited, but they’re also the best indicator the game gives of the vastness of the space you’re exploring--each of the game’s locations is otherwise very small.

This is an adventure game that focuses largely on the choices you make, and how (or whether) they impact the story. Choices rarely have huge ramifications, and I never found myself having to think about what to do for long. Most decisions boil down to dialogue responses to things other characters say, and framing what sort of relationship you want Beckett and Serra to have. A few of the choices you have to make are framed as though they have major implications within the story, like if you should wipe a robot’s memory or try to reprogram it to be nicer, or whether you should hold a character captive or let them go after they hack into your ship’s computer. However, by the time the credits roll, most of these decisions end up feeling inconsequential to how things played out--if they factored in at all.

Next Stop Nowhere certainly has character, at least. Beckett and Serra are both likable, thanks in large part to the excellent vocal performances of Joshua Alexander and Elizabeth Saydah, and the game is at its best when the two characters are simply chatting about their lives and interests, joking and sharing anecdotes. Serra’s complicated relationship with her son, Eddy, makes the search for him more exciting than it would be otherwise, as the details of the crime he committed aren’t interesting. Instead, I was compelled by the promise of an awkward family reunion and learning more about Serra’s interesting backstory and complex characterization. Serra is a character who is clearly trying to move on from the sins of her past, and having the player decide how Beckett will react both to the person Serra has been, and weigh it against who she is right now, is the game's most successfully realized element. The striking art style, sharp character designs, and boppy soundtrack all help to make the game intermittently charming, until the game’s numerous bugs and issues set about sapping any good will built up.

The plot in my play-through of the game ended up being all over the place due to a mix of bugs and writing problems. As I got near the end, it became clear that my choices were either being ignored or reversed. In one instance, my ship’s on-board AI (named Cody) was hacked, and Beckett made a huge deal about not being able to operate the ship without it. I walked into my cockpit, accessed my map, and picked the next location… and without any fanfare, we took off. Cody was restored in the next cutscene as though nothing had ever happened, and characters that hadn’t been on the ship previously were suddenly there.

In another instance, a character needed a med pack to heal an injury, and in the next location I picked one up from a convenience mart. When I returned to the ship, the game informed me that I had failed to procure anything to heal the character with--but then they were fully cured anyway. In another, the game crashed in a cutscene after I made certain dialogue choices and then crashed in the same spot again when I reloaded; it wasn’t until I changed my choices that I was able to progress. Sometimes the music would suddenly cut out, or a character would start vibrating in the background during a cutscene, or something else would happen necessitating a restart. On a few occasions, the game would tell me that I had made a certain choice earlier that I most assuredly didn’t.

These are just a few examples--it’s hard to know which choices the game ignored or reversed, because consequences for your actions rarely stretch beyond a few lines of dialogue anyway. There’s one instance early on where you have to choose between two locations to visit, but this ends up being an isolated example, and I found myself caring less about the choices I was making as the game progressed. The game even has the temerity to set up a Mass Effect 2-style scenario near the end that should, in theory, rely on your knowledge of the game’s characters to delegate tasks, but your choices have absolutely zero impact on how things play out. While I suspect that things could play out ever-so-slightly differently if I ran through the whole game again, I’m in no hurry to do so.

Most of these issues hit late in the game, and the first half is distinctly, noticeably more well put-together than the back half. As the game moves towards its conclusion, it starts introducing new plot concepts and characters that aren’t given much room to breathe, and some seemingly-interesting characters are introduced and then shuffled out of the game so fast that it feels like a waste to have introduced them at all. There’s a romantic tension between Beckett and Serra that I enjoyed early on, but I couldn’t tell you what happens to them at the end of the game; the final cutscene played both of their dialogue simultaneously so that it overlapped, making it impossible to parse. By this point, it felt like the game was flat-out messing with me; for the proceeding hour and a half, I’d had to restart the game five times because cutscenes didn’t progress properly, and my investment in the story had flatlined.

With all the bugs ironed out, Next Stop Nowhere would have been a pleasant, albeit inessential, jaunt with some interesting characters and a disappointing lack of consequence. In its current state, it’s a broken, frustrating experience on top of that. As an Apple Arcade exclusive, Next Stop Nowhere isn’t asking for additional payments beyond your subscription, but right now it’s not worth the time you’ll have to invest to finish it. I like Beckett and Serra, and I’d love to be on board with their road trip through space; unfortunately, the game gets a flat tyre midway through that it never replaces.

View Comments (0)
Back To Top
3
Bad
About GameSpot Reviews 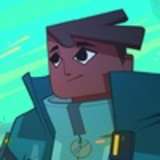 James O’Connor spent about four and a half hours getting through Next Stop Nowhere, including multiple reloads. The game was played on an iPhone 8 Plus with an Apple Arcade subscription he purchased himself.