In the pursuit of platforming perfection, few games have come as close to achieving it as those devoted to Mario. His surgically precise leaps, and the unnervingly cutesy but expertly crafted worlds of the Mushroom Kingdom, give rise to platformers by which others are judged--and which so many other games imitate. New Super Mario Bros. 2 is a familiar take on a formula that has worked wonderfully over the past 25 years, but despite some fun, nostalgic moments, its level design fails to reach the lofty heights of its fabulous predecessors.

Such familiarity also raises the question: What exactly is new here? The story, where Princess Peach is helplessly dragged away to yet another castle is a tale that feels as old as time itself. Mario's thoughtfully concocted plan of rescue--stomp on everything that moves while ingesting copious amounts of state-altering mushrooms--is hardly going to catch Bowser off-guard either. And as you leap your way through more than 80 courses of platforming challenges, your mind is drawn to the familiar so immediately that it's difficult to see what has been added.

You jump, and you stomp, and you smash. The bright 2D levels challenge you with platforms that swoop furiously around the screen, disappear in midair, or creep along the floor like expeditious slugs on a sun-baked sidewalk. Pipes deliver you underground to solve short block puzzles and to the ocean to defeat the dreaded jellyfish armies, or catapult you to hidden areas of the map where the coins are plentiful and the obstacles are minimal. Mario's many suits let you unleash fireballs, fly through the air, and--in the only noticeable addition--turn blocks of stone into rivers of gold. It's all so familiar, and all so…regular. There's a lack of variety and imagination to the level design that makes the stages some of the blandest and most repetitive to ever grace a Mario game. That magical Mario spark that promises new and brilliant ideas each and every level is painfully missing.

But even at its monotonous worst, New Super Mario Bros. 2 remains a thoroughly competent and enjoyable platformer. You leap around the screen with the tight precision of a gymnast, collecting coins and bringing swift, brutal revenge to the many weird and wonderful assailants of the Mushroom Kingdom. Some levels require precise, well-timed leaps across vast chasms, while others require more methodical hops over streams of Bullet Bills and meandering Bob-ombs. Others still are all about sheer speed, with the screen pushing you swiftly onward while you manoeuvre your way around vicious spikes and fireballs.

There are, of course, many secrets to uncover too, a few (perhaps too few) of which challenge veteran players and push newcomers to the brink of frustration. With star coins, red coins, warp pipes, extra lives, and so much more to discover, New Super Mario Bros. 2 is an addictive pastime, and compelling enough to keep you entertained after you defeat Bowser and his crew of subordinates. And if you don't mind hurtling down a path of self-destruction, you can collect more than a million coins, which is expedited by a bevy of coin-spilling contraptions and hidden blocks.

Coin Rush mode further pushes those shiny chunks of gold, challenging you to complete three-level runs against the clock, without dying, while collecting as many coins as possible. The fun lies in the challenge, and in the bragging rights of attaining a romance-destroying high score. Sadly, without online leaderboards, you're limited to only sharing that score with others via SpotPass, which limits its appeal. With so many coins to collect, extra lives are bountiful commodities that--when coupled with the dull level design---make things too easy. So too does the sparkling white tanooki suit that grants invincibility, should you fail a level one too many times. It's your choice whether or not to indulge in the suit's life-saving powers, but bear in mind that the shame of its use is forever reflected in your profile stars, which lose their shiny gold lustre.

Cooperative play lets you enlist a buddy's assistance, and is similar to co-op in New Super Mario Bros. Wii, but nowhere near as commendable. Here it's limited to two players, and there's no sign of the on-the-fly screen resizing that made galavanting around levels and stomping heads such fun. Instead, it's a constant battle to stick together, lest you get separated, trapped in a bubble, and left to float around aimlessly while you wait for your partner to free you.

It's a shame that the co-op fails to live up to the heady heights of its Wii counterpart. But then, its halfhearted implementation is indicative of a game that's very much a by-the-numbers Mario experience. Sure, there are some throughly enjoyable moments to be had, and at times a little of that Mario brilliance shines through too. But it's overshadowed by a real lack of imagination in its level design, which makes New Super Mario Bros. 2 little more than a retread of past glories. A fun, and sometimes challenging retread in parts, but a retread nonetheless. 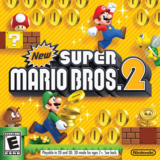