New Super Luigi U may not offer new worlds or powers, but its emphasis on skill and precision reinvigorates the series in a meaningful way.

At first glance, New Super Luigi U looks like any other New Super Mario Bros. game, except that you now control Mario's skinnier, floatier brother, Luigi. Oh, if only it were that simple. There's much more to New Super Luigi U than just a new set of overalls and rearranged assets, including an increased difficulty curve, but it's Luigi's physics and the brevity of each level that set New Super Luigi U apart from its older brother--in a good way, too. The most intriguing part is that it may take place in an alternate dimension where Mario is dead.

Look at the facts. The game begins in the exact same manner as New Super Mario Bros. U: Bowser, aka the King Koopa, storms Princess Peach's castle with his koopalings in tow, imprisons the princess, and tosses everyone else to the edge of the Mushroom Kingdom. The only difference between the two games' intro sequences is Mario's absence from the dinner table in New Super Luigi U. Only his hat remains, which is a reminder of the sublime plumber's legendary exploits. At no point does he appear in the game, "Bros." is no longer in the title, and once you've defeated Bowser, Luigi can take on Mario's movement characteristics via an in-game item. To put it another way: Luigi allows himself to become possessed by Mario's spirit. Yeesh.

Each level kicks off with the series' iconic 100-second warning, your first clue to the new time limit. Your first instinct might be to rush ahead, but do so, and you quickly learn that Luigi exhibits very different physics than old Mario. For example, when Luigi tries to reverse his direction during a sprint, his increased momentum keeps him moving in his original direction for a second longer than usual. Luigi also jumps noticeably higher and can float in midair if you continue to hold the jump button at the top of his arc. In essence, he's very much like he was in Super Mario Bros. 2 on the NES. Though it may take you a moment to adjust to his footwork, he still exhibits the responsive controls the series is known for. Luigi's tendency to float and slide, along with the new time limit, gives New Super Luigi U a feel all its own.

This is good, because otherwise, you might confuse this with a simple remix of New Super Mario Bros. U levels. Though the world map, themes, power-ups, and visual assets are "old," Luigi's physics and the level design at large rise to the top. It isn't just that the arrangement of elements is different this time around. It is, but in keeping with Mario tradition, the placement of platforms, enemies, and runways is tailored to the lead character's capabilities. These paths are most obvious when approaching flagpoles, where a handful of blocks are arranged for well-timed triple jumps, but they can be found throughout most levels when you look for them. Given how short the new levels are, you often feel compelled to speed-run them after discovering these unspoken paths, but player beware: with Luigi, sloppiness is usually punished by death.

Whether you're trying to collect elusive star coins or speed-run a punishing level--the game's real challenges--you're going to die frequently in New Super Luigi U, but it provides you with the tools needed to avoid the progress-crushing Game Over screen. It's common to find 1UP mushrooms hidden in blocks near the start of most stages, and landing on the tops of flagpoles at the end of levels is easier than ever thanks to Luigi's enhanced jump, making them an excellent source of extra lives. The game always provides a way to recover lost lives, which may involve backtracking or cautious play, but ultimately, New Super Luigi U's greatest challenge is the chase of perfection, not survival. It can be punishing, but to call it difficult overall doesn't give due credit to its finely tuned flexibility.

Some levels are choreographed so well that it’s not unheard of to occasionally breeze through one in less than 20 seconds. Granted, this requires excellent coordination and focus on your part, but it’s these moments that highlight the joy of mastering Luigi’s physics. When you can start off with a sprint and continue to triple jump, flip, and head stomp your way to the finish line without hesitation, there’s no greater feeling in this game, or New Super Mario Bros. U, quite like it. And with the levels as tightly composed and short as they are in New Super Luigi U, there are plenty of opportunities to discover the joys of a faster, riskier take on the Mario Bros. formula.

Of note is the return of Nabbit, the pesky robber-rabbit from New Super Mario Bros. U, who’s now playable during co-op in Mario’s absence. He controls much like the secondary Toads that populate the rest of a four-playable squad, with one major exception: he’s impervious to common enemies and environmental hazards. Being a plucky thief, his particular set of skills comes in handy when trying to acquire coins, but his considerable advantages come at a cost: he can’t use power-ups. This can be problematic when a player on their last leg misses the chance to power-up because Nabbit inadvertently wastes a nearby mushroom or fire flower, but on the other hand, he can bypass challenging enemies with ease, thus leading the way for other players to pop into a bubble and catch up with him. He’s not a game changer, but rather a nice change of pace from the likes of Toad and Mario.

Nintendo has done a good job of creating a "new" experience out of old rags. You're still on a quest to rescue Princess Peach, and the same old Mario mechanics persist, but the challenges along the way feel different. Never have levels been this short, nor the emphasis on perfection so explicit, and these elements work in New Super Luigi U's favor. You don't need to be an expert player to save the princess, but there's room for advanced play in speed-running levels, collecting star coins, and, ultimately, tackling the legendary Rainbow Road. It can be a challenging game if you elect it to be, but it's accessible to a wide range of skill levels. The story is a compulsory component devoid of originality--unless Mario's not only missing but actually dead--and the lack of new power-ups or themes is disappointing, but underneath it all is a positively twisted take on the Mario Bros. formula, and it's an excellent add-on to New Super Mario Bros U.

View Comments (570)
Back To Top
8.5
Great
About GameSpot Reviews 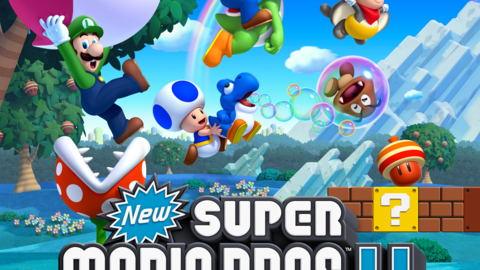