ProStreet is a solid racing game, but it's missing most of what made the previous games in the series interesting.

It can't be easy to be a game developer in charge of releasing a new game in a series every year. People don't want the same game over and over, yet they're unhappy if the game strays too far from the established formula. EA deserves credit for trying something different with Need for Speed ProStreet, but the new direction of the series fails to live up to the level of the previous games. There's still a solid racing experience here, and the online component of the Xbox 360 is quite good; but the game's premise is uninteresting and the in-game advertising is over the top. In the end, ProStreet is just another decent but uninspired racing game.

Unlike the last two Need for Speed games, which told the story of an underground street racer through campy yet entertaining cutscenes, ProStreet follows the legal street racing career of Ryan Cooper. The game still uses cutscenes to try to instill some story into the proceedings--something about Ryan getting dissed by a big-time street racer--but it's uninteresting thanks to terrible voice acting and unlikable characters. Ignoring the story, it's your goal to head to different events, dominate them, challenge the best of the best, and then take on Ryo, the man who disrespected you after your first race.

Thanks to the sheer number of race days you'll need to win, it will take a long time to get to Ryo. Each race day consists of a number of different events. Most of these will be familiar to anyone who's played previous Need for Speed games. Grip races are standard races with eight cars on the track, and your goal is to finish first. Other events have you trying to get the fastest time or highest speed through checkpoints, or the best time out of your class of cars. Drift racing is back, but has been revamped and is actually fun this time around since you don't lose all your points for going off the track. You'll also be doing a lot of drag racing. It's fun for a bit, but gets old quickly thanks in no small part to the preceding minigame in which you have to heat up your tires--it's lame, and you have to do it before each of the three rounds. While there's no shortage of events, there isn't a whole lot of variety. Many of them feel the same--you just want to go fast. This makes the game grow old quickly, a problem when there are so many events to slog through before you reach the end.

The game also grows tiresome because the action on the track just isn't that exciting. Some of the later cars you unlock, like the Lamborghini and Zonda, are superfast, but for the first 50 races you'll be racing some rather pedestrian vehicles. Since you're on a track there are no shortcuts, so many of the courses end up feeling the same, especially since a "new" course is just an old one with a few different turns. Most importantly, there are no cops. Getting chased by the five-0 was easily the best part of the last few games, so its omission here is huge. Damage plays a more pronounced role this time around; you'll have to repair damaged cars, but you always have enough damage-repair markers to take care of things. You won't even need these markers on the Wii and PlayStation 2--you really have to slam into something incredibly hard to register even a slight amount of damage. This is understandable on the Wii because the default controls aren't very good. Holding the Wii Remote flat in your hands and tilting it up and down to steer works OK most of the time, but sometimes, particularly on tight turns, the game doesn't recognize your movement, so your car will straighten out and usually end up in a wall.

While you always want to win a race day, that's not your only goal. You'll need to dominate as many race days as possible to unlock new events. After each race you're awarded points based on where you placed, how fast you finished, and how much damage you took. If your combined score for all the events breaks the old record, you've dominated the race day and you're awarded with a prize like cash or parts for your ride. You don't always have to race perfectly, but you'll have to win most of the events to dominate. This is made difficult because you can bring only a few cars into each race day--one for each event--so if your car can't hang with the other rides, you're in trouble. All is not lost, though. Like in other NFS games, you can purchase new cars or upgrade your ride to improve performance. And like in the last game, you can sculpt certain aspects of your cars' bodies to make them more aerodynamic. This time you even get to use a wind tunnel. It looks cool, but it's not that useful. Nor are all the visual customization options, because it seems that you can't use your rides online. The tool for putting on decals and vinyls is similar to what is found in Forza 2, but not quite as deep.

PlayStation 2 and Wii owners are missing out on ProStreet's best feature: its online component. On the Xbox 360 you can create your own race day by picking a location, race types, and even what cars can participate. You can then play these race days online in ranked and unranked matches. There was some lag and the racing was a bit choppy, but it was still fun--you can really build up some good rivalries by racing the same people in multiple events during an online race day.

Though not everyone gets in on the online fun, all four consoles get a piece of the avalanche of advertising that permeates the game. Sure, races in real life are heavily sponsored, but ProStreet takes it too far--there's nary a stretch of track where there's not some sort of advertisement for motor oil or car insurance. It doesn't seem possible, but 360 owners get to enjoy even more advertising thanks to dynamic ads that will be downloaded when you start the game up for the first time. Even better, some of the achievements are sponsored by a car insurance company. It's too bad that the cost of the game and the ridiculous amount of advertising isn't making EA enough money--on the Xbox 360 you can use real cash to unlock cars and upgrades. It costs $25 to unlock every car and upgrade. Every single time you go to buy a car, you're asked if you want to use in-game cash or Microsoft points. You don't even need to have unlocked a car to be able to purchase it with Microsoft points, which is really unfair since you can use that unlocked car to zoom right to the top of the leaderboards on the early courses.

It shouldn't be surprising that PlayStation 2 and Wii owners also come up on the short end of the stick with regards to the visuals; it isn't a good-looking game on either system, though the Wii does support progressive scan. The cars look OK, but there's a lot of aliasing, particularly on the tracks, which are so jaggy that it's tough to see where you're going when you're driving at high speeds. The PS3 and 360 versions look very nice--particularly their cars, which look fantastic. They look great when they're shiny and new, but they look even better when they're all smashed up. It hurts your wallet when you total a car, but it sure is entertaining to watch the windshield shatter, the bumper fall to the ground, and the hood peel away like a sardine can lid. As mentioned earlier, the game doesn't give off a tremendous sense of speed most of the time. This is partially because you'll spend a lot of time driving slower cars, but also because the frame rate isn't very fast and is frequently choppy. Everyone gets in on the terrible career menu, which is ugly and difficult to navigate.

ProStreet's audio isn't very good. This is mostly the fault of the game's announcers, who are poorly voiced, have a terrible script, yell into the microphone, insist on calling you by your full name every time they refer to you (which is hundreds of times over the course of the game), and basically do everything they can to get on your nerves. The cars sound OK, but there's not a whole lot of variety to the engine noise. The music isn't anything exciting, either, and you'll hear the same songs dozens and dozens of times over the course of the fairly lengthy career.

What it all boils down to is that without the story, cop chases, and open world of the last two Need for Speed games, ProStreet is just another racing game. Other than a nice online mode on the 360 and PS3, its only truly distinguishing feature is its amount of advertising, which makes an already uninspired game feel even more soulless. 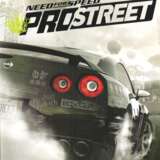