Those of you who've played Madden for the PlayStation 2 and are expecting NCAA GameBreaker 2001 to be a similarly fantastic game will be terribly disappointed.

NCAA GameBreaker 2001 for the PS2 is little more than a flashier version of the PlayStation game. The game has some new features and options here and there, but at its heart, the gameplay is identical, which is great for die-hard fans of the GameBreaker series who are looking for a better version of the original. Anyone looking for another Madden will be terribly disappointed, though, as the game has more in common with its PlayStation counterpart than Madden for the PlayStation 2.

NCAA GameBreaker 2001 has all the modes of the earlier PlayStation versions, including bowl season, scrimmage, tournament, fantasy game, and coaching career. In the coaching career mode, you can operate as a coaching hopeful. You enter a small school as a low-profile coach and try to move up the Division I-A ladder and ultimately land a job as a head coach. The game's athletic department allows you to view rosters, recruit blue-chip players for several positions, and create walk-ons. The create a walk-on mode lets you change everything from the player's appearance to his ability.

NCAA GameBreaker 2001 plays well, mostly because it features the proven gameplay elements of the GameDay and GameBreaker series, such as the total-control passing and running. Total-control passing lets you lead, overthrow, and underthrow your receivers so that you can throw more completions and prevent pesky defenders from intercepting your passes. The total control features in GameBreaker really make you an active part of each play's success. This sense of control is really the only thing that GameBreaker 2001 has going for it.

Visually, NCAA GameBreaker 2001 looks more like a PlayStation game than a PlayStation 2 game, unless you're comparing it with NFL GameDay 2001 for the PS2, as the two games use the same engine. The player models aren't very smooth or very different from one another. The animations of the players are too similar to one another - they run up and down the field like a band of soldiers. Even though Sony claims to have scaled all the players in the game to accurately reflect their real-life counterparts, the game uses just a few basic model types. There's an athletic build for the quarterbacks, receivers, and cornerbacks. Linebackers basically have two types, one large-but-fit model and one large-and-obese model. These standardized character models - along with the game's uniform animations for catching, running, tackling, and so forth - give NCAA GameBreaker 2001 an artificial look that practically ruins the experience.

In the audio department, Keith Jackson has returned again to provide color commentary and observations that help give the game a realistic feel. In addition, the game's school-specific bands and songs add a bit of atmosphere to the experience. Some of the sound effects are fairly realistic, while others - including the game's bone-crunching tackling sound effects - are a bit over the top.

While NCAA GameBreaker 2001 doesn't look or play as good as Madden, fans of the GameBreaker series will undoubtedly enjoy the sharper graphics of the PlayStation 2 version. Hard-core fans of college ball will also get a kick out of playing as their favorite teams, hearing the fight songs, and progressing through multiple seasons. However, those of you who've played Madden for the PlayStation 2 and are expecting NCAA GameBreaker 2001 to be a similarly fantastic game will be terribly disappointed. 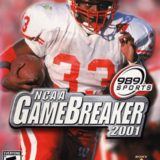