Is NCAA 2001 different than last year's title, or the year before that? Nope, it's pretty much the same experience with a few new tricks.

NCAA Football has been the longtime leader of its genre for several good reasons. It plays like a dream, and it stokes up the ol' college spirit better than any other. Now if it could only nab announcer Keith Jackson away from 989 Sports' GameBreaker, it would be just about perfect.

A few years back, NCAA Football was nothing more than an afterthought to its big brother, Madden NFL. Currently, its popularity is legendary among college students and equal opportunity football fans alike. Initially, the title consisted of a recycled Madden engine and a plethora of 1-AA and 1-A teams. Making the sim a unique entity was not foremost on EA's agenda. In the past few editions, however, EA has settled on a decent game engine, only tweaking it from year to year to include more advanced AI and other doodads. Now on its third incarnation, the series might leave some itching for a change, especially when the current Madden engine is so superior.

Is NCAA 2001 different than last year's title, or the year before that? Nope, it's pretty much the same experience with a few new tricks. It's somewhat disappointing to see another PS version glide in looking and playing the same. Even the world's biggest fans of the game would like to see some innovation. Still, if you can get over your disappointment, there are some interesting new features.

If you've played NCAA Football, you've experienced the joys of running an option offense. It's a simple maneuver wherein you, the quarterback, roll to the right or left with a halfback or fullback in tow. If the field is open, tuck the ball and run. If it looks bleak, lateral the ball to your running back. It's more than a play - it's an art form. Once you master it, you can dominate every team in the game.

This year there's a new twist to the option, as well as to the entire offensive format. The advanced player control feature (APC) lets you control any man on the field. It's simple to use and surprisingly fun. It's like playing multiplayer co-op with the computer. Before the ball is snapped, you scroll through the players and select one you'd like to control. Once the play is in progress, it's your responsibility to find the open field as either a receiver or running back. It forces you to understand the play before it's executed. The reason being, the quarterback won't blindly throw it your way if defenders surround you. You must find the open hole and call for the ball. If you don't do it quick enough he'll find a different receiver, which is a credit to the game's AI. In addition, you can play as linemen, but it's not half as fun. The question remains, however, of whether or not the APC feature is entertaining enough to warrant a purchase.

The most interesting changes are the name-your-player option and the momentum meter. Everyone knows that, due to NCAA regulations, publishers cannot call out the real college players by name. With this new feature, there's nothing to stop you from putting the current names on the appropriate players. The announcer even says some of the more common ones - it's very cool. The momentum meter simply shows which team is dominating by means of a simple bar graph. It's a neat idea, especially when the crowd suddenly goes wild or hushes, but at times it's way off target. For example, you can be crushing a team 52-7, when suddenly the losing team recovers a fumble. The momentum meter swings to their side. OK, great, they just got a fumble, but it's doubtful they'll come back to win. Shouldn't the momentum remain with the dominant team? Perhaps the idea needed a bit more refinement.

The only other new tidbits worth mentioning are the enhancements made to the dynasty and create-a-school modes. It's now possible to recruit junior college transfers as well as high school players. BCS rankings are present as well. EA also has the rights to the Nokia Sugar Bowl, the Tostitos Fiesta Bowl, and the Orange Bowl. The computer is pretty reliable when it comes to matching up number one and number two - if only the real BCS poll could be so fair. The create-a-school option has more logos and jerseys to choose from as well.

NCAA Football 2001 is not without its flaws. During a multiplayer season, you may occasionally witness some silly aesthetic problems. Occasionally a team plays in the wrong stadium or a different team's name is painted on the end zone. In addition, sometimes players lose their sensibilities and block the wrong guy or get tangled up with their own teammates. These bugs weren't present in previous incarnations of the game, so it's likely the new features have muddied up the works a little. Fortunately, it's not too serious.

Despite the bugs and the lack of any serious innovation, NCAA Football 2001 is still a great game. If you've never experienced NCAA Football and you're in the market for a college football simulation, this bad boy should be your obvious choice. You can't argue with NCAA's great gameplay and artificial intelligence. NCAA Football 2001 does an admirable job of balancing gameplay, AI, and fun in a neat package. Your only decision will be (assuming you own previous versions) whether it's worth to buy the game simply for the updated rosters and new features alone. Or, can you live with last year's game until the PS2 version comes out? Sadly, the rumor is, EA may not release this game on the PS2 in the console's first cycle of releases. This could be your only college football fix for a few years. 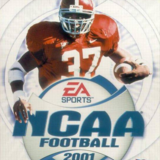