Just as the addition of the Online Dynasty mode will satisfy many, the lack of significant improvements to other key modes of NCAA Football 09 will disappoint many others.

The NCAA Football series has always been in the shadow of its big brother, Madden. But like Eli Manning or Ronde Barber, both of whom have a more-famous sibling, NCAA Football has established its own identity and proven itself to be more than Madden with marching bands. This year's effort benefits from the inclusion of an Online Dynasty mode and the ability to share custom roster files, but other than these two additions, little has changed.

Series fans have long clamored for the ability to play Dynasty mode online, and EA has finally made that dream a reality. Up to 12 players can compete head-to-head online for up to 60 in-game years. Setting up an online dynasty is a breeze. One person acts as the commissioner and sets the rules and difficulty and sends out player invites. Because you're free to play as any Division 1A school and might not otherwise encounter another human opponent, it's good that the commish can alter each team's schedule to ensure that people get to play against one another. You'll want to make sure you play against one another because although you're all recruiting against everyone else, doing so doesn't provide any sense of competition--it's just navigating menus for weeks on end. NCAA 09 seems to do a good job anticipating the problems that typically arise when coordinating a large group online for any length of time. If one player is holding the group back, the commissioner can advance the week or even boot the offending player from the dynasty. You can even throw out results from a game if you suspect something's fishy. If you lose a few people, or just want to add a few new coaches to the mix, you can do so at any time. It would have been nice if you had the option to play a few weeks ahead if you wanted to, but there's very little not to like. It was a long time coming, but it was worth the wait.

It's a good thing Dynasty mode is online this year, because few changes have been made with regard to how it's played. You pick a school, recruit players, and try to lead them to a championship. While you now have the option for the AI to handle a few minor aspects of recruiting and you can quick-call prospects to save a few minutes, the process once again gets tedious after you're about halfway through the season. There simply aren't enough variables to make it interesting. One notable addition is the ability to download custom rosters and use them in Dynasty mode. Some ambitious individual has already made a file available with real player names, so no longer will you have to play with fake player names, nor will you have to spend hours altering individual players.

Another mode that hasn't received a whole lot of attention is Campus Legend, where you create a player, guide him through the final games of his high school career, and help him pick a college where he can pursue his dreams of becoming a legend. You'll still need to attend practice to work your way up the depth chart and boost your attributes by studying for class, going to the gym, reviewing your playbook, or going to the trainer. That may sound interesting on paper, but it involves nothing more than picking an option from a menu and hitting a button. If you've never played Campus Legend before, you'll find that it's a lot of fun for a season or two, but if you've previously spent time with it, you'll be let down that there's nothing new here.

Home-field advantage is a huge part of college football, and it's a huge part of NCAA 09. If you're on the road playing in a hostile environment like Nebraska or Tennessee, you'll have to contend with the crowd as well as the opposition on the field. A rattled quarterback who checks his receivers' routes preplay will see the normally straight lines replaced with a moving, squiggly mess or, worse yet, a question mark over the players' heads. If you manage a few successful drives, you'll take the crowd out of the game (they'll actually leave the stadium in a blowout) and the routes will return to normal. It's a neat way of taking home-field advantage into account without going overboard as is the case with icing the kicker. When the game's on the line, you can now call a time-out to "ice" the kicker. This moves the camera down behind the kicker, which makes it tough to aim and literally puts ice on the kick meter. It's extraordinarily difficult to make even a short kick if you've been iced, which is completely contrary to what happens in real life, where the tactic has a minimal effect on the kicker.

Fast, offensive-minded gameplay has always been a series staple, but this year it's even more wide open. Defenders seem to have been slowed down a bit, so you'll see a lot of long touchdown runs if the ball carrier gets past the first wave of defenders, the secondary simply can't catch up. Huge plays are also common because there are too many broken tackles. Players often slip out of defenders' arms as if they've been coated in oil or bounce off 300-pound linemen like they're made of rubber. The game's breakaway engine is supposed to let you quickly transition from one move to another mid-animation, but most of the aforementioned elusive moves seem to happen on their own without your input. In fact, the breakaway engine doesn't seem to do much at all. You'll still get stuck in long animations and sucked into defenders by some magical, invisible force even if you're madly pressing buttons. Broken tackles are great if you're the person with the ball, but they're particularly frustrating on defense because of how often you'll be victimized by receivers who have an uncanny knack for getting open and who almost never drop the pigskin. Although receivers have no problem getting open, they still have the propensity to catch the ball short of the first-down marker, even though the game touts "smart routes" that let receivers adjust their routes to get first downs.

Despite these problems, the gameplay has been improved over last year and generally plays quite well. Offline co-op play is back after a long absence and allows up to four players to play together on the same system. There are fewer interceptions, but you'll still pay the price when you make an egregiously poor throw. Running the option is as fun as ever, especially since you're not likely to make a poor pitch, even if you're being swarmed by defenders. Many of the on-field changes won't matter to casual players but will be appreciated by long-term fans of the series. You can now audible to a new play while remaining in your original formation so as not to tip off the defense, and you can also display bluff plays when checking your routes before the snap. Defenders aren't without their own weapons, however. You can alter individual assignments or change what your line, linebackers, or secondary will do with just a few button presses. It's great to have this much control over your D, but you'll really have to be quick with the controller to get all of your changes done before the ball is snapped.

NCAA Football received a major presentation overhaul last year, so it's not surprising that 09's presentation isn't vastly different. There are a ton of real stadiums in the game, and as always, they look great. Customization is a large part of how NCAA's presentation stands out from other sports titles--little touches allow you to become completely immersed. You can save photos and replays and display them in your team's shrine, which is filled with trophies you've won over the years. The menus are attractive and easy to navigate, and the newspaper-style articles in Dynasty mode are particularly cool-looking and accurately reflect what's happening around college football. On the field you'll notice a few new player animations, the most notable of which are celebration-related. You can run up to a mascot after a touchdown and interact with him, and some teams have a custom celebration that can be performed with the touch of a button.

The game's audio provides a similar level of freedom thanks to the custom music feature. This lets you take music from your hard drive and assign it to a wide variety of events: sacks, first downs, touchdowns, extra points, kickoffs, and more. Even if you don't take advantage of the ability to import your entire Michael Bolton collection, you'll have plenty of music to listen to courtesy of the game's large number of marching band songs. Lee Corso, Kirk Herbstreit, and Brad Nessler do a solid job of calling the action on the field. Their comments are sometimes disjointed, but the presence of ESPN's number-one broadcast team brings an authentic feel to the game.

Thanks to the long-awaited addition of an online dynasty and downloadable custom rosters, NCAA 09 is an improvement over NCAA 08. However, those are the only noteworthy changes to a game that otherwise has a little too much in common with its predecessor to feel entirely fresh. Playing NCAA Football 09 is like watching your favorite college team blow up a lower division opponent; fun, but not very surprising. 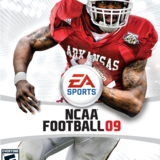