NCAA College Football 2K3 is an all-around solid game, and any college football fan would undoubtedly have a good time with it.

Sega's NCAA College Football 2K3 makes a valiant effort at trying to capture the college football experience, complete with fight songs and a legacy mode in which you can build an entire college program by scouting talent around the country. The game also features the all-new ESPN presentation as well as some solid play-by-play and color commentary. But ultimately, the gameplay has a few minor flaws, and the available modes aren't quite as deep as those found in other college football games that are available on the market.

College Football 2K3 basically offers the same types of modes found in previous installments in the series. For instance, there's a practice option that allows you to pick a team and then run through some of the basic gameplay mechanics. If you want to work on some running skills (such as jukes, stiff-arms, or spins), then you can select the option to run around openly on the field. Likewise, if you want to familiarize yourself with a particular school's playbook, you can run plays without any defense, which is helpful for learning how to run an option play. After you've learned the different facets of the game, you can choose the full scrimmage option and play against a full defense, though you never have to worry about losing possession. The exhibition mode lets you select two teams and jump right into a game. In the game's tournament mode, you can basically create your own brackets. So, for example, you can have an entire tournament featuring only Pac-10 teams. The season option gives you the chance to play through a single college season, in which you can attempt to earn an invitation to a bowl game or earn the prestigious Heisman Trophy for one of your players.

But the real heart of NCAA College Football 2K3 is the legacy mode, which is the equivalent of EA Sports' dynasty mode, but not nearly as deep. In the legacy mode, you select a team and take it through a season. At the end of the season, the game will tell you which players are leaving (either due to graduation or progression into the pros), indicating that you need to fill these positions through recruiting. The recruiting aspect of NCAA 2K3 is really straightforward--you'll get a list of prospective players, along with their position, rating, and the schools they're currently interested in.

Obviously, if you're not one of the schools that a player is currently considering, then you have a much lower chance of successfully recruiting that player. But you can attempt to persuade him by making visits during each of the five recruiting weeks. Similarly, players who are interested in your school can be brought on quickly if you make two or three visits. When you're done with recruiting, you can decide which players you want to keep and which players you want to cut, and from there, you can start the training process, which is interestingly executed. You'll have several different training categories that you can put training points into--the more training points you put into a particular exercise, the more training those specific players will receive. For example, if you want your quarterback and receivers to receive higher ratings, then you can sink all your training points into the passing drill. When you're all done, you can start another season and try to get to another bowl game.

Generally, the modes of play in NCAA 2K3 are pretty basic--in addition to practice, exhibition, and legacy, there's also a create-a-team option that lets you put together your alma mater's team, if it's not in the game's default lineup already. Yet while the selection of modes in NCAA 2K3 doesn't offer the variety of the NCAA 2003 selection, the actual gameplay is still really good. As it is in the actual sport, the passing game can be quite difficult to use effectively in NCAA 2K3. The defensive backs generally do an excellent job of covering the receivers, forcing you to really look hard for an open man, or at least a receiver who has a step on his defender. In addition, the speed of passes really plays a critical role. If you're throwing over the middle to a receiver running a short route, you can try to throw a bullet pass to get the ball to him quickly, but by doing so, you won't put much of an arc on the ball, so a linebacker or a defensive back has a much greater chance of swatting the ball down while it's en route. But you can change the speed and the arc of the pass by simply tapping the pass button, which causes the ball to float through the air. Obviously, you run a greater risk of having the ball intercepted, but since the AI has the tendency to swat down a majority of your bullet passes anyway, it's probably the best approach. It seems unforgiving at times, but you'll start to adjust once you learn to read defenses.

The same applies to the running game. When you begin playing, it might seem as though the defense has the unnatural ability to read all your run plays, but that really isn't the case. NCAA 2K3's running game is highly dependent on your ability to follow blockers, find holes, and, most importantly, improvise. If you see that a hole in the offensive line is being plugged by a linebacker, then you can just as easily change direction, search for another opening, and hope that you can get two or three yards out of it. This is especially important when running an option play, because you have to read the defense to get any sort of substantial gain in yardage. If you see linebackers pursuing the quarterback, then you should pitch it to the tailback, but if it doesn't look like the tailback has a clear path, then you can cut back and try to make a few moves up the field as the quarterback. Of course, you can always just pound the ball up the middle of the line, but the computer will punish you if you continually use those sorts of plays.

As previously mentioned, the AI on both sides of the ball is generally good, but there are a few instances when it seems like there's no one behind the wheel. For instance, in one of our games, the computer opponent had the opportunity to attempt a 10-yard field goal in the final seconds of a quarter, but instead of calling a time out and sending the kicking unit out, the computer simply let the clock run down. Additionally, after a punt, the computer wouldn't down the ball. It simply waited for one of the players on the receiving team to pick it up and then subsequently tackled him. These aren't huge problems, but they show that NCAA 2K3 lacks some refinement.

The GameCube version of NCAA College Football 2K3 looks nearly identical to versions on other platforms, but it's apparent that the game is using an older engine as opposed to the one used for NFL 2K3. The player models look fairly detailed, and some of the player faces look sharp, but there are a few players that have a really generic, almost flat look to their faces. Most of the stadiums in the game are accurate representations of their real-life counterparts, though there appear to be some small details missing, but unless you've actually been to that stadium, you probably won't notice. The GameCube version of the game is also free of some of the slowdown that was in the PlayStation 2 version of the game.

The commentary in NCAA 2K3 is really natural and gives the game a broadcast-quality feel, but like in NCAA 2003, the commentators tend to use lines that are out of place. In addition, they tend to repeat themselves a little too often over the course of a game. The realistic stadium noise is also worth noting. If you're trying to go for the first down on fourth and long, the crowd (if you're the home team) will start to boo. Additionally, you'll hear a few fight songs after scoring a touchdown or at the beginning of a game.

NCAA College Football 2K3 is an all-around solid game, and any college football fan would undoubtedly have a good time with it. The gameplay doesn't have any significant flaws, and the graphics, while obviously using an older engine, are still good, and the commentary adds well to the overall experience. But unfortunately, NCAA 2K3 just doesn't stack up quite as favorably when compared to other college football games that are currently available. 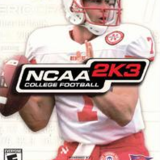 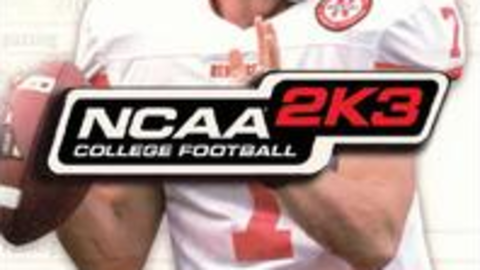 NCAA College Football 2K3 features all 25 official BCS bowls, completely redesigned stadiums, and an enhanced Legacy mode in which you can recruit stars from straight out of high school.