Compared with other basketball titles out this year, ShootOut 98 is at the bottom of the pile.

Sony has impressed basketball fans for the past two years with its ShootOut series, and many thought from the look of things it was going to have the best basketball game on the PlayStation for a third year in a row with ShootOut 98. Unfortunately for fans of the series, including myself, ShootOut 98 no longer has the magic of the first two.

The core features that were in the previous ShootOuts, such as the amazingly fun and intuitive gameplay, beautiful graphics, and realistic NBA action have been compromised. Apparently Sony had to make room on the disc for all of the new play control features and dunking animations because in certain situations, the game slows down. This actually affects gameplay since what was once an unconscious thought of running from point A to point B has to now be factored in with the varying speed of the game. But since it's fairly random and you have no warning or no idea how long it lasts, it's hard to deal with it.

If that's not bad enough, the control seems a little sloppier this year, too. The gameplay is frustratingly bad, rife with rampant shot blocks and steals that seem to happen more often than a shot attempt. I say "attempt" because shooting a basket in ShootOut 98 is a whole lot harder than in any other basketball game I've played - even the computer has trouble. There is one surefire way to make a shot though: the spin button. New to the game is a spin button that allows you to virtually spin through any defender in your path. With that you can get as close to the basket as you want. Once there, ShootOut 98 features more ways to make a basket than any other basketball game on the PlayStation. It has leaners, fadeaways, hooks, tip-ins, alley-oops, and its all-new total-control dunking system, which is just like the direct dunking of NBA Live 98 in that you can select which dunk you want to perform as you go up for the slam. Another new feature that's kind of cool is icon cutting. With this you can direct any of your teammates toward the basket at any time when you're on offense by simply pushing their specific button. On defense you now have a similar feature that allows you to choose the defender that you wish, with the specific button method as well. These new features might sound all well and good, but with the buttons that you have to push to make them work, you'll feel like you're typing rather than playing a game of hoops.

If it weren't for the bad colliding sound effects of the players and the still annoying announcer, I could say that the sound is almost perfect. In some cases the sound effects are the only way to tell what's happening. Of the six camera angles supplied in the game, three are tolerable - the beloved action camera from the first two games just doesn't track the action like it used to. In fact, a couple camera selections immediately switch to the opposite end of the court after a missed free throw leaving you only guessing at what events unfolded underneath the basket.

Compared with other basketball titles out this year, ShootOut 98 is at the bottom of the pile. The problems that plague it make the game downright unplayable. You're better off with any of the other basketball games out there, including last year's ShootOut. 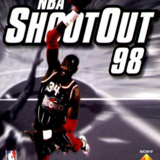