989 has opted to take the easy road this time around, and the result is a basketball game that remains virtually unchanged from last year's version.

Like any console at the end of its run, the PlayStation is beginning to see a plague of rehashes of its sports games. At this point, most development houses seem more than happy to add a feature or two, give the game a roster upgrade, and tweak the AI before shoving it out the door. If only this were the case with NBA ShootOut 2001. 989 has instead opted to take the easy road this time around, and the result is a basketball game that remains virtually unchanged from last year's version.

ShootOut 2001 is somewhat limited in terms of gameplay options. You may play exhibition games, work your way through seasons with full stat tracking, or jump straight to the playoffs in either the simulation or arcade modes. But the all-star game, tournament, and NBA finals options that 989 had hoped to include didn't make it in. In the season mode, awards are given for MVP, rookie of the year, scoring champion, rebounding champion, and defensive player of the year, providing a bit of incentive to rack up the numbers. Customization is one of this series' bright spots, and thankfully all the options from previous versions have again made the cut. You may adjust game length, foul sensitivity, and game difficulty. You may also create your own alter ego in the player creation mode, set his abilities, and then pick him up off the free agent wire. One option that EA has still failed to add to its Live basketball franchise, create a dunk, has returned so that you may design your own interpretation of the throw-down.

On the gameplay front, ShootOut 2001 has its ups and downs. There are over 400 preset plays to choose from, and each team has specific plays designed to take advantage of its strengths. While the plays are run correctly, they rarely achieve the desired effect. You can set your own defensive matchups if a player on your team is getting the screws put to him, and you can also decide how much pressure to apply or whether to double-team. On the court, the controls have been simplified from last year. Now there is one button designated for behind-the-back dribbles, crossovers, and post-ups. The specific moves you are able to perform depend upon the game situation and how close the nearest defensive player is. This can be annoying when looking to drive to the rack with a spin move, as occasionally your player will instead start bucking up against the defender. Keeping some semblance of gameplay depth, the icon passing, cutting, and switching are still included for those who like to refine their game. Unfortunately, while calling them, your player is a sitting duck. Another ShootOut exclusive, the touch shooting, has thankfully returned. It allows you to use a meter for precision shooting instead of relying on the computer's stat crunching.

The AI is a major hindrance to the enjoyment of ShootOut 2001's gameplay. For each of the four difficulty settings, stating that the computer-controlled players are clueless is being optimistic. When the rock goes up, they stand with their hands at their sides waiting for the ball to hit the floor. They rarely jump to get rebounds, and they react so slowly in general that many times you're fooled into thinking it's a dead ball. If the computer does manage to snag one off the glass, it never takes it right back up for the easy bucket. Instead it takes the ball back out to the perimeter to reset the play. Many times players seem to randomly wander around with no purpose, only springing to life after receiving the ball. The computer also fails to take advantage of double teams, and when it's wide open for a jump shot, it will often drive into traffic for a dunk.

The visuals 989 pumps out of the PlayStation for ShootOut 2001 are impressive. The player models are accurately proportioned, the arenas are meticulously rendered, and there is a nice clarity throughout. The player faces are fairly representative of their NBA counterparts, and close-ups do not reveal mutantlike features as in Live 2001. The animations for dribbling and shooting are fairly believable, but the dunk animations lack the semblance of force that they should have. The camera system also lacks refinement. Many times you will be going for a rebound, only to have the camera switch at the wrong time - causing you to misjudge the ball.

The play-by-play in ShootOut 2001 gets the job done, but it lags behind at certain points. The crowd reacts accurately to the action on the court, and the organ music and jock rock tracks seem to kick in just when the crowd is in a funk. If any of the sound options become too annoying, they may be adjusted or taken out altogether.

While NBA ShootOut 2001 has Live 2001 whipped in the graphics department, after a few weeks with a sports game it's the gameplay that counts. This is where ShootOut 2001 falls flat. The seemingly random ball physics, coupled with the awful AI, make ShootOut 2001 fun at first, but frustrating later on down the road. It doesn't help that 989 failed to include even one new gameplay option. ShootOut 2001 has the foundation to be an excellent basketball game, but the small details that make the truly great sports games more enjoyable over time are missing. 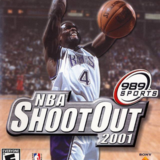 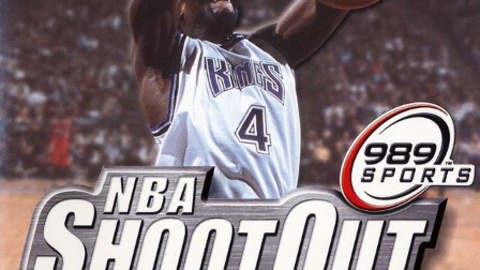 The gameplay system in NBA ShootOut 2001 generally coaxes the player into fast-break basketball.