A shoot and a miss.

NBA Playgrounds attempts to fill the void left by beloved series like NBA Jam and NBA Street. And while it can be a fun, flashy arcade game, it quickly succumbs to its own repetitive gameplay and presentation--with frustrating results.

Playgrounds has only one game mode in both single-player and online multiplayer: two-on-two. Aside from an Exhibition mode used for practice, the bulk of your time in Playgrounds is spent competing in tournaments around the world on one of six courts, styled after real-world cities such as New York and Shanghai. You have to play through three-minute games before your team is able to compete in the five-minute championship, which unlocks new courts and player-card packs that grant you a new selection of the game's 150-plus real players from the NBA's 30 teams.

Playgrounds is quick and fun--in the short term. A lot of the game's offense and defense comes down to timing. Once you get that down, it adds a fun sense of rhythm to the game--knowing when to release a shot, the best time to try for a steal, or when to attempt an alley-oop. But a lack of AI responsiveness disrupts that rhythm. Computer-controlled teammates won't always react when you direct them to set a pick or initiate an alley-oop, which can lead to the shot clock expiring or an easy steal for your opponent. You eventually learn that you can only consistently rely on your AI teammate to shepherd the ball while you look for open space on the court.

Despite the fact that your partner is often unreliable, the moments when the AI behaves according to plan can lead to impressive displays of teamwork. You’re rewarded for flashy play during games by pulling off alley-oops, fancy dunks, and stealing the ball from opponents. These moves fill up your team's special meter, which, when full, pays out a random "lottery pick." One such lottery pick guarantees a player's shot will go in from any distance after passing the half-court line, or even if it’s being blocked by the opposing team. Another one awards two extra points for dunks, helping to transform a close game into a four-point lead at the drop of a hat.

The hope of getting a lottery pick, as well as the fear of having one used against you, keeps games tense. You may find yourself pumping your fists in excitement one moment, then throwing your controller when an opponent gets a lucky opportunity the next. The give and take of this system's rewards and punishments are immediately apparent and encourage improvement in your overall strategy.

There's a definite feeling of accomplishment in the process of getting better at Playgrounds. Finding a break to make a three-pointer, disregarding traditional rules to shove an opponent away from the ball when they're most vulnerable, or capitalizing on a fleeting opportunity for a flashy dunk all feel great, and smart plays are often rewarded with expressive, hype-inducing animations.

Despite the fact that each character has his own stats, they rarely feel distinct from each other during a game.

Special mention has to be given to Playgrounds' dunks. They're impressively choreographed--your player may do flips, spins, or even knock opponents down in midair, all before nearly ripping the rim from the backboard. Conversely, it’s maddening to watch your opponent do the same when your defensive lapses lead to a creative display of dominance on the court, but in a way that inspires you to consistently do better, rather than to quit.

One of Playgrounds' main draws is no doubt its goofy aesthetic, which is a direct homage to NBA Jam. Unlocking new characters is enjoyable in that you're treated to detailed-yet-stylized takes on real-world players. But despite the fact that each character has his own stats, they rarely feel distinct from each other during a game. You can easily get by using the initial roster, and once you settle on a pair of go-to players, subsequent recruits ultimately feel like trophies on a shelf--awarded for playing well, rather than new tools.

Variety ends with the game's visuals, though. There isn't much else to do other than playing through a tournament. In Exhibition, you have some added options, like the color of the ball or how long a game lasts, but in tournaments, you play the same four rounds over and over across the game's six levels. Getting stuck on a particularly hard final round can be immensely frustrating, given the lack of an alternative mode or palate cleanser. This monotony is exacerbated by the game's two announcers--Ian Eagle and EJ Johnson--who repeat the same corny jokes each game.

Playgrounds' online offering is also plagued by this lack of content, also launching with only one game mode. But playing against an actual person does help alleviate some of the game's repetition. Online games tend to be far goofier and more sporadic, with two players competing not just to win, but to do so in style. Reckless performances in the name of fun gives Playgrounds' multiplayer games a level of slapstick enjoyment not found in single-player.

Even if Playgrounds' single-player mode lacks the unbridled merriment that makes multiplayer so enjoyable, finally getting the upper hand in a tournament is rewarding and exciting in its own way. But even at its best, Playgrounds doesn't offer enough variety to keep you engaged for long. Playing the same game type over and over, with only levels and opponent names changing, quickly gets old, no matter how good they feel in the moment. Even one additional game type at launch might've made the overall package more enjoyable, but as of right now, it might be best to wait for Saber to patch in some variety. 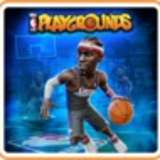 Blake Hester is a longtime NBA Jam fan that was excited to see if Playgrounds could recapture a similar arcade feel. For his review, he played over 30 matches online and off, scored over 600 points, and unlocked 62 players from the game's roster. He also played the game on mute. GameSpot was provided with complimentary copies of the game for review.