NBA Live 98 is an improvement over Live 97 in almost every category.

NBA Live 98 is an improvement over Live 97 in almost every category - with graphics and sound being the most predominant - from the electrifying full motion video intro to the incredible motion capture technology that gives the players their lifelike movement on the court. Overall, NBA Live 98 looks polished - from its interface to the play on the court. The only problem graphically that has somewhat plagued the entire series is that the games aren't as smooth as Sony's Shoot Out 97 or Konami's In the Zone 97. The problem is minor, however, given the extreme level of detail given to each individual player. All of the virtual players on the court have the real NBA players' faces modeled on them. So each and every one of the players looks like the real thing.

NBA Live 98 is filled with a ton of new options and fixes for the old. One of the most notable options that fans of the series will notice is the create-a-player option, similar to before, but this time you can create an entire team as well. Gameplay options include icon passing that allows you to pass the ball to any player at anytime, and direct dunking, a new feature that allows you to actually choose the dunk you want to perform. These give the game a level of control that was sorely needed.

As far as game modes go, Live 98 features exhibition games, season mode, playoffs, and a new three-point shootout mode. The three-point shootout is superfun and allows you to go head-to-head. In the exhibition mode you will experience the usual knockdown - there's no such thing as a foul or out of bound - arcade style of play. In season mode, you can play a 28, 56, or full 82-game season, delivering a more true-to-life experience. You are allowed to choose from tons of offensive and defensive plays that can be implemented on the fly; although, as with most basketball games, defensive play is still a bit of an issue. The steal button seems to get you a foul more often than it gets you the ball.

The sound is noticeably good. It features some of the best sneaker squeaks and basketball bounce samples in a basketball game. The play-by-play announcing (done by TNT's Verne Lundquist) is also some of the best in the basketball business. It tends to be slightly less annoying than the NBA Shootout voice work.

In the end, NBA Live 98 has more of what players liked about the previous NBA Live titles and less of what they didn't. NBA live 98 is truly the first 32-bit Live that will make die-hard fans of the 16-bit versions happy. 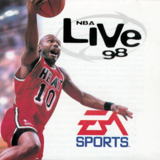