NBA Live 2003 should provide a great experience for any basketball fan.

The 16-bit iterations of the NBA Live series are widely regarded as some of the most entertaining five-on-five basketball games to date because of the fast-paced gameplay and relatively smooth passing mechanics. EA Sports has tried to re-create the same mechanics for the 2003 edition of NBA Live and has largely been successful in doing so. NBA Live 2003 for the Xbox focuses on the up-tempo aspects of the sport of basketball as opposed to the half-court set, and the result is plenty of fast breaks, quick passes, and few shot clock violations. There's even a new control scheme, called freestyle, that enhances these elements, making NBA Live 2003 one of the most enjoyable basketball games to be released this year.

At the end of a season, the game will hand out awards such as League MVP, Sixth Man, Rookie of the Year, and Defensive Player of the Year. The game will also name its All-NBA team, All-Defensive team, and All-Rookie team. While the off-season may be celebration time for some teams, for others, it marks one of the few opportunities to make significant changes. First, you'll see a list of retiring players, so you'll know what holes, if any, you will need to fill via the draft, free agency, or trades. You'll also have to take care of re-signing players if any of them are coming to the end of their contracts and you want to keep them on the team for a few more years. Unfortunately, when you make it to the rookie draft, there really doesn't seem to be enough information to make an educated choice. After completing the draft, you can sign any remaining free agents, make last-minute trades, and then begin a new season. Again, it's not quite as in-depth as NBA 2K3's franchise mode, but it also won't be as intimidating for some, and it seems to fit well with the new gameplay style. The other modes in NBA Live 2003 aren't nearly as involved as the franchise mode. the game features straightforward exhibition, season, and playoff modes, as well as a practice mode that lets you move around the court with a single player. Live 2003 also features a one-on-one mode in which you can select any two players in the league and pit them against each other to see who's better.

Instead of just going for the basic one-button juke move--or any sort of button-activated juke moves, for that matter--Live 2003 gives you control over ball movement via the right analog stick on the Xbox controller. If you want to dribble in between your legs behind the three-point line, you simply lightly tap the right analog stick from left to right. Likewise, if you want to perform a sharp crossover when driving up the court, press lightly in one direction on the analog stick then quickly press it back in the opposite direction. This system makes it feel as though you have more control over the player, since the guesswork of context-sensitive juke moves has essentially been removed. Plus, you can create some really spectacular-looking plays that will actually be worth looking at in replays over and over. However, you can be penalized for using these moves, especially when executing them in a crowd of defenders, which often results in a steal. In addition, the freestyle ability really makes the better point guards in the league overpowered, and you'll probably find yourself relying on them more than any other player. Though, since it's obvious this game wasn't meant to play like a true simulation, it's really not that big of a problem.

The post-up game still comes in handy when going up against irritating zone defenses, but generally, it really seems to be useful only as a "last resort" strategy, which is unfortunate. The post-up game in Live 2003 is quite fun to use, as it lets you back down a defender until he starts to hold his ground and then either put up a jump shot or roll off and drive to the basket. It functions similarly to the system in NBA 2K3, only everything happens much faster. You might think it would be difficult to play defense in a game in which all the players are so quick, but it really isn't. As long as you stay up on an opposing player, or generally stay in his way, cutting off lanes to the basket, you'll be fine. Likewise, defending a man down on the block is equally straightforward as long as you play right up on his back. Shots can frequently be blocked, but doing so usually sends the ball flying out of bounds. Steals are also relatively frequent, since playing the passing lanes usually results in a turnover. So, the defense has been adequately equipped to handle the high-speed offense in the game.

Though the Xbox version of NBA Live 2003 looks the cleanest of the three versions available, there weren't any significant visual enhancements made to the Xbox version of the game. The player models look detailed, and you'll notice some of their identifying characteristics such as tattoos or headbands, but for the most part, many of the character models look a little too generic and don't quite have the facial detail of those found in other NBA games. The animation in NBA Live 2003 is excellent, and just about every move, from the freestyle motions to layups and dunks, is animated incredibly well. There are also some really nice, and useful, secondary animations such as when a player leaps out of bounds to catch the ball, only to throw it through his legs and back inbounds.

NBA Live 2003 will definitely appeal to the more casual basketball fan, simply because of the faster pace, but Live still carries enough simulation elements, which you'll see when you increase the difficulty, to prevent it from being a complete arcade-style basketball game. Ultimately, it comes down to preference, but NBA Live 2003 should provide a great experience for any basketball fan. 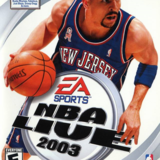 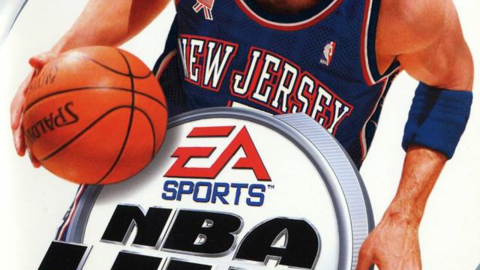