Fans of previous versions of Live will have a good time.

Like clockwork, EA Sports has brought the magic of the NBA Live series to the PlayStation for another year. Like any good sports series, a slew of new touches has been added, the most notable of which is the inclusion of Michael Jordan in the game's lineup. Yes, along with all the actual players, teams, and arenas of the NBA, the game also includes all-star teams composed of players from the last five decades, letting you play as some of the greatest players ever to set foot on the court.

While the game includes several modes of play, such as an arcade mode with exaggerated dunks and flaming basketballs, a three-point shootout, and a one-on-one street-ball mode, the game's main focus is still happily on season mode and actual NBA basketball with actual NBA rules.

NBA Live 2000's easy-to-use control scheme lets you jump right in and start taking the ball to the hoop. Once you've got the basics down, you can start experimenting with the game's more-advanced control scheme, which not only lets you pull off more maneuvers on the court, but also lets you set up offensive and defensive formations.

The computer AI ranges from easy to hard (unless you're playing the one-on-one mode against Jordan, who always seems difficult to beat), depending on what difficulty setting you have the game set on. The computer teams set up plays and run them at the appropriate time. For instance, you'll see the computer kill the clock in the closing seconds of a game if it has the advantage, forcing you to put on a little full-court press.

Visually, the game looks quite nice. The players are good representations of their real-life counterparts. Their animation and moves are smooth and look quite natural. The game features multiple camera angles and zoom settings, letting you see the action from just about anywhere you like. The game also features an instant replay that shows dramatic points in a game, like big dunks. During the replays you can catch a glimpse of the players up close and actually see the expressions on their faces change.

In the audio department, NBA Live 2000 does a decent job of re-creating the sounds of the NBA experience. The game's sneaker squeaks, dribbling, and various other sound effects are accurate. The play-by-play calls along with the roar of the crowd really draws you into the game. One nice audio touch happens when you use created players. If you enter a last name for your created player, and that name is the same as that of one of the players from the NBA, such as Anderson or Miller, the game will recognize it, and the announcer will call out the name during play.

In the end, NBA Live 2000 is a good basketball game for the PlayStation. While it doesn't offer anything spectacular in graphics, control, or any one category, the game's overall feel and look is quite good. Fans of the NBA Live series will undoubtedly see it as the best iteration of the series yet for the PlayStation. The extras - like the arcade mode, one-on-one, and three-point contest - are nice and add to the game's value. Fans of previous versions of Live will have a good time. 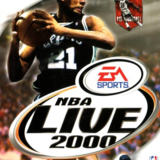