Fun until it's not.

With tight controls, a more engaging career mode, numerous reasons to invest in your character, and fine attention to detail, NBA Live 19 is a surprisingly big drive forward in many aspects for EA's pro basketball franchise. However, its numerous animation and AI issues and lack of significant updates to Franchise mode make the newest entry ultimately feel like only an iterative update on last year's game.

Basketball is a fast and fluid game, and NBA Live 19 excels in replicating this on the court. The game uses the Real Player Motion technology that EA implemented in Madden NFL 19, and this helps make player movement and animations look better and more realistic. There are a number of impressive details that NBA Live 19 replicates authentically, including the transition from jog to run to sprint, how bodies collide when you drive the lane, and the way a player falls to the ground in embarrassment when they get their ankles broken by a well-timed crossover. Players jockeying for position in the post or making a quick cut to get free for a shot look better than ever, while defenders closely guarding an opponent with their hands replicate the kinds of motions you'd see on TV. What's more, player-specific moves, like Steph Curry's step-back jumpshot and Joel Embiid's windmill dunk are all brought into the game with a fine attention to detail. The player models are for the most part more realistic-looking.

The animations have their ugly side, though. Bounce-passes almost never look right, with the ball zipping to the recipient at an inhumanly fast pace and sometimes at impossible angles. During some free throw animations, the player may grip the ball in a way that science says would prevent them from releasing it cleanly or at all. There are also odd sequences related to AI logic. AI players can make strange decisions like fouling on threes consistently and making obviously errant and silly passes. There were also times when AI players would stand in the paint and get called for three-second violations as if they didn't know it would get whistled. These abnormalities are unfortunately common, and take you out of the game.

On the brighter side, NBA Live 19 impressively captures the atmosphere of professional games and basketball culture in general. In professional games, the crowd noise soars when you make a big shot; shoes squeak as players enter scramble for position; players slam into the stanchion after a big play; and you hear the announcer talking about everyone getting free pizza or tacos if the home team scores X number of points. It's impressively close to what you'd see on an NBA broadcast. Street games also faithfully capture a very different subset of basketball culture. There is something special about playing outdoors, and NBA Live nails the presentation of its blacktop courts and atmosphere of fans crowded around the edges trying to get a glimpse. One of the nice new tweaks is that the camera cuts to a cell phone video of someone in the crowd livestreaming the game after big plays. These changes and improvements contribute to an impressive presentation package that pulls you in.

The controls in NBA Live 19 are relatively simple but contain enough depth to give you ample opportunity to play with your own style. Moving the ball around to create scoring lanes is a fine way to play, but there's room to emphasize more stylish and exciting moves. Ankle-breaking crossovers, behind-the-back dribbles, step-backs, and spin moves can all be performed with the flick of a stick in the right direction at the right time. It's also nice that the game recognizes when you're in the paint or when a hole opens up, and it guides you toward making the right play under the circumstances at hand. In past games, you might have pulled up for a jumper two feet away from the rack, but now the game better understands where you are in the key and turns it into a layup or dunk. Executing a play requires strategy and timing, and it all feels fluid as your teammates will, for the most part, make smart cuts to get free. It's up to you to recognize those cuts and runs and make a pass at the right time. NBA Live 19's on-the-court gameplay is the best it has ever been.

NBA Live 19's broadcast presentation is one of its strongest components. The game continues to use the ESPN license, which brings the big-time sports network's graphics, trademark music, and commentator Jalen Rose to the game for halftime highlights and breakdowns in a further bid for realism that enhances the experience. What's more, EA brought in a new commentary team for NBA Live 19 composed of Ed Cohen, who does play-by-play for the New York Knicks in real life, and former Chicago Bulls player Jay Williams. They have a natural-sounding and mostly pleasing back-and-forth, with Cohen making precise comments about statistics, positions, and schemes in his play-by-play role and Williams on color making quips that draw from his years of playing experience. The commentary eventually grows stale, sadly, and this is particularly apparent when playing in Franchise mode where you stick with the same players all the time. Did you know that Boston Celtics center Aron Baynes grew up in Australia playing rugby, and that contributes to the physical nature of his play style? You will, as Williams repeats this line again and again. As it does with the Madden series, EA plans to update NBA Live 19's commentary throughout the season to keep things fresh, and that's fortunate because new and different lines are what the game needs.

One of the most substantial and noteworthy additions to last year's game was the career mode, The One, where you create an amateur player and build them into a superstar. It returns in NBA Live 19 and genuinely feels like it has improved with a globe-trotting story, a deep new mode called Court Battles and the ability to create your own court.

Your journey in The One takes you to notable real-world street courts like Tenement Square in the Philippines, Cherashore Playground in Philadelphia, Quai 54 in Paris, and Parque De Rio in Brazil. The diversity of courts and their related aesthetics--like the Eiffel Tower in the background and colourful structures in Brazil--give you the sense that you're going on a journey as you try to become, well, the one. There are also some fun narrative choices you can make with your mentor and agents, including playful banter about your performance on the court as well as more substantial decisions, like where you want to compete next. This kind of control helps you feel more connected to the player you create and more attached to their journey.

Progression in The One is akin to an RPG where you'll spend skill to increase attributes like passing, rebounding, dribbling, and shooting. In the early stages, you'll notice deficiencies in your player; they might lack dribbling skills to blow by a defender with a finesse move or be unable to catch-and-shoot as fast and effectively as a more accomplished player could. Toughing it out and cutting your teeth in early games, then eventually upgrading your skills to become a more well-rounded player, makes The One's progression system feel rewarding. On the customization side, the character creator finally lets you make a female character, which was a notable absence from last year.

Winning tournaments in The One lets you recruit NBA and WNBA players to your team, and it's a wonderful fantasy fulfillment for basketball fans to build a team of players that can be comprised of any professional player. Another noteworthy element is The League, which sees you taking your created character through the NBA Combine to Draft Day and eventually to the NBA where you can play a full season as your fantasy character on any team you want, and it's exciting to play as your created character alongside NBA superstars.

One of NBA Live 19's deepest modes is the card-collecting Ultimate Team, which fans of EA Sports games will know well. There are a mountain of fantasy challenges available right at the start--more than one thousand in all. had fun earning new players and completing the challenges, but the overall experience feels very grindy. To build your team you can slog away at these challenges or pay real money for "NBA Points" to buy new players that you can use immediately. The Store page where you can buy NBA Points is front and center in the Ultimate Team menus, and this feels like an unnecessary and gross, if unsurprising, push towards microtransactions.

Franchise mode sees some noteworthy new updates, including a pre-draft preview, while the introduction of "Bird Rights" expands and improves on last year's shallow contract negotiation options. However, with no player editor or online functionality, Franchise remains a barebones experience that comes nowhere close to what EA's other sports games offer.

NBA Live 19 also offers numerous online modes including the standard head-to-head matches and deeper, more interesting ones such as Live Run and Live Events. In these, you team up with other players online to take on co-op challenges like winning street court games in 3v3 and 5v5 setups. In addition to acquiring more progression points for your character, you can earn customization items for yourself and your court by completing these challenges. Part of what I like so much about playing basketball in real life is the community aspect of playing together with friends--or strangers--on a court down the street. NBA Live 19 captures that feeling and delivers a rewarding experience for engaging in it.

NBA Live 19 is a capable and competent basketball game that offers a multitude of different ways to play and numerous reasons to keep coming back. Its impressive attention to detail complements the strong foundation set by its presentation and gameplay. However, the AI logic and animation problems are impossible to ignore given they're at the heart of the experience the entire game is based on. These issues, combined with a lackluster franchise mode and a push towards microtransactions, detract from what is an otherwise solid basketball game.

View Comments (15)
Back To Top
7
Good
About GameSpot Reviews 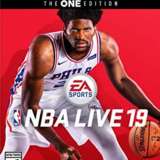 Eddie played around 20 hours of NBA Live 19, including a Franchise season with the Celtics. He played on Xbox One X using a code provided by the publisher.