NBA Hoopz for the Dreamcast is the same old song and dance that Midway has been perpetuating for years now.

A console's software library is never complete without a heaping helping of Midway's over-the-top sports games. From NBA Jam to NFL Blitz, Midway has the majority of the most popular exaggerated sports franchises in its stable. The NBA Jam series has undergone a slew of name changes over the years, while the basic formula has remained virtually the same. But this hasn't stopped Midway from changing the name yet again, this time from NBA Showtime to NBA Hoopz, and from throwing in a few new modes and getting the game to market once again.

Midway has no shame in its game. It has added just enough improvements to the NBA Jam series each year to keep longtime fans from crying foul, yet it has kept the exciting last-shot-wins gameplay and has thus kept new customers hooked. The latest version of the franchise is NBA Hoopz for the Dreamcast. In contrast with previous releases, Hoopz has more than the usual lot of improvements. The most glaring change from past installments is the addition of another player. Instead of the two-on-two antics prevalent in every other version of NBA Jam, Hoopz adds an extra player to the proceedings. The extra player comes in handy when you try to get an open shot or when you attempt to perform alley-oops and double dunks. The only drawbacks occur when you play with three friends. The dim-witted computer sometimes controls the third player on each team, and this can result in some frustrating moments. Other new additions to the franchise include a multitude of minigames and added control options, like the hoopz button, which allow you to perform special dribbles and shots.

The basic core of the gameplay has remained the same, however. You can shoot a windmill flip dunk during nearly every one of your trips down the court, and after you make three straight shots, you catch fire. If you perform three consecutive alley-oops or double dunks, your entire team is set ablaze, and the game quickly spirals into a rout. There are fouls in NBA Hoopz, but even if one is called, the fouling team may still take possession of the ball. After several fouls are called, a trip to the charity stripe is in order. Even so, the punishment fails to fit the crime, so the games quickly turn into shoving matches to determine if the last man standing can pick up the ball. The controls are fairly simple with just four buttons to master, and the new hoopz button lets you post up and perform special moves, such as skyhooks and underhanded shots. Shaq, the game's spokesperson, has several moves that only he can perform; overall, he's an unstoppable force in the game. Unfortunately, the same computer AI has returned, which means that anyone can win with a shot at the buzzer. It's a nice feature when you're playing against inferior competition, but when you're in a heated play session with friends, it provides far too many excuses for the losing team.

All the expected gameplay modes are present, including seasons, exhibition for up to four players, and tournaments for eight teams. The extra modes in the Dreamcast version of NBA Hoopz are dull when you play against the computer--but as with the other gameplay modes in NBA Hoopz, the real excitement comes when you play against friends. You have a choice of a three-point shootout, 21, around the world, or 2ball to keep you busy. If you aren't happy with all the real stars of the NBA, you can create your own player. You begin with a real NBA character model, and then you can alter his height, weight, and facial features to achieve the desired appearance. Then you set the attributes from a set number of points. You are awarded with new attribute points for winning games with your created player or by answering trivia questions between quarters. It's a nice feature that gives you the incentive to keep playing--plus, it builds an unstoppable on-court force. The one glaring omission is the lack of network play. Considering few third-party developers take advantage of the Dreamcast's 56K modem, it's really not a surprise.

NBA Hoopz is a quick-moving game, and the Dreamcast hardware does a good job of keeping up with the action. The frame rates take a tumble occasionally when a player is on fire, but this problem has been cleaned up considerably, especially when you compare it to the previous builds we received. The character models are blocky, and the facial textures make all the players look angry. While the camera is panned out, things look fine, but close-ups tend to solicit a chuckle or two. Slow-motion replays are triggered after particularly impressive plays, but they grow tiresome rather quickly and can't be skipped through. Midway has taken the time to motion-capture 500 new moves for Hoopz, and they aid in establishing some sense of legitimacy despite the unbelievable actions of the players. Shaq has his own repertoire of big-man moves, which can be accessed with the hoopz button and his own celebration animations as well. Hoopz's graphics don't even compare to those in NBA 2K1, but the lack of detail lets the game move at a nice clip, which is paramount in a game of this nature.

NBA Hoopz for the Dreamcast is the same old song and dance that Midway has been perpetuating for years now. While it's undoubtedly the closest that the series has come to an arcade-perfect console version of NBA Jam, the tired gameplay and the irritatingly cheap computer AI keep Hoopz from being a must-buy. If you haven't had enough of flaming basketball insanity already, Hoopz is a fine addition to your Dreamcast software library. The addictive and fun head-to-head gameplay takes some time to wear out its welcome, and the new options included in the game will pacify NBA Jam veterans enough to warrant a rental. 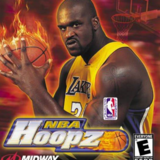