NBA 2K9's game is strong, but most of its new features won't be appreciated by the average Joe.

Let's start with what's new...or kind of new. Living rosters are frequent updates you can download throughout the season to make sure your rosters are up to date. All decisions on rosters and ratings are made by a single person known as the 2K Insider. At the time of this review only one roster update had been released, and it consisted solely of roster moves. But if things go as planned, roster moves are just one way living rosters will affect the game. If a player is on a hot streak, for instance, the Insider will bump up his ratings accordingly until he cools off; if a rookie turns out to be a ridiculous dunker, the living rosters will be updated to reflect his prowess. Nobody's ever going to say that up-to-date rosters aren't a good thing, but as far as being touted as the game's biggest feature, living rosters are underwhelming.

This year's gameplay remains top-notch. It's uncanny how closely the video game mirrors the real NBA at times. Players will fight through screens, dive for loose balls, come flying out of nowhere to tip in a rebound, and show emotion after a big play. Provided you're not moving around too much, your teammates will move around and do a decent job of making themselves open. However, if you're dribbling quickly around the court, your players tend to stand and watch. If your teammates aren’t running the floor properly, you can call out a specific play with just a few button presses. You'll want to call plays to get your teammates involved, because it's tough to score on your own and the defense adapts quickly to cheesy tactics such as going to the rim and passing in midair. In fact, the AI is quite adept at recognizing patterns and shutting them down. You might not notice this when playing lousy teams such as the Heat or the Thunder, but it's very apparent when you're playing a team like the Celtics.

Casual players may have difficulty figuring out how the gameplay has changed since last year. There are, in fact, a number of improvements, though their effect on gameplay is generally modest. Fewer shots are taken from behind the backboard, and you're less likely to step out of bounds, too. Missed layups, while still a bit of an issue, occur significantly less often than before. It would be nice if taller players exercised more authority down low and dunked rather than putting up two-foot bank shots, but at least they don't miss too many gimme shots this year. Lock-on D was overpowered in 2K8--Shaq could guard Chris Paul with ease--and that's not the case in 2K9. Locking on to a defender and then sticking to him with the right analog stick is effective without being cheap.

While improved, 2K9's gameplay still could have been better. The controls are overly complicated and the manual doesn't provide enough guidance. It's better than last year's, but when the instruction manual refers you to a more detailed online manual (which is currently only available for the Xbox 360), it's safe to say the controls have gotten a bit too complex. Passes often don't go to the highlighted player, so using icon passing is a must if you want to reduce turnovers. Manually snagging rebounds is inconsistent as well, even if you've clearly established position. Free throws--a problem for years now--are still too difficult to make thanks to the different timing of each player's unique shooting animation. The AI is generally quite good on defense, but it's a different story on offense, especially at the end of the game. CPU-controlled teams that are losing will often stand around and dribble precious time away at the end of the game, but when they're winning they'll sometimes take quick shots rather than running the clock out. Your teammates typically do a solid job without your interference, but it can be frustrating when they fail to rotate on defense or when you call a pick-and-roll only to have them pick and forget to roll.

Once again, there are a boatload of game modes. And once again, the menus are poorly designed (though they are new). Association mode, where you take the reins of an NBA franchise, is back and has seen a few improvements, especially with trades and contracts. No longer are you given a visual indication of whether or not a team or player is pleased with your offer before you make it; you're only told whether or not it's a valid offer with regard to the salary cap. The "Larry Bird" rule as well as three-team trades have also been implemented--though it's incredibly difficult to pull off a three-team deal. Blacktop mode is back and mostly unchanged, although the dunk contest is a bit easier--and, therefore, better--this time around. You can still create your own highlight reels with the game's intuitive video editor and share them online, which is a pretty cool feature. The biggest addition to the already robust online play is the ability to play five-on-five with as few as one person per console. There's no player progression, but it's a step in the right direction--or at least it would be if not for the crippling lag and camera angles that made it difficult to follow the action that plagued each and every game. Two curious omissions may upset series veterans: There's no baseline 2K cam option online, and online lobbies have been eliminated. However, given the leagues, the ability to share rosters, and the tons of other options, you couldn't ask for much more from NBA 2K9's online capabilities.

Signature player shots and outstanding animation are series staples, but it's the little things 2K9 does that make its presentation better than ever. The arenas look amazing thanks to raucous crowds, packed sidelines, mascots, coaches, and ball boys. On their own these things may seem insignificant, but as a whole they do a great job of replicating the atmosphere of a real NBA game. In fact, from the default gameplay camera view, there aren't a whole lot of faults to notice--it looks like you're watching a live game. Only during replays and free throws do the few visual flaws--a choppy frame rate and player models that are starting to look a bit dated--become apparent. Neither of these affects the gameplay, but the inconsistent frame rate does make it difficult to enjoy the otherwise impressive replays when the announcers (accurately) break down the game between quarters. Two things that do affect gameplay, however, are the Gatorade logos at the beginning of the half and the play-calling menus. Both obscure a large portion of the screen, often making it impossible to see the ball handler. This is inexcusable.

2K9 sounds as good as ever. The crowds are loud, the PA announcer is solid, and like in a real NBA game there's plenty of music in the background. Kevin Harlan returns, and he's joined by two new personalities: Cheryl Miller, who reports from the sidelines, and Clark Kellogg, who helps call the action. Their play-by-play and commentary is generally spot-on, though they tend to repeat themselves, sometimes on the same possession.

It's disappointing that there aren't more noteworthy additions to this year's game. Living rosters and five-on-five play are nice, but their appeal is limited. That said, there's very little not to like about NBA 2K9. Player animations are outstanding, Association mode is deep, online options are plentiful, and the gameplay is terrific. If you're a baller, this is the game for you. 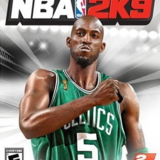