Mobile versions of console or PC titles used to carry the stigma of being poor cousins, but as games like Fortnite and Genshin Impact have shown, it's possible for mobile games to be just as good as their console counterparts. At first glance, NBA 2K21 Arcade Edition seems like it will follow suit; the game looks very impressive, the action runs smoothly, and every NBA team (with full rosters) is available from the start. I thought I'd have all I need to enjoy some great NBA action wherever I went, but the more I played the more I realized what I thought would be a deep experience was instead very shallow.

NBA 2K21 Arcade is the annual basketball franchise's first appearance in Apple Arcade, and it features three main modes: Play Now, MyCareer, and Black Top. The game does a great job of bringing the impressive visuals of the NBA 2K games to iOS, with player models here looking pretty close to their real-life counterparts.

The Play Now feature is straightforward: pick two teams and play a game. The short amount of time it takes from booting the game up to playing a game is impressive, only lasting as long as it takes you to pick teams. But actually playing a game is where things get tricky, with the game's on-screen touch controls being too sensitive at best and non-functional at worst.

Moving a player uses a virtual stick on the left of the screen, but this same stick also controls your player's speed--a slight push will result in a jog, but extending the stick all the way in one direction will make your player run. In the console versions of this game, running requires an extra button press--this means that in this mobile version, you always run the risk of accidentally gassing your players within a single quarter if you're not paying attention. Avoiding the run function is difficult too, as it cannot be turned off, and the difference between jogging and running is very slight on a touch screen. Fatigue can be turned off, which keeps your players from being too tired, but it still doesn't fix the "run vs. sprint" issue.

These problems are even more apparent on defense, as trying to track your assigned player to guard becomes an exercise in frustration. The constant struggle in trying to avoid sprinting means your player will erratically move around the court, giving the opponent an easy lane to the basket. Clunky and awkward are not words you want to hear about something as basic as "moving down the court in a basketball game," yet that's the case on both sides of the ball in NBA 2K21 Arcade.

Ball controls are similarly imprecise, but passing and shooting at least benefit from being mapped to specific buttons. You can also shoot using a separate virtual stick on the right of the screen, but like the movement stick, it's very touchy and doesn't always operate the way it should. This leads to many frustrating moments, such as when a player crashes the basket and stops in his tracks, doing nothing instead of shooting the ball. These control issues are alleviated by connecting a Bluetooth controller to your mobile device (if you have one available). The PS5 DualSense controller I connected to my iPhone immediately made this mobile version of 2K feel more like the console version, with players running smoothly and buttons working as they should. There is an obvious problem despite this, however; it defeats the purpose of being a "mobile game." Carrying a bulky controller around with my phone takes all the novelty out of the mobile gaming experience, and if a controller is the best way to play a mobile game then that's a big issue.

Out of the three game modes NBA 2K21 offers, Black Top impresses the most with its streetball, first-to-21 approach. The camera angle in Black Top shifts from a static camera showing the action from left to right to a behind-the-back angle, switching sides so the team with the ball always has its back to the camera. This small change makes a big difference in how the game is played, giving you better vision across the court when approaching the basket. The first-to-21 point structure works great too, adding a schoolyard tension to NBA 2K21 that is refreshing and fun.

MyCareer, conversely, is the most disappointing of the three modes as it barely emulates the MyCareer experience found on consoles. The mobile version lets you create a character, play two "practice games" against other players on the team you choose to play on, and then you're straight into the NBA season. Comparing this with MyCareer on console is probably a little unfair, with the console version featuring a full campaign that follows a player from high school all the way to the pros. But when the only difference between MyCareer and the Play Now mode in NBA 2K21 Arcade Edition is the ability to create character and play two games in a quiet arena, it is certainly a shallow, unfulfilling mode.

Those practice games shine a direct spotlight on just how barebones NBA 2K21 Arcade Edition is. You play these practice games in empty arenas, and because there are no fans, there's no crowd noise to distract you from the fact that audio lines are repeatedly used. Any time either team brings the ball up the court, a single voice track of players yelling occurs, and it's always the same words in the same voices--with "HERE WE GO! GET IT GOIN'!" being the most recognizable of these repeated phrases. It's super annoying.

While the players on the court look good on the phone, the occasional errant movement or visual glitch breaks immersion fast

You'll also see lots of repeated or clunky player animations. For example, in my three-on-three practice game I drew a foul and was sent to the free-throw line. I made the first free throw, and my player gave high-fives to the players behind him. The problem was, because this was three-on-three, there were no players there to receive the high fives. My player slapped the air and didn't miss a beat, which suffice it to say looked really strange as it played out.

NBA 2K21 Arcade Edition tries to bring the NBA 2K experience to mobile, but it throws the ball out of bounds more than it sinks the open jumper. While the players on the court look good on the phone, the occasional errant movement or visual glitch breaks immersion fast. The repeated audio cues are annoying, the limited mode selection limits the game's longevity, and the touch controls are a detriment. There's a solid NBA game here if you use a controller, but there are so many frustrating elements around it that it's better for everyone to not enter this NBA Draft. 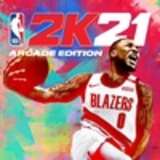 Jason Fanelli went hard in the paint in NBA 2K21 Arcade Edition for around six hours, making the playoffs with his beloved Philadelphia 76ers. The app was downloaded from Apple Arcade. 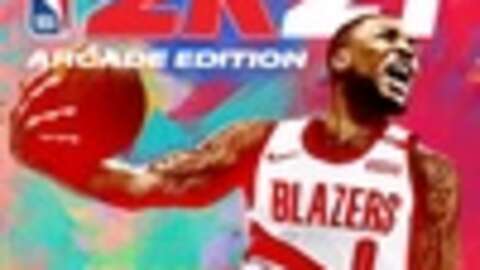