Visual Concepts has tweaked and buffed out the annoying gameplay traits that plagued its original hoops game, and the result is a highly polished product.

Around this time last year, Sega released the first 128-bit hoops game in NBA 2K. Its crisp, detailed graphics and innovations such as an intuitive post-up game were certainly impressive, but under the overwhelming shadow of Visual Concepts' wildly popular NFL 2K, it didn't quite live up to expectations. NBA 2K was a fun little basketball game, but it wasn't nearly as polished as its football counterpart. There were complaints about the flawed passing game, the needless animation sequences that slowed the pace of the action, the pump fake that too frequently got the computer defender off his feet, the easy to master free-throw system, the lack of an effective spin move, and the frequent play-stopping collisions on dribble drives, among others. Visual Concepts took all those problems and dumped them in the trash like a reverse-360 thunder dunk from Vince-sanity. The result is NBA 2K1, a more sophisticated, refined, realistic, and enjoyable hoops game.

The game features eight modes of play: season, franchise, exhibition, network, tourney, practice, quick start, and street. Of course, the franchise, street, and network modes are new to this year's version. Like its football counterpart, the game runs relatively well over the network, but it also features a more polished network interface. In the network menu, you can set several essential filters such as the opponent's rate filter (poor to great), keyboard filter (must have, none, or both), and game mode filter (street, exhibition, or both) to effortlessly find the most suitable online matchups. Further adding to the intuitive network interface, NBA 2K1 has ten chat macros that can be set ahead of time and are assigned to keyboard buttons for talking trash during a fast-paced ball game. With all our preferences set, we took the game online. We played a couple of games without any lag-induced slowdown issues. If the mostly successful NFL 2K1 online experience is any indication, its NBA counterpart shouldn't have any problems handling networked matchups, even when thousands of SegaNet players get online.

The franchise mode in NBA 2K1 works much like the one in VC's football game. You can guide a team through several seasons with the ability to sign, waive, trade, and draft players. Virtual GMs can track everything from their team's success over several years to specific player needs by position. New to NBA 2K1 is the ability to track team and player career statistics. Now you can keep track of Antoine "employee number 8" Walker's scoring average and "Mount" Mutombo's block totals over multiple seasons. Generally the franchise mode adds immensely to the game, with one minor weakness. The draft picks' names are all combinations of the first and last names of existing NBA players. So, you'll get names like Grant Abdur-Rahim and Zydrunas McGrady. It can get downright laughable at times, especially for those who know the game and its players. Of course, it allows the commentators to actually call out the names of rookies during a game rather than referring to them by their jersey numbers.

The game's new street mode is also one of its most entertaining. It can be played both on- and offline on real-life blacktops such as Goat Park in Harlem, The Cage on West 4th in New York, Franklin Park in Chicago, and the famous Holcombe Rucker Memorial Park. The four street courts are re-created in photo-realistic detail, as specific churches, buildings, and on-court trimmings are easily recognizable. On these realistic courts, you can compete in a variety of matchups, and each of these games adds a different dynamic, from the up-tempo three-on-three contests to the more traditional NBA-style five-on-five games. This mode really captures the essence of street hoops, as there are no screaming fans or irritating announcers - passing cars and player taunts are only the ambient sounds. Of course, even the most unique modes of play are mundane without solid gameplay, and NBA 2K1 assertively delivers in that department as well.

The game shares its default control scheme with last year's version, but the analog support seems to be a little sharper, with varying levels of player movement. On the offensive end of the court, NBA 2K1 features four dribble moves, twice as many dunks as the original, four basic post moves, higher precision in long-range passes, and the ability to pass out of any shot. This year, players can use a same-hand, behind-the-back, or a regular crossover, depending on their position in respect to the defenders. The spin moves return, but they are now much faster and easier to execute. In fact, it is easier to combine these moves and to string together mad dribble-drive moves. Visual Concepts has also pumped up the dunk animations in the game. There are twice as many dunks as the original, with throw-downs like Rider's "East Bay funk," Jordan's leaner, double-clutch dunks, and two-handed windmills, among others. Both the dribble moves and the dunks are very much player specific, as attempting a dribble move with "Big Country" or to taking it strong to the hole with old man Stockton would be ill-advised.

In the post, players can now execute one of four moves: They can roll to the right and shoot, roll to the left and shoot, fade away, or shoot a hook. This adds greatly to a post-up game that was already quite effective in last year's version. Thankfully, Visual Concepts has removed the universal left or right spin move from the post-up game, making it more important to back the defender down and to find the right angle to get the shot off. Of course, you can expect the computer to throw all of these newfound skills at you, especially in the pro and all-pro modes. It seems that the computer-controlled offenses have gone back to basketball 101 and have returned as smarter AI ballers in NBA 2K1. Don't leave your man for a second, because he'll make a beeline to the basket for an alley-oop throw-down.

The offensive gameplay does have a couple of minor quirks. After playing several games, you'll realize that there are some questionable charge calls being consistently made in the game. On collisions during drives to the hole, the defensive player usually gets the benefit of the doubt. All things being equal, there are far more charge calls than there are defensive blocking fouls - even in situations where the defensive player is clearly out of position. The second thing that bothered us was the seemingly mechanical switching on defense. If you lose your defensive assignment, a computer defender quickly steps up to pick up your man, which is fine. But he usually doesn't switch back, so it's easy to end up with needless mismatches on the defensive end.

Overall, though, the defenses are smarter and more adept in this year's version. The computer-controlled defensive players position themselves better and are able to react to picks and cuts quicker in NBA 2K1. Last year's game compensated for bad fundamental defense with too many blocked shots and with unrealistic collisions on dribble drives. This year's game is more about proper positioning and defensive decision making, and blocking shots is more difficult, as it should be. The concept of proper positioning is evident in the rebounding game as well, where it is more important to box out and time the jump properly. Unlike last year's version, even shorter players can rebound if they get between their man and the basket for a board.

Visual Concepts has also tweaked the free-throw system in hopes of making it tougher to master and more player specific. The arrows are thinner, and the camera perspective makes the basket seem farther away, which is all designed to add difficulty to the free-throw system. Unfortunately, you'll be able to effortlessly line up the arrows and shoot a high percentage after a few games. During a season with the Lakers we shot 86 percent with Shaquille - enough said.

Along with its more intuitive gameplay and new features, NBA 2K1 has also improved graphically. The textures are more detailed and richer when compared with last year's version. The players also look more realistic, as their skin wraps seamlessly around the skeletal models. Visual Concepts has also smoothed out the rigid animation that was so evident in last year's version. The player movements are more fluid and authentic, as in the NFL series. Overall, the players are also more active in NBA 2K1. During the pregame introductions, players will chest-bump, high-five, and otherwise stretch and fidget as they wait for the tip. In game situations, they will help teammates off the floor following a charge and step up to a teammate at the free-throw line to give encouragement.

In last year's game, Visual Concepts struggled to find the right balance between realism and gameplay. In NBA 2K1, the developers are closer to finding that elusive equilibrium. The game has crisper visuals, smoother textures, fluid animation, realistic and entertaining gameplay, and new modes of play such as franchise, street, and online. Visual Concepts has tweaked and buffed out the annoying gameplay traits that plagued its original hoops game, and the result is a highly polished product. NBA 2K1 has stepped out of the shadows of its football counterpart and shines as a multilayered and entertaining sports game on its own merits. The only thing missing from this year's version is that legendary street ballers such as Earl "The Goat" Manigault, Oakland's Demetrius "Hook" Mitchell, Waliyy "The Main Event" Dixon, and Willie Jones from DC are not in the game, despite the addition of the new street mode. Perhaps that's something Visual Concepts is saving for next year's version. 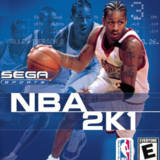