This flaky action game falls short of the darkly funny teddy-bear rampage promised by the concept.

Naughty Bear is an action game with one joke, and it's in the title. You play as Naughty Bear himself, who flips out after not being invited to a birthday party. The proportionate response for the fuzzy psycho is, naturally, to terrorise, maim, and murder the other bears living on Perfection Island. Although the sight of one teddy bear bludgeoning another to death is as arresting as developer Artificial Mind and Movement presumably intended, the bear-on-bear extreme violence is the game's only real hook, and it's stretched thin over the course of a full-sized game. Couple that with some shaky basic mechanics, and Naughty Bear becomes a hard sell.

In Naughty Bear, you earn naughty points for killing and terrifying your ursine neighbours. The more varied your reprehensible acts, the more points you earn, and the game enables this with a good, if not astounding, mix of weapons that includes knives, bats, guns, legs of meat, and the like. Further potential for death-dealing diversity comes courtesy of a selection of traps and contextual environment kills--you can slam a bear's head in a car door before he can drive away to safety, for instance, or cram the phone he was using to call for help down his throat. The violence is strong but cartoony; fluff will fly and your victims will whimper, but there's no damage modelling to speak of--no dismemberment or mutilation that would make it stomach-churning.

Combat is basic and requires little in the way of skill. There's one button for hitting, which can be tapped repeatedly for a combo or held for a heavy blow, and another button to dodge. Once your victim is suitably injured, you are offered an "ultra kill" prompt, triggering an execution move determined by your weapon of choice. These moves are amusingly brutal but, with just one animation per weapon, get old after a while.

It's not all about killing, though. Scaring your neighbour bears out of their wits is rewarded with naughty points as well. You can frighten them by roaring "boo" within earshot, by having them come across a dead body, or by having them witness you murder their buddy. For a more effective scare you can catch them in bear traps first to access a button-prompted "super scare", which amounts to a big "boo!" in their face. Torment them hard enough, and they'll go insane and eventually become suicidal. Making a teddy bear beat himself to death with a stick is a uniquely memorable experience.

Rather than having a linear single-player experience with a straightforward narrative, Naughty Bear has seven collections of increasingly difficult episodes that must be unlocked by winning a certain number of bronze, gold, and silver trophies, given out for high scores in the preceding episodes. For most players, this will mean dipping into the early episodes of each chapter multiple times to pick up enough trophies. Each chapter is themed on a scrap of story to explain Naughty Bear's rampage: in one, he's being spied on with surveillance cameras taped to birds; in another, he has not been invited to a cookery lesson that winds up raising the dead. Like most aspects of Naughty Bear, the promise of humour (zombie bears!) doesn't get fully exploited--each chapter contains much the same micro-story reprised multiple times.

Each of these episodes contains a short chain of smallish areas; you progress by completing an area's challenge and unlocking the gate or bridge to the next. The challenge is generally to earn a certain number of points and kill or scare bears under certain conditions: don't be seen more than five times, for example, or finish the area within a time limit. For extra points, you can destroy special items, like birthday presents, by tossing them in a fire or toilet. Your score multiplier, raised by uninterrupted naughtiness, is key for getting the gold trophies; you can stop it from dropping by destroying smashable items such as teapots and windows between kills and scares. It's a likeable approach that works well because each episode is fairly short and based on a specific challenge, but it still feels like something is missing. Open-world, open-ended play or a straight, story-driven adventure might have been more satisfying; this collection of themed challenges would benefit from something more than high scores and a skimpy plot to tie it together.

Technically and artistically, the visuals are competent; Perfection Island is workmanlike, but perfect it's not. The bears look reasonably good and solid, and they flee for their lives convincingly, but you won't come away from a session with Naughty Bear thinking about how lovely it looked. It doesn't help that the environments are small and repetitive, ranging from cabins in the woods and tea rooms inside cabins in the woods to factories inside cabins in the woods and discotheques (also inside cabins, also in the woods). Stages are set at different times of day to mix things up, and the stormy night of a zombie bear invasion injects some much-needed atmosphere, but it's hard not to notice the same few elements (furniture, vegetation, more cabins) used over and over.

The game mechanics, combat included, are generally rough around the edges in a way that detracts from the point-scoring, multiplier-growing experience. In stealth challenges, for example, it's hard to predict whether another bear will spot you or not. The only surefire method is to stay in the wooded areas into which they can't see until they are far away, which hardly makes for tense, dynamic stealth action. Those rough edges also extend beyond the gameplay: we encountered a handful of crashes in our play-through, with the game freezing up in the transition between zones and during multiplayer.

Besides the actual episodes that make up the game, there's plenty more content to unlock by making progress and getting high scores, including costumes for Naughty Bear, each conferring different degrees of life, strength, speed, and accuracy, as well as badges which act as perks in the multiplayer modes. The crucial issue is that the basic gameplay isn't deep or diverse enough that you want to replay episodes several times to gain access to all of that content. Requiring you to gain a number of gold trophies before you can play later episodes extends the game, but it doesn't enhance the fun.

The four online multiplayer modes, at least, are a diversion from the single-player marathon of unlocks. Cakewalk mode involves holding on to a golden cake for as long as possible, Jelly Wars involves collecting jellies faster than the other guy, Golden Oozy has you fighting for a single all-powerful gun, and Assault is a basic deathmatch. There's also a nice variety of weapon pickups and power-ups--another old-school touch--that give you speed, strength, or shielding. The combat system, however, which at least serves its purpose in single-player, disappoints in multiplayer games, where you mostly find yourself running up to your opponents and repeatedly smacking them in the hope that you'll get the ultra kill prompt first. Still, beating down your friends as teddy bears makes for an entertaining new niche in the online multiplayer arena, and matches are bound to provide a few laughs.

Initially, Naughty Bear appears to have the makings of a darkly funny gem; the teddies are cute, the antihero is unpleasant, and the violence is as jarring as intended. The narrator, seemingly a kids' TV presenter who has cracked under the pressure, is alarmingly creepy. But those bare bones don't get fleshed out. With its key idea, basically a Care Bear on a rampage, underserved by the storytelling, and the basic mechanics not strong enough to carry the game on their own, Naughty Bear is a fun diversion for only a short while. As time goes on, though, it feels like more of a series of missed opportunities than the subversive, jokey action game promised by the title. 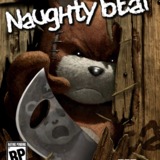