NASCAR Rumble is an over-the-top racing game more akin to San Francisco Rush and Beetle Adventure Racing than to NASCAR 2000.

Continuing EA Sports' ongoing attempts to do to other sports genres what Midway's NFL Blitz did to football, NASCAR Rumble is an over-the-top racing game more akin to San Francisco Rush and Beetle Adventure Racing than to NASCAR 2000.

Like SF Rush and BA Racing, NASCAR Rumble leaves the raceway for the real world and features power-ups, shortcuts, and a broad general view of physics. The environments span town and country, day and night, but all seem to favor the South, both in location and theme. Power-ups include the standard turbo and invulnerability, and the not-so-standard storm, twister, and freeze, which obscure enemies' vision, throw them about, and lock them up, respectively. They can also be used against you too, and are often, but their effects can be avoided by simply slowing down enough.

Where NASCAR Rumble really shines is in its replay value, as there's a lot to do in the game. You begin as a rookie, and you must win six championships - each made up of four laps of three courses each - before progressing to the pro ranking, and then do it again to gain the elite title. That's a lot of racing, almost too much as a rookie, since the difficulty is set a little too low to be challenging. But once you beat each championship, a local racing legend is unlocked for you to race against, and they're not called legends for nothing. If you take one on in a championship in the legend mode and manage to beat him, you can race as him from then on, or team up with him in the cyber-team setting. There's also a mystery cup composed of three random courses and the EA Cup, which spans six tracks. And you always have the option to increase or decrease the number of power-ups per championship.

NASCAR Rumble also succeeds in providing a consistently fast frame rate while having little or no problems with clipping or pop-up. However, the environments, while varied, are muddy and plain, and the level design has absolutely nothing on Beetle Adventure Racing. But while the graphics can be something of a mixed bag, the sound is perpetually bad. The music in the game is by and large made up of repetitive guitar rock, and the "color commentary" comes off like the outtakes from the RC Stunt Copter recording session. Few are funny, and ones such as "He's got savoy-faire," and "Like a rabbit on a dog track" grate immediately.

The multiplayer modes more than make up for that major detraction, because they offer quite a lot. Not only are two-player competitive championships available, but two-player cooperative tournaments and legend team-ups are as well. Sure, the frame rate takes a dip, and pop-up is evident, but neither obnoxiously so. Hopefully, this level of depth will become standard for all racing games.

Playing NASCAR Rumble, you get the impression that the developers set out to make a fast and simple racing game with a lot of replay value, and they've very much succeeded. Thing is, it ends up a little too simple to deliver the maniacally addictive experience provided by similar "unrealistic racers." It's good enough to hope for a sequel filled with even more shortcuts and power-ups though, and if you're a PlayStation owner who's suffered from N64 envy because of SF Rush and BA Racing, you at least have something similar to help tide you over. 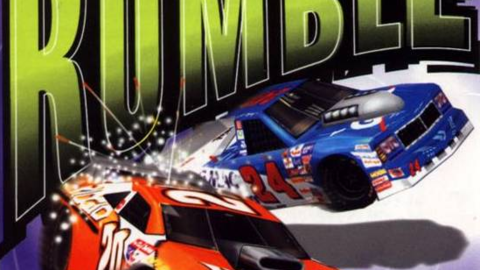 NASCAR Rumble is an over-the-top racing game more akin to San Francisco Rush and Beetle Adventure Racing than to NASCAR 2000.