NASCAR Heat 2002 chooses to err on the side of simulation racing and, for the most part, comes off as a highly realistic replica of stock-car racing.

The Xbox launch is graced with two NASCAR games, one from Electronic Arts and another, NASCAR Heat 2002, from Infogrames. Of the two, Heat 2002 is aimed more directly at hard-core fans of stock-car racing. The game will challenge you to be technically sound in your driving style, and it provides plenty of customization options. Fans will also be treated to prerace instructions by actual pros such as Dale Earnhart Jr. and Jeff Gordon, as well as a television-style presentation. Still, there are some specific issues with Heat 2002, the least of which is the game's frame-rate problems, that limits its potential.

Like the PlayStation 2 version and previous incarnations in the series, NASCAR Heat 2002 has three primary modes of play: championship, race-the-pros, and the beat-the-heat challenges. Naturally, the meat of the gameplay is in the championship. Here, you can tackle an entire NASCAR season, all the way from Daytona to New Hampshire. For the impatient, shortened seasons are also available. The championship mode works like an actual NASCAR season. Drivers are awarded points for their finish position in each race, and these points are then tallied to declare a season winner. Unfortunately, in Heat 2002, there is no fanfare for winning high-profile races such as Daytona and Talladega. The only reward, in terms of specific elements of presentation, comes with the game's brief ending sequence after all the races are completed.

Race-the-pros and beat-the-heat serve as the secondary modes of play in the game, but they are actually quite involved and challenging. As its name suggests, in the race-the-pros mode, you must try to beat the best times of a variety of NASCAR pros by racing three laps in the tracks that they each specialize in--to defeat each pro, you must race two to four races. As it should be, race-the-pros is probably the toughest mode in the game. The NASCAR pros run the most optimal lines, and even the slightest mistake will leave you in their dust. While the rest of the game is relatively easy to complete, even the most seasoned racing fans will find race-the-pros quite challenging. The only issue is that there really aren't very many individual challenges in this mode, as there are only six pros to beat.

The beat-the-heat challenge is also the most diverse of the gameplay modes in Heat 2002. It is akin to the license tests in Gran Turismo. However, here, you will not only have to drive the best lines but will also have to learn the basics of driving strategy. The mode is split up into six sections: basics, passing, rivals, reflex, advanced, and the kings. Each section presents a different type of challenge. In basics and passing, you'll be learning about taking the best lines into turns and using slipstreams to pass opposing racers, respectively. But in the reflex and advanced modes, things get a bit more complicated. The reflex mode, for example, is designed to teach the driver the basics of dealing with crash situations. You will be thrown into the middle of a crash and must drive unscathed through the smoke and mass of wreckage to finish in one of the top five positions. In each of these beat-the-heat races, bronze, silver, and gold medals are awarded, depending on your finish position. This gameplay mode, which has now become a staple of the NASCAR Heat series, is a welcome diversion from the grind of playing through an actual season. It forces you to learn specific driving techniques, which are actually useful in the other gameplay modes in Heat. However, the tutorials themselves aren't very challenging, and the beat-the-heat mode can literally be completed in a couple of hours.

The gameplay modes are quite adequate, but the real analysis of NASCAR Heat 2002 begins when the cars hit the asphalt. Although still very impressive and rooted firmly in realism, this is where Heat 2002 begins to show some significant chinks in its armor. For starters, game's physics system has a few issues. The game attempts to achieve the ultimate in simulation NASCAR racing, but the twitchy handling of the racers and the obvious lack of a draft meter keep the game from achieving those goals. It's about time that developers realize that NASCAR racing games don't need tight handling. And in fact, most NASCAR games would benefit from more deliberate handling characteristics for the cars, because NASCAR racing demands precise and minute movements--the handling needs to be forgiving to accommodate just that. In Heat, the cars respond to even the slightest movement of the analog stick, which means that usually you have to be extremely careful in maneuvering the cars. Which brings us to the second point: drafting. In the longer tracks, NASCAR racers rely pretty heavily on drafting and using aerolift to get ahead of the pack. Although the draft in Heat is quite evident at times, there is no draft meter. This means that regularly, you're not sure whether you're actually in the slipstream of the car in front of you or whether you need to change strategies and look to move your car into another line. This can cost you your position and valuable points in some of the longer tracks. In turn, the game's shorter courses become much easier than the longer ones, like Daytona. This throws the gameplay out of balance, because you will constantly find yourself fishing in top positions in the shorter ovals and battling to stay with the pack in the longer tracks.

Another aspect of NASCAR racing that the development team seems to have missed is the use of braking. Professional racers almost always use a brake/throttle combination when diving into turns, particularly in the smaller ovals with tighter turns. In Heat 2002, all you essentially need to do to stay ahead of the pack is to lay off the throttle a bit until you hit the apex of your racing line and then punch the throttle into the straightaway--the brake, which is mapped to the left shoulder button on the Xbox controller, is hardly used. It comes into play only in road courses like Watkins Glenn. This is a pretty specific problem, but when a game is as rooted in simulation as NASCAR Heat 2002, issues like these are further magnified.

Still, there is plenty to like about the gameplay in Heat 2002. Most prominently, the game's AI comes eerily close to mimicking the tendencies of actual NASCAR drivers. Opposing racers will ride the slipstream and make passes by drafting. They will also use more advanced strategy, such as performing high-low passes and blocking. It would have been nice to see more interaction between specific teammates, but in general, the excellent AI in Heat 2002 will impel you to drive intelligent races to win. Also outstanding is the game's damage system. As with most NASCAR races, there are bound to be crashes of varying degrees. If you are unfortunate enough to be involved in one of these wrecks, your car will take both visual and performance damage. For example, if you're spun around and hit by an oncoming racer head-on, you might bust your radiator, in which case, your car will be rendered virtually useless, dropping you out of the race. Hit the wall, and your right suspension might be in the fritz, forcing you to pit. The pit stops are interactive and full-featured, so, as your car rolls into the pit, you can decide the amount of fuel you get, change the tires and tire pressure, adjust the diagonal wedge of the car, and even decide whether to make specific repairs.

Although the gameplay system in NASCAR Heat 2002 does have some issues, it is generally quite realistic and entertaining. However, that same level of polish can't be found in the graphics. The game has some major issues with slowdown--for example, when using the rearview mirror in a crowded race, the game slows to a crawl at times, rendering that option virtually useless. The cars are highly detailed, with almost perfect, yet flat, texturing for each of the racers and the tracks, and although lacking in ambient geometry, they are good replicas of their real-life counters. However, all of this can go to waste in a racing game if the frame rate doesn't remain solid. And in Heat 2002, there are times that the frame rate actually detracts both visually and in terms of gameplay. As mentioned, not being able to use a rearview mirror in a crowded race because of slowdown is a significant disadvantage. The development team got a lot of things right with the graphics in Heat 2002, but the frame rate issues, which persist for about 15 percent of the time, are quite distracting.

NASCAR Heat 2002 is almost devoid of a soundtrack, which isn't such a bad thing. This is because the game does a good job of re-creating the sound effects of an actual NASCAR race. The growling engine sounds for each racer combine to create a single immense howl, as the high-powered stock cars barrel around the track. The crowd cheers based on racing situations. Overtake your rival for first place, for example, and the grandstand will bellow a mammoth cheer. The screeching of the tires and the grinding of the chassis serves as the audio backbone for the game. The fact that the team didn't include any music during the races was a smart move, and the game achieves a greater level of realism because of it.

NASCAR Heat 2002 chooses to err on the side of simulation racing and, for the most part, comes off as a highly realistic replica of stock-car racing. A lot of the driving strategy and car customization options that go along with the sport has made it into the game, and the peripheral modes--such as beat-the-heat, race-the-pros, and the option to link up Xbox units for multiplayer races--add much needed longevity to the game. There are some issues that plague the game in general, the most prominent of which is the fluctuating frame rate. Still, NASCAR Heat 2002 should be quite appealing for its intended audience: die-hard fans of NASCAR. However, its laundry list of customization options and relative focus on technical driving may prove frustrating for borderline fans of the sport. 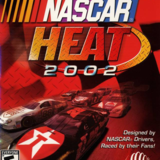