This enjoyable anime-inspired fighter nails the look and feel of the source material but places too much importance on mediocre minigames.

Naruto Uzumaki is a colorful ninja who excels in combat but can be kind of annoying. It's therefore fitting (if unfortunate) that while Naruto: Ultimate Ninja Storm is a great fighting game, it's also one in which you have to endure a lengthy, story-driven Ultimate Mission mode in order to unlock most of the playable combatants. Ultimate Ninja Storm does a lot of things very well, but exploration, item collection, and storytelling are not among them.

The first thing you'll want to do in Ultimate Ninja Storm is pick a favorite character and dive right into combat. You can't play the game before its mandatory installation is finished, though, and because there's almost 4GB of information that needs to copy to your hard drive, you'll wait at least 10 minutes. Once that's out of the way, the Free Battle mode lets you choose who you want to fight as and against and where you want the fight to take place, and it gets the action under way with a minimum of fuss.

Although there's no tutorial option in Ultimate Ninja Storm, the controls are simple enough that they don't take long to figure out. The face buttons are used for jumps, projectiles, melee attacks, and chakra charging. The shoulder buttons are used to block and call in support characters. The D pad has four different items mapped to it, and the left analog stick is used for movement. You're free to run anywhere you like in the large arenas, and even when combatants are far apart the camera does a superb job of framing the action. Occasionally you might end up viewing the battle from a camera that's more or less looking over the shoulder of your opponent, but the shifts in perspective are so smooth and so intelligent that the action very rarely gets confusing. It's a testament to how great the camera is and how accessible the controls are that this holds true even when you end up defying gravity in fights that move from the ground to the vertical surfaces of walls in some arenas.

Since there's only one button used for melee attacks, that's your go-to anytime you're close enough to an opponent to land a punch. There are plenty of lengthy and satisfying combos that can be performed using very little else, but getting a combo started doesn't necessarily mean that you'll get to finish it. That's because blocking is relatively easy--though not to the point that you can simply hold down a shoulder button and never worry about getting hit. Once your guard is up you can hold it in place for a good amount of time, but this doesn't do you a lot of good. Your opponent will be charging up his storm gauge and become more powerful every time a blow lands, and ultimately your guard will fail and, because you were hiding behind it for so long, you'll be dazed for a few seconds when it breaks. There's an excellent risk-versus-reward mechanic that comes into play when you're having to play defensively; rather than keeping your guard up, you have the option to tap the block button repeatedly in an attempt to parry an attack the instant before it lands. If you succeed, you'll perform a substitution jutsu, evading the attack completely and appearing directly behind your opponent, ready to launch into a combo of your own.

One of Ultimate Ninja Storm's most interesting features is the use of chakra. You have a finite amount of this energy that can be used any time to make your existing moves more powerful, and the longer you charge up the chakra, the greater its effect is. You can dash across the screen in an instant by using it in conjunction with the jump button, for example, or turn three projectiles into 30 with a ranged attack. Using chakra with your melee attack will perform a character-specific jutsu attack, some of which look impressively like anime scenes as they play out. Managing your chakra can be every bit as important as guarding against an opponent's attacks--you can restore chakra at any time by standing still and holding down the chakra button, but doing so leaves you completely vulnerable.

Using your character's items well can also turn the tide of a battle on occasion, though it's unfortunate that reaching the D pad they're mapped to is almost impossible without briefly giving up either the left analog stick or the face buttons. Items that you can use at any time during a fight include consumables that boost stats and various thrown weapons that either lower the stats of enemies or simply do damage on impact. There's a lot of variety, and because some of the items are exclusive to certain characters, they're worth considering when it comes to choosing who to fight as. The basic controls might be the same for everyone, but the different fighting styles and battle items ensure that no two characters feel the same.

The problem is that only 12 of the 25 characters on the roster are available from the outset, and the only way to unlock the rest of them--along with extra moves, support characters, outfits, and awakening modes--is to play through the Ultimate Mission mode. Many of the missions you undertake are battles that you have to win while meeting certain conditions, and they make for some interesting challenges. Other missions, though, involve minigames that aren't nearly as much fun: You'll play hide-and-seek with the children of Hidden Leaf Village, you'll race through forests and vertically up the trunks of huge trees, and you'll wonder why you can't unlock the rest of the roster any other way. Worse still, wandering around Hidden Leaf Village between missions to find new missions and to collect the items and currency necessary to unlock new battle features stops being fun after 30 minutes, once you've seen everything.

Hidden Leaf Village looks great, but nothing interesting ever happens there. There are shops to visit, and there are characters with one or two lines of dialogue each to interact with; but until you near the end of the story missions (each is a flashback to a key event from one of the first 100-plus episodes of the anime), there's very little to test your skills there. Even the secret scrolls that you collect and subsequently spend on unlocking support characters are clearly marked on the map and impossible to miss, so picking them up feels more like a chore than a challenge. The controls you use while in Hidden Leaf are similar to those in combat, but here you use them in much more mundane ways. The only time you'll need to use your chakra, for example, is to open locked doors, and the only targets you'll be punching or throwing shuriken at are inanimate objects that all contain money or scrolls.

Regardless of the fact that Hidden Leaf is so beautifully realized in Ultimate Ninja Storm, and despite villagers' attempts to tell you that there are "a lot of people in it," the place feels deserted. More recognizable characters and generic villagers show up as you progress through the missions, but the village never really feels alive, and it would still feel quiet even if you multiplied the apparent population by 10. It's laughable, then, when one of your missions is to break up a fight between the characters Shino and Kiba, who, in an empty space that could comfortably accommodate a few hundred people, are arguing about getting in each other's way. More laughable still is the notion that their fight (read: quiet disagreement) is supposedly bothering people. Still, when other missions on offer include challenges like "play for 20 hours" and "walk 20,000 paces," that one almost qualifies as a highlight.

The real high points of the Ultimate Mission Mode--and, sadly, there are very few of them--are the boss battles that pit you against "giant" characters like Gamabunta and Gaara. Beating these missions requires a combination of the skills you've learned in regular combat and some rapid button-pressing reflexes for cinematic events during which command prompts appear onscreen. These encounters are not only the most spectacular-looking features of the game, but they're also a lot of fun and, since they're generally bookended by cutscenes, are some of the only times that the story is delivered via something other than a scroll of text.

Ultimate Ninja Storm does a great job of looking, sounding, and feeling like its source material. The combat is a lot of fun with a friend or against any of the AI's four difficulty settings. Unfortunately, though, to get the most from it you have to spend a minimum of 10 to 15 hours playing and replaying missions in a mode that's artificially long. The lack of online play is also disappointing given that it's practically a requisite for the genre at this point. Ultimate Ninja Storm's biggest problem as a fighting game is simply that it isn't just a fighting game. 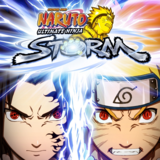