The fighting modes deliver some excitement, but the adventure loses its way with too many boring fetch quests and repetitive environmental puzzles.

Last year's Naruto: Rise of a Ninja was a promising start to Ubisoft's planned series of games telling the story of Naruto, the brash young ninja whose anime series has millions of devoted followers all over the globe. Rise of a Ninja also felt somewhat underdeveloped, though, leaving plenty of room for improvement in its promised sequels. Sadly, that potential for improvement has not been realized in its follow-up, The Broken Bond, and the flaws are not so easy to forgive this time around.

The Broken Bond's Story mode picks up where Rise of a Ninja left off and covers events that span episodes 81 to 135 of the anime. Unlike Rise of a Ninja, which incorporated clips from the anime to move the plot along, resulting in some jarring transitions between 2D and 3D, The Broken Bond uses its own beautiful graphics for all of the cutscenes, creating a much more cohesive experience. The story here starts out strong, with a dramatic battle that ends in tragedy. And it builds up to a solid conclusion, too, when Naruto and his fellow ninja are faced with a situation that tests just how much they're willing to risk for one of their friends. But between these two high points are a staggering number of underdeveloped storylines accompanied by boring fetch quests, which rob both the story and the gameplay of any sense of momentum.

The Broken Bond tries to do a lot of things and ends up doing very few of them well. This is a third-person action game in which you usually play as Naruto, and most of your time is spent venturing out of the safety of Hidden Leaf Village to complete various missions. You're typically accompanied by a friend or two, and you can switch between the members of your party at any time. This proves necessary, because more often than not, each party member possesses a jutsu, or ninja power, that must be used to overcome some environmental obstacles you encounter. Naruto, for instance, can perform his shadow clone jutsu to cross any broken bridge, and as luck would have it, nearly every bridge is broken. Using the powers of Naruto and his friends to overcome environmental obstacles like this is a neat idea, but it's not incorporated in an interesting way. There's never any thought required. Each time you see a broken bridge, you know you need to perform the shadow clone jutsu. Each time you see three red marks over the character you're controlling, you know you need to perform a jutsu that reveals hidden dangers. And so on. These obstacles crop up all the time, and they're always the same. Before long, they start to feel like a chore that slows you down as you make your way from point A to point B. And the fact that you'll be passing through the same few sections of forest repeatedly only compounds the tedium.

You'll also frequently need to find certain people or items in Hidden Leaf Village, and these fetch quests range from bearable to maddening. When you're fortunate enough to be playing as a character who possesses a jutsu that helps him detect hidden things, performing that jutsu will bring up an indicator that tells you the general direction you need to go in and gives you a vague idea of your distance from your goal. Hidden Leaf Village is a great environment, so hopping along rooftops and sprinting down alleys in pursuit of something can be enjoyable, provided you have at least a general idea of where you're going. But when you must track things down and aren't blessed with such a jutsu, these missions are a completely different experience. In these instances, all you get is an indicator that tells you when you're getting very close to the item you need to find, and it doesn't offer any sense of direction. The town isn't massive, but it is large enough that you can spend several minutes running around until you stumble upon the next item you need, and since these fetch quests usually involve gathering several items, finding one means you get to start running all over looking for the next one. Hidden Leaf Village is gorgeous, but by the time you find the last set of construction supplies or the last bag of potato chips, you'll be sick of it.

The one thing The Broken Bond does pretty well is combat. The fighting system is simple but very fast-paced and enjoyable. The X and Y buttons perform horizontal and vertical attacks, respectively, and can be chained together to perform a variety of combos. The importance of jutsu during fights makes them more than just button-mashing affairs. A key strategy is to pull off a powerful combo that temporarily incapacitates your enemy and gives you the time to perform a jutsu, and you'll be on both the performing and receiving end of a great variety of jutsu throughout the game. Regardless of which end you're on, the jutsu are usually involving. Most of them call up minigames that give both parties a chance to minimize or maximize the amount of damage. Some of these are quick-time events that require well-timed button presses, while others require you to pound on one button as much as possible. The best of the bunch are the targeting minigames, in which the attacker must try to get the defender squarely in the sights of a crosshair, while the defender scurries all over the place, desperately trying to avoid the incoming attack.

As much fun as the fights can be, the Story mode manages to make them repetitive and frustrating as well. Far too many of your battles will be random encounters against generic ninja opponents, and these opponents are such pushovers that the battles end up being just another thing that slows you down as you travel from one place to another. And near the end, when you must fight against a succession of powerful ninja in the service of the evil Orochimaru, there's a sudden, dramatic leap in difficulty. These opponents are elusive and capable of unleashing devastating combos followed by jutsu that instantly wipe out huge amounts of your health, and your earlier fights, and even your visits to the training dojo where you can practice your moves, may have left you ill-prepared to fight opponents such as these. Adding insult to injury, each time you fail one of these battles, you must watch the preceding cutscene again.

In contrast to the game's disappointing Story mode, the pure fighting modes are quite good, because they're made up entirely of the one thing the game does well. You can play single-character or tag-team matches locally against the AI or with friends, as well as face off against online opponents. With 30 playable characters, most of whom have differing fighting styles and jutsu, there's enough variety to keep these modes interesting for quite a while, though you'll need to progress through the Story mode to unlock many of those characters. There's a compelling ranked match system to online battles that has you earn experience points as you fight other live opponents. At certain thresholds, you'll fight a battle for the right to advance to the next rank, with the goal being to advance all the way to the most honorable rank of Hokage. Seeing your rank advance as you win more fights fosters a sense of investment in the ranked matches that can be hard to resist.

Visually, the game is beautiful. The richly detailed cel-shaded graphics bring the world of Naruto to life, and the streets and buildings of Hidden Leaf Village are the stars of the show. The first time you're set free in the village, you may feel compelled to just walk around and take it all in--the natural way that buildings catch the light, the way banners drift gently in the breeze, and all the little imperfections that make the town feel organic. Unfortunately, the forest areas you pass through repeatedly look and feel confined and manufactured by comparison, but Naruto and the other characters are animated with all the grace and smoothness befitting of cartoon ninja. The sound is also strong, with music that runs the gamut from catchy, exciting rock instrumentals to haunting compositions using traditional Japanese instruments. You're also given a choice between Japanese and English voice tracks, both of which are very well done by actors that are believable in dramatic and comedic moments alike.

Completing the Story mode will take most players about 10 hours, and the majority of that time is spent on boring fetch quests that have you visiting the same areas and avoiding the same simple obstacles over and over again. Fans will wonder where the excitement of Naruto's adventures went, and newcomers will be left wondering if the anime really spends so much time having Naruto gather fireworks and flowers for shampoo rather than doing things that seem to matter. The saving grace of this package is the fighting modes, which, while a bit too shallow to stand on their own, have enough characters and enough modes to keep fans occupied for quite a while. 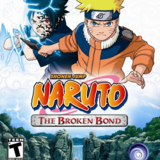