There's a lot of potential to make good games using the Naruto license. The comics and anime series are filled with elements that can transition well to games: a huge cast of ninja characters with varied motives and personalities, an interesting fantasy setting, and, of course, lots of supernaturally powered ninjutsu battles. Sadly, Ultimate Ninja Impact fails to capitalize on all the great things the Naruto universe has to offer.

Ultimate Ninja Impact adapts the storyline of the most current Naruto anime series, Naruto Shippuden. In the Ultimate Road campaign, Naruto has returned to Hidden Leaf Village after three years of intense training to be reunited with many of his friends and comrades. However, his dear companion Sasuke, who has defected to serve the insidious Orochimaru, is not among them. Naruto learns of some pressing events happening in the village and elsewhere, and he immediately sets off with his teammates to try to set things right, only to get tied up in a much bigger plot that involves several different factions. The way the game adapts the story is admirable, though if you're already familiar with the way events play out (having read the comic or watched the show), there isn't much in the way of surprises.

The main game is divided into several chapters, each of which contains a map screen that allows Naruto and company to advance to various events and stages. By completing certain stages or objectives (some mandatory, some optional), new playable characters, missions, and special ability cards can be unlocked. Successfully completing levels and performing skillfully in battle also earns you ninja points, which allows you to purchase character-enhancing card pieces and upgrades, along with extras like music or wallpaper. Each chapter has a separate completion gauge that lets you know how much further you have to go before you've found and collected everything available. There's a lot of emphasis on collecting bonus goodies in Ultimate Ninja Impact, and this element of the game is well executed. Visuals and sound are also quite nice: The character models are faithful to the original designs and are surprisingly detailed. A heavy amount of voice-over also accompanies the story in both English and Japanese audio tracks.

The actual combat, however, is considerably less exciting. Ultimate Ninja Impact borrows liberally from the design of Tecmo Koei's Warriors games, for all of the good and bad that may entail. Controls are easy to grasp: You can jump, air-dash, or guard, as well as perform basic attack combos and throw weak projectiles with simple button presses. The chakra attacks are slightly more complex; they require you to first charge up your chakra meter sufficiently by holding down the triangle button and then either execute them at the end of a basic combo string or hit a set button sequence. Some of these skills require specific timing, which the game doesn't always teach well, but for the most part, screen-clearing, mega-damaging attacks are merely a few button presses away. Filling both your chakra and awakening gauges while fighting allows your character to enter a special, temporary powered-up mode. While chakra and awakening attacks have varying properties for each playable character, the basic means of execution is the same for each fighter, which allows players to quickly adjust when the game requires you to use a different cast member. However, it also means that the number of different actions each character can perform is strictly limited. Characters can gain levels and equip stat-boosting character cards to enhance their abilities, but their combat capabilities rarely expand beyond a basic skill set.

Limited fighting capabilities would be perfectly fine if the action itself was intense and engaging. Unfortunately, this is the area in which Ultimate Ninja Impact falls flat on its face. Much like the Warriors games that seem to have inspired it, Ultimate Ninja Impact puts you in small maps to fight big packs of enemies. While mowing down a crowd of ninjas is fun at first, it quickly becomes less satisfying when you realize just how utterly stupid and ineffective most of the enemies are and how easy they are to wipe out with a basic combo. Each mission contains several objectives, most of which are simply variations of "go to this place" or "beat these enemies." You quickly find yourself repeating similar objectives for each new mission you reach, putting up with annoying background pop-in as you carelessly wipe out another platoon of generic ninjas. Every now and then, you might encounter a slightly tougher enemy, an enemy with a gimmick, or a boss. These enemies are unique in that they actually pose something of a threat and will aggressively attack you. However, they still fall quickly to basic evasion and rapid-fire damaging chakra combos. Ultimate Ninja Impact on anything but the hardest difficulty is a very easy game, and unfortunately, said hardest difficulty doesn't unlock until well into the campaign. As a result, the combat quickly turns into a boring slog that you only put up with to try to collect NPs and nifty new cards.

The game features a few additional modes as well. Tag Battle lets you team up with either a computer-controlled companion or a friend (with his or her own PSP and copy of the game) to take on specially scripted missions for NP rewards, while Extra Missions offers more challenging single-player objectives to try to complete for additional rewards. (Given the game's typically lax difficulty, these missions are only slightly more taxing than your standard story fights.) You can use your full army of unlocked characters in these fights, which makes them the main place to play and level up favorite cast members that don't get much attention in the central plot.

But when the fighting itself is lacking in excitement, it really doesn't matter how many extra modes you throw in--inherent mediocrity is rarely remedied by putting it in different dressings. Ultimate Ninja Impact doesn't try to do anything beyond offering a bog-standard action game where you fight a lot of enemies at once. As a result, it winds up being a game that is mildly entertaining for short periods of time but quite tedious in extended play sessions. In the end, Ultimate Ninja Impact simply doesn't live up to the intensity of its title. 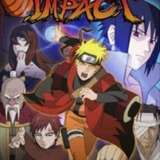