Naruto's latest is a good fighting game that's held back by an unbalanced Story mode and laggy online play.

Naruto Shippuden: Clash of Ninja Revolution 3 is a good fighting game, with a wide cast of balanced fighters and a combat system that lets button mashers have some fun while also offering just enough depth for more serious players. This is an entertaining one-on-one couch-friendly fighting game that hides some surprising depth beneath its relatively simple exterior. While Story mode and the much-heralded online versus play don't quite meet the same standards, Revolution 3 is a good-looking and well-made fighter for the Wii.

Versus mode is the standout element of the game. The fights take place in 3D arenas plucked from the Naruto universe, and combat is either one-on-one or between two tag teams of two. Characters can all use chakra to activate some abilities while trying to beat the life out of the enemy. Swapping tag-team characters or activating powerful, chakra-devouring secret techniques requires only a single button press, as does evading. Although each character has a strong and weak attack, a throw move, paper bombs, and secret techniques, the vast majority of actions require only one button press--but one button press timed very well.

The demands on player precision are what make Revolution 3's fighting system so engaging. Plumbing the depths of each character's move set is fulfilling, but the core of success and failure revolves around watching your enemies and nailing your evasion and strike timing better than they do. Evasions are quick flits to either side by default, but when timed just at the moment you would take damage, they instead consume some chakra and position you behind your opponent, ready to strike or already attacking. You can similarly counter-throw, turn a hard fall into a chance to hit, and cancel out of combos. In tag-team battles, swapping in your other character is added to the list of potential variables; it's an especially important variable, since the out-of-play character recovers health and chakra fast. Some moves can be executed only by swapping specific characters in mid-combo. This system allows players to duke it out with basic attacks and enjoy themselves, but includes more advanced techniques that add some depth for dedicated brawlers.

The game features 40 of Naruto Shippuden's characters, and although most of them have to be unlocked, they're a diverse and entertaining stable of combatants who nicely balance each other. Characters are drastically different from each other in feel and play. Naruto, with his raw strength, throwing knives, and shadow clone jutsu plays nothing like the puppet-master Sasori, let alone the living-clay-bomb-maker Deidara. The whole cast feels fairly weel balanced, so you can experiment with different characters and not have to worry about being completely outclassed.

Combat does have a few weak spots. Characters don't auto-face their opponent, and it's more difficult than it needs to be to get your fighter facing the correct direction, and by the time you finally get yourself turned around, you've probably endured a nasty beating. More of an issue is that when you add in three or four players, combat loses the precision that makes it so enthralling. Multiple opponents only aggravate the facing problem, but the real issue is that a game about very precise timing falters when you throw in too much chaos. Having three or four fighters onscreen at once also causes occasional frame-rate hiccups. That noted, both two- and four-player combat allows you and another player to play as tag-team teammates, which is ridiculously challenging but fun. If you've got a friend or three to play with, the local Versus mode alone is entertaining enough to recommend the game.

Online play is a first for the series, and Naruto's debut here is not without issues. You can add friends using the game-unique friend code, but you can also simply select ranked or unranked and hop into a fight against a random opponent immediately. Even better, you can request to add someone you fight to your "rival" list, essentially a second friends list. Unfortunately, online play regularly suffers noticeable freezes. Although they aren't bad enough to curse the whole effort as a waste, they're certainly enough to discard any notion of serious matches being played over the Wi-Fi connection.

Story mode kicks off at the beginning of the Shippuden series, with Naruto returning to the Hidden Leaf Village after several years of training with Jiraiya, the Pervy Sage. From there it follows the Rescue Gaara arc, with its clashes against the Akatsuki and plays for possession of the tailed beasts. While you usually play as Naruto, you also hop into the ninja shoes of everyone from Granny Chiyo and her puppets to Kakashi. Regardless of whether you followed all that or not, don't worry about Story mode. Beyond being a Cliffs Notes version of the storyline that requires a decent understanding of the Naruto mythos to begin with, it's too incomplete to hold the interest of anyone familiar with Naruto and too incongruous to make sense to anyone else. More damningly, Story mode is imbalanced. As you jump from scenario to scenario, you might find yourself and two computer-controlled allies against one enemy, making the fight a cakewalk. You also fight alone against a computer-controlled tag-team pair, which is just as ridiculous as it sounds. As excellently balanced as the combat is, Story mode falls flat on its face.

The selection of extras is nice, with everything from characters and modes to difficulty settings to be unlocked. You earn cash to spend in the extras shop from just about everything you do in-game, so there's little reason to suffer through Story mode for points. And although it's not in the shop, it's a nice little extra that you can use just about any controller setup the Wii accepts. The Classic and WaveBird controllers are your best choices for precision, but the nunchuk and Wii Remote combination affords you the unique ability to enter ninja hand signs: hold down the Z and C buttons, trace either left-down-right or right-down-left with the remote, and you gain an in-match bonus. It's your choice as to which setup is the better fit for your play style.

Naruto Shippuden: Clash of Ninja Revolution 3 sits heads and (nine) tails above most licensed games, and also most fighting games. While Story mode isn't anything to write home about, and the wireless connectivity has some lag issues, Revolution 3 is a good fighter that should please any fan of the titular anime who is in a position to play it with friends without needing to go online. 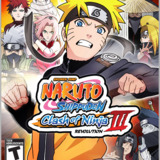