Fans will appreciate the good-looking characters and hard-hitting attacks, but Clash of Ninja is an experience cut short by a pervasive lack of depth.

Shonen Jump's Naruto has found a strong following in both its manga and anime forms, due largely to its winning formula of oversized personalities, impossible powers, and of course, silly ninja antics. Naruto: Clash of Ninja casts the core of heroes and villains into a fighting game that, while lacking in features or depth, sports some good-looking fighters that brandish fun and powerful attacks.

As with any anime worth its salt, Naruto establishes itself with a ridiculously high-concept premise about evil nine-tailed fox demons, magic, and powerful ninjas. It's pretty trippy stuff, but Clash of Ninja makes the smart assumption that its audience is already well-versed in the Naruto lore and just wants to get down to the fighting already. As a fighting game, Clash of Ninja is simple and accessible, obviously designed for a younger audience, or at least a less discerning audience. Almost all attacks are dished out with the A and B buttons, and the nature of the attacks can be changed almost entirely by holding a direction with the analog stick. Combo attacks play a big role here, and though it's not exactly easy to button-mash your way into a killer 10-hit combo, it doesn't really require exacting precision, either. Though the characters can't fly per se, there's plenty of aerial action as many attacks will launch opponents into the air, setting them up for some mean juggles. Also, the classic ninja puff of smoke is of strategic importance here, as it's possible to fight above, below, or behind an opponent with a button press and a flick of the analog stick. The Y button throws opponents, and the X button can unleash a special move once you've filled your character's chakra meter, which will happen naturally over the course of a fight.

It can be an engaging game to watch. The eight different selectable fighters translate nicely from their flat animated origins into three-dimensional, cel-shaded models, which are given a nice, stark look with some potent self-shadowing. Smooth, powerful-looking animations are enhanced by bursts of light and clouds of dust, and the special attacks are pumped up by a cinematic camera angle and some purposeful pauses. Powerful sound effects and a driving soundtrack give additional weight to the action, though the characters' battle cries get repetitive quick.

As good as Clash of Ninja can be to look at, if you've played any kind of fighting game before, you'll master the techniques in Naruto in a matter of minutes, and once you've mastered one character, you've just about mastered them all. The characters simply don't have enough moves, and there's not enough to differentiate the characters. While many of the attacks can vary from character to character, with the special moves being especially unique, the basic combo patterns are too similar. Additional faults come to light quickly, like the slow turnaround time for a fighter that has ended up with their back to their opponent, or the arenas that are simply too small for the action, and usually rather drab looking.

Furthermore, Clash of Ninja has some seriously boring and predictable options for modes of play. What passes for a story mode here consists of a series of seven fights interrupted by some still frames of characters exchanging a few lines of dialog before launching into another fight. The dialog is about as weak and perfunctory as you might anticipate, and the voice acting plays right into some of the worst stereotypes of anime voice acting, with lots of hyperactive preteen shouting and cool, gravely threats from villains. That you can play through the story mode only as Naruto makes it especially useless. Beyond that, there's a one-player game in which you choose your character and play against all of the game's characters, a separate VS CPU mode in which you get to choose your fighter as well as your opponent, a straight two-player mode, and the prerequisite survival, time attack, and training modes. You can unlock some character art and bios by playing through some of the modes, but Clash of Ninja is generally lacking in incentives.

Even as fan service, Naruto: Clash of Ninja feels pretty lacking. After you've played each of the characters a few times, you've basically mastered them, and once you've played through each of the modes, which are few and generally short, there's little reason for you to come back. What Clash of Ninja does have are some slick-looking fighters pulling off some signature moves, and the potential for a much better sequel. That just may be enough for some fans. 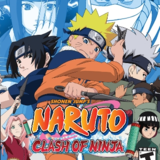