Nanostray 2 is a dyed-in-the-wool shoot-'em-up that offers great action in a shiny, proficient package.

Hundreds of enemies. Thousands of projectiles. Millions of points at stake. Billions of ways to die. Nanostray 2, in classic shoot-'em-up tradition, pits these mind-bending numbers against the power of one in a relentless challenge that demands precision, rewards determination, and castigates error. Yet despite the daunting challenges it poses, Nanostray 2 does not require seasoned twitch reflexes for admission. This accessibility, along with its competent execution and attractive visuals, makes Nanostray 2 a draw for genre veterans and neophytes alike.

The logical starting place in Nanostray 2 is the single-player Adventure mode. In this mode, legions of foes will try to stop you from researching the Nanostray virus, which takes malicious control of modern technology and makes it want to blast you. Each of the eight planets you'll visit features unique backgrounds, enemies, hazards, and bosses, all of which are colorfully and vibrantly rendered. Levels are bisected by a miniboss and culminate with a big boss, with no save points or respite along the way. Levels can last anywhere from five to 45 minutes depending on the player skill and become much more perilous on harder difficulties. The screen will usually scroll vertically or horizontally depending on the level, though the scroll direction does change a fair bit midlevel. This refreshing variation, along with the detailed and appealing graphics, is a nice tonic against the eye strain that shoot-'em-ups inevitably tend to cause.

Nanostray 2 offers two ways to control the movement of your ship, but you really only need one. The D pad is far too sluggish and imprecise to pull off the skin-of-your-teeth maneuvers that the game demands, so go with the touch screen. The action will play out on the touch screen so your ship will go where your stylus goes, and you can map the two attack buttons to either side of the DS depending on your preference. Stylus controls are precise and make finding those tiny pathways through fields of projectiles much easier, which goes a long way toward making the game easier to play for the unseasoned among you. The only drawback is the blind spots that the stylus and your hand will create as you hold them over the touch screen. But this doesn't prevent the controls from feeling sharp and well-implemented. And don't fret, vets, Nanostray 2 still brings the crazy, alone-in-a-sea-of-death challenge on harder difficulty settings.

When it comes to the actual blasting of almost everything you see, your armament is limited but versatile. Your primary gun can continuously shoot straight ahead and can be complemented by two satellite guns that you earn at the beginning of the level when you destroy your first two waves of foes. These satellites can rotate among three set positions around your ship, which you map out at the beginning of each level at the weapons selection screen. Customizing the angles of fire you'll be able to cover is a neat gimmick, and toggling between them proves to be a vital survival skill. You'll also select one of up to six subweapons to load up; whichever you prefer will depend on your play style, your skill level, and the particular level you're on at the time. Some, like the radial attack and the enemy-hopping chain blast, are useful in a variety of situations. Others, however, like the overpowered shot and trigger mine, are more specialized.

The niche weapons seem more at home in the diverting Challenge mode, which sets forth four increasingly difficult sets of eight challenges to conquer. These challenges generally last 15 seconds to a minute, testing your shooting and maneuvering skills in short intense bursts. As such, they serve as an excellent training ground for honing your skills in quick, concentrated sessions, rather than the longer campaign where too many mistakes can undo many levels of progress. Completing each set of challenges will unlock a Simulator, which is essentially a minigame based on a popular casual game archetype. Variations of Brick-Out, Asteroids, and Snake are here, as well as a tunnel flying game that feels a bit like Star Fox (SNES) meets Amplitude (PlayStation 2). None of them are particularly good, but they do serve as adequate diversions from the main gameplay, perhaps best implemented when you're frustrated and need to cleanse your palate before diving back into the breach.

You can play Nanostray 2 with a friend using either single-card or multicard download play. Single-card offers only two competitive modes, each set in a fixed arena. Unfortunately, the player without a card can't use touch-screen controls, and the resulting imbalance really hamstrings the competition. Multicard allows both players to use the touch screen and offers a cooperative Adventure mode, in addition to the Arena mode. The competitive and cooperative modes are interesting play options, but both feel like a pale shade of the single-player experience. Having two ships on the screen following similar paths and often overlapping can get distracting, especially if you're both trying to squeeze through the same lane to safety. The best competitive outlet this game offers is the Arcade mode, which you unlock by beating Adventure mode and allows you to play through any level repeatedly. Being able to compare your high score with your friend or with the world via the Wi-Fi score upload feature feels like the best competitive fit in a game that pits you alone against hordes of opponents.

The multiplayer and Simulator modes leave a bit to be desired, but the Adventure, Arcade, and Challenge modes are quite satisfying. In fact, these modes should offer more than enough to satisfy and challenge both newcomers and pros alike. For classic shoot-'em-up action on the DS, Nanostray 2 is the game to get. 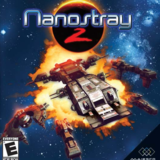