Swedish developer Pocket Panic probably isn't well recognized outside of its immediate Nordic environs, but its relative obscurity doesn't bear upon its ability to dish out a great mobile adventure. Its new platformer, Nano Kid, is reminiscent of such first-generation classics as Fantasy Zone and Alex Kidd, yet the game retains enough of its own quirky style and interesting gameplay angles to provide a fresh, entertaining mobile experience. Nano Kid strikes the perilous balance between homage and over-derivation very well--which is no easy feat on a platform rife with chopped-up retro games and shoddy clones.

Nano Kid may be several billion times smaller than your average video game hero, but his level of courage is on par with any macroscopic muscle head you'd care to name. When the evil Cranky invades Nano Land and kidnaps Nano Kid's equally diminutive friends, he lights off on a rescue mission, vaulting through portals that take him from Nano World to Nano World on his buddies' trail. Your job is to guide Nano Kid through these hazard-filled levels while searching each area for the three magic crystals that will open the door to the next segment.

This crystal collection and rescue business is quite pedestrian, but it's a rare mobile platformer that gives more than a cursory treatment to its background story. Nano Kid's superbly simple hop-and-pop gameplay is the real attraction here, and rightfully so. Operating wisely within the parameters of the mobile platform, Pocket Panic has kept things blessedly easy on the control side. You can move Nano Kid right or left, make him jump, or use one of several items--like hammers, magic wands, diving masks, high-jump shoes, umbrellas, and helicopter hats--to bust through or circumnavigate enemies and obstacles as necessary. The controls are very responsive, allowing you to maneuver Nano Kid adroitly, even in midair. And although the controls, by default configuration, seem to be tailored strangely, they are entirely customizable, which is something of a rarity on mobile.

It's good that Nano Kid is such an agile microbe, because Nano World is filled with enemies and traps galore. The baddies mostly consist of creatures like butterflies, snails, and ghosts, many of which move slowly in side-to-side or up-and-down patterns, making them pretty easy to dispatch with the short-range hammer or the magic wand (a device that emits deadly bolts of energy for combat at a distance). These creatures aren't usually a threat by themselves, since Nano Kid can sustain three hits before losing a life; however, their collective presence complicates the platforming elements of Nano Kid immensely, because these baddies will often be making their rounds right at the tail end of a particularly difficult jump or maneuver. They become a real hindrance when factored into Nano Kid's level design, which has been carefully engineered to increase the game's challenge as you proceed through it. Collecting the three requisite crystals is pretty easy in the early levels, since they mostly serve to introduce you to Nano Kid's various gameplay elements and power-ups.

As the levels progress, however, Pocket Panic continuously adds new hazards to the mix, including spikes, water traps, ice, and bottomless pits. Many of the later levels require some amount of planning to ensure that you collect the power-ups in the correct order so that you'll have enough life left over to snatch the crystals and open the door. For instance, you may need to grab the high-jump boots to access the hammer, which lets you break the barrier to the copter cap. After this you must carefully navigate a spiked tunnel to gain a crystal. Whether you're running, swimming, floating, or flying, Nano Kid always puts enough wrinkles in the way to make things interesting.

Nano Kid has an excellent audiovisual presentation that makes full use of the Sony Ericsson K700's horsepower. The graphics are incandescently bright and endearingly cute, featuring the sort of plushy animation one might associate with early NES and Sega Master System platformers. Nano Kid's background art is far and away its most remarkable feature, and it includes lush colors, parallax scrolling, and even some elementary lens flare. This visual finery looks amazing, but you can choose to turn it off on the options screen to double the speed of gameplay. Incredible environments aside, it would have been nice if the character art had been a little bigger. In fact, Nano Kid could have easily been dubbed Pico Kid, given the small number of pixels devoted to his character. Nano Kid's music is top-notch, featuring catchy title and menu music, as well as a fresh tune every three or four levels. Unfortunately, Nano Kid is devoid of sound effects, which could have helped to punctuate its platforming action.

In all, Nano Kid is a really fun platformer that packs a surprising amount of gameplay variety into a small space. There's only one difficulty level, but Pocket Panic put enough thought into its game's design to make it a fairly enduring play. As a result, it will probably take you several hours of gaming to beat the game, especially considering the limited number of continues the game awards you. Even if you've seen the components of his journey before, Nano Kid is his own kind of hero, and his game is well worth the download. 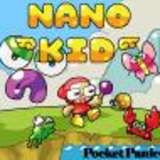 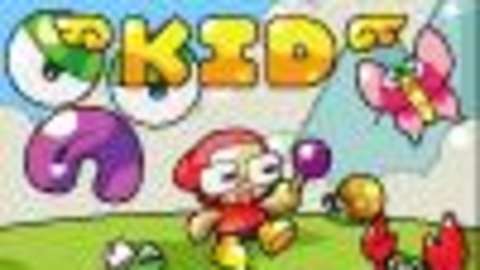