This mindless hack-and-slash action game starts out feeling tired and repetitive and only goes downhill from there.

N3II: Ninety-Nine Nights may be only the second game in this hack-and-slash series, but it's modeled so shamelessly on the Dynasty Warriors franchise that it feels like something we've seen a dozen times before. It also feels carelessly put together, with a lousy story that is marred by technical problems, shallow combat, and frustrating design choices--and there is no attempt to build on the concepts that it apes from the Dynasty Warriors games. All of this makes N3II a tired, derivative, soul-crushingly tedious experience.

The fantasy kingdom of Orphea is in the midst of dark times. The Lord of the Night appeared 92 days ago, and his armies of evil are spreading across the land. Unfortunately, most of Orphea's soldiers are basically useless, so it falls upon five brave heroes to do the bulk of the work, slashing the forces of darkness to bits by the thousands in battles across the land. The story is all typical fantasy stuff, and the characters are as lifeless as the plot is unoriginal. It’s a by-the-numbers tale that’s made worse by the fact that some cutscenes suffer from severe lip-syncing problems.

Initially, the sheer scope of the battles in N3II can be exciting. In the first mission, you face enemy soldiers by the hundreds in the courtyard of a castle while huge flaming stones soar through the sky above. It's a thrilling fantasy scene until you realize that most of those enemy soldiers aren't fighting for their lives in an intense battle but are patiently milling around just waiting to be cleaved in two by a few swings of your blade. They politely gather around you so that the huge sweeping arcs of your attacks can conveniently mow them to bits, and they're usually quickly replaced by many more soldiers. As the warrior Galen, you can string together your attack buttons to perform stylish and spectacular combos, and the sight of Galen twirling gracefully around--his twin blades slicing through enemies effortlessly--is impressive at first. But it quickly becomes clear that this is all just mindless button mashing, and with some levels that can drag on for the better part of an hour, the biggest challenge is to avoid getting lulled into a stupor by the excruciatingly dull action. As you progress, you encounter other characters that then become available until you have five interconnected stories to play through. While these characters feel quite different from one another, the combat is as repetitive and tiresome with one of them as it is with any other, so although the sheer brute strength of the hulking Maggni is a nice change from Galen's more graceful techniques at first, it rapidly becomes every bit as dreary.

The shallowness and tedium of the combat doesn't mean the game is easy, but the difficulty here isn't the sort that spurs you on to offer a sense of triumph when you finally succeed. Rather, the gameplay and difficulty conspire to beat you into submission. You'll face off against enemies in such large numbers that your health will get slowly chipped away, and the game is often diabolically stingy with healing items. Some enemy attacks knock you down instantly, and you might get up only to be instantly knocked down again, which is a cheap and infuriating substitute for actual challenge. There are checkpoints in each level, but they're so spread out that death often means repeating a long stretch of action that wasn't even fun the first time. And you might make it all the way to the end of a level only to find that you need to level up your character before having a fighting chance of defeating the outrageously powerful boss monster. This leaves you with no choice but to quit the level, replay earlier levels for experience, and then fight your way all the way back to the boss again. Oh, and be warned: The Colosseum level that you can access at any time, which seems designed precisely for fighting enemies and leveling up your characters, actually doesn't award you any experience whatsoever. The laughably flimsy game manual doesn't tell you this (or, really, anything else), so you might find out the hard way by spending 20 or 30 minutes hacking away at enemies only to get nothing to show for it.

N3II: Ninety-Nine Nights' visuals are probably its strongest asset, though that's not saying much. Your characters are detailed and their attacks are impressive. The blood of your legions of fallen foes spatters the screen, and the special orb spark techniques you can unleash from time to time are accompanied by some dazzling effects. And there are many flourishes to the environments--the swirling snowstorms surrounding a castle on a mountaintop, for instance--that lend the battles a sense of drama. On the other hand, the fact that the thousands of rank-and-file enemy soldiers you'll chop your way through on each level all look identical saps the sense of awe from these massive conflicts. There's some rousing orchestral music, though it's often drowned out by the din of battle. The clash and clang of metal on metal and the other sounds of conflict all suit the action well.

In addition to the single-player story mode, you can team up with a partner and play through a variety of online scenarios in which you must survive wave after wave of spawning foes, fight your way through a maze, and race to see who can eviscerate the most enemies. But the combat is no more capable of providing an enjoyable multiplayer experience than it is a decent single-player one. The concept of tossing you into massive battles against thousands of enemies is certainly one with the potential to deliver eye-popping spectacle and thrilling action, but N3II fails to make good on this concept. The only epic struggle this game puts you in is the test of just how much boredom you can endure. 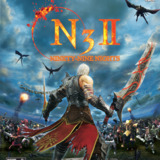