The addictive gameplay and stylish design of N+ make the game as charming as it is challenging.

Not too long ago, an aspiring designer created the ultimate deathtraps for ninjas. These traps were not merely cunning mazes or enemy-filled rooms, but also a free downloadable game for the PC. The game was known as N, a stylishly short abbreviation for (the way of the) Ninja. Slick Entertainment decided to bring the popular PC game to the Xbox 360 in the form of N+.

In the game, you must guide a bell-bottom-clad ninja across chasms and through increasingly challenging mazes to activate a switch--or series of switches--to open an exit. By making use of the full repertoire of moves from just about every platformer known to humankind, you can find the little guy a way out of more than 250 encounters. Available moves include a wall jump, a wall slide, the ability to sprint up and down inclines, and even to bound off of walls and marshmallowy blocks suspended in the air. You don't have a sword or a double-jump ability, but you do have plenty of control over your in-flight movement. This will help you land on narrow ledges, slip through tight passages, and reverse your momentum to avoid any number of diabolical devices. The creator of the various levels cunningly embedded deadly red mines, electrified blue orbs, and stationary units that shoot either homing missiles or lethally accurate projectiles.

As if the enemies and level designs were not challenging enough, you'll also be playing against the clock. At the top of the screen is a gold bar that represents your remaining time to successfully navigate the treacherous levels. You can increase the time by picking up yellow blocks peppered around the playing field. Although these units of golden measure extend your play time, they may also shorten your life because they're available only in hard-to-reach or danger-soaked areas. The time you accumulate carries over from map to map, in five-map sets.

This version updates the graphics to make the imagery cleaner, sharper, and more colorful, and it includes offline and online co-op modes, a trance-style soundtrack, and levels originally created by the N community. The good news is that the level-creation opportunities haven't ended now that the game has made the move to a console. Within the downloaded package is a simple level maker. Aspiring Ninja challengers can craft subtle jumping puzzles, mine-filled mazes, and areas of overt enemy encounters. The only limit to your ability to create vexing arenas is your imagination. The tool is simple enough that even amateur ninja slayers will be able to compose the most demanding gauntlets for other players to download.

Unfortunately, the game suffers from a few drawbacks. Though the online play is enjoyable, the rockets that follow you tend to make an inexplicable jump either to where you are or back to the launcher. You're sometimes blown up or otherwise terminated when you get near (but don't actually touch) electrified mines. Similarly, when you're playing online, the other players' actions frequently seem to trip explosives that they in fact avoided. It's a distraction when you're intently focused on completing your portion of the challenge.

For those of you who are interested, N+ makes great use of the achievements system. Each achievement is sanely connected to your progress through each of the 50 episodes, as well as challenging online races and online survival modes. The one "secret" achievement even provides a satisfyingly amusing payoff once you unlock it, making the road to a full 200 points an enjoyable and challenging ride.

If you haven't already downloaded the free version on the PC, or if you have 800 Microsoft points burning a hole in your console, you owe it to yourself to download this game. Regardless of your jumping skill, platforming history, or dodging prowess, N+ is sure to leave you equally nonplussed and wanting more. 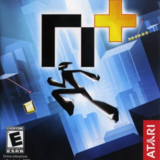