This is last year's unremarkable MySims game with a few changes and a new name.

On the box for MySims Kingdom is a big MySims Kingdom logo, and dashed across the top left corner of that logo is the word "New!", as if to remind you that this is different from that other MySims game on the shelf. Those who pick up the game with that fresh promise in mind will be disappointed. Yes, there are a handful of new minigames and a few small tweaks to last year's formula, but the minimal changes aren't enough to separate this bland simulation game from its predecessor.

Despite the name, the DS version of MySims Kingdom has more in common with the previous DS MySims game than the recently released Wii version. After you return from a trip and settle back into your home, a series of mysterious disappearances happen. With half of the town's buildings and decorations gone, the mayor looks to you to piece things back together. The story is really just an excuse to decorate and play minigames, and it has little to do with the Wii version, though some of the characters from that game do make an appearance and allude to the more enjoyable adventure you'd be having if you were playing that game.

Before you can even think about having fun with MySims Kingdom, you have to jump a few hurdles. Within minutes of starting the game, you'll be introduced to the key characters, given the tools to prosper, and then shoved out the door with little to no direction. You'll wander the town aimlessly for a while trying to figure out what to do. Early progress is further impeded by clumsy and frustrating item collection. To create the items needed by some of the townsfolk, you'll have to collect essences. Using the Extractor, you can suck essences out of most outdoor objects. Once you've gathered enough essences, you can dump them into the Synth-O-Tron and create a random item by scribbling on the touch screen.

Once you get past the rough introduction, the game opens up and throws a plethora of quests and minigames at you. The minigames run the quality gamut. There are fun, exciting games such as vegetable vendor and ski jump; forgettable, mediocre games such as tennis; and screen-destroying wastes, which include kayaking. You aren't forced to play these games often, but considering that they can be a good source of income, you'll at least play the ones you like dozens of times. Aside from minigames, you'll spend much of your time returning the town to the bustling community it once was. The building of your town plays out like a diet SimCity, giving you limited placement options but enough light customization to make it your own.

You can play the game using just the touch screen, or with the D pad and face buttons. Both options work well, and with so many games eschewing classic controls for a touch-screen-only interface, it's nice to have a choice. The minigames will have you tapping, scribbling, and doodling all over the screen, and with the exception of some awkward timing in the tennis game and poor handling in the kayak game, they play fine.

Visually, MySims Kingdom is almost identical to last year's game. The blocky environments and characters are represented with a modest amount of polygons and a vibrant color palette. The sims are an expressive bunch and manage to have a wide range of emotions with only eyes and a mouth. Backgrounds are bright and expansive, offering plenty of room to customize your town to your liking. The graphics are technically proficient, especially in some of the minigames, but they lack the charming artistry of the console version. The music consists of a few upbeat tracks that change depending on the time of day. These tracks get repetitive quickly; after a few in-game days, you'll probably be sliding the volume down.

You can sink about 8 to 10 hours into MySims Kingdom before reaching the conclusion. When you're done, you can continue to decorate and develop the town, or you can link up with a friend to play minigames or swap material designs. There's moderate replay value here, and the accessible core mechanics established in the first game are present in the sequel, but unless you're a diehard fan of the MySims franchise, there's not much reason to play this "new" game. 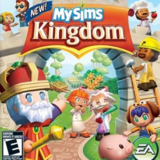 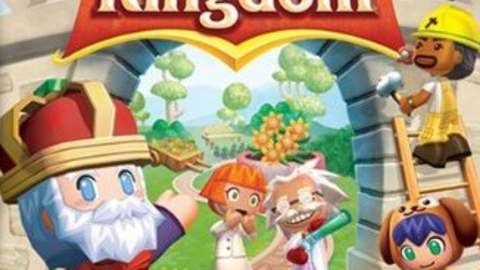 MySims Kingdom is a follow-up to the kid-friendly MySims and is designed specifically for the Wii and DS.