It may look like a little kid's game, but the latest entry in the MySims series is the best to date.

Given the mainstream appeal of both the original Sims franchise and the Wii, something like the MySims series was probably inevitable. Unfortunately, previous attempts at taking the social interactions, decorating skills, and character customization that made the original so compelling and simplifying them for the Wii have met with only middling success. That's what makes MySims Agents such a pleasant surprise. MySims Agents makes significant changes to the series gameplay and attempts to move beyond the shackles of its connection to the original Sims. While the resulting game isn't completely successful at establishing its own identity, MySims Agents offers plenty of family-friendly fun in the tale of a superagent on the rise in the blocky world of The Sims.

The titular agent starts off small in a backwater burg. Without much in the way of villainy to fight, the main character is reduced to being a private detective ferreting out secret admirers and finding lost puppies. When a new supervillain moves to town, sets up shop, and starts digging up the city, though, the Sim Protection Agency is on the job. The agency sets up a new headquarters, deputizes you, and asks you to find out what's going on with this supervillain. This involves a ton of legwork where you run around interviewing witnesses and suspects, track down clues to verify or disprove stories, and get to the bottom of a series of seemingly unrelated cases that end up all being connected.

This departure from the standard MySims gameplay makes for a welcome change. The amount of social interaction with other Sims, which was a big part of previous games, is reduced to merely talking with them about the particulars of a case. You can't make them mad, and in the few instances where there are more verbally aggressive conversational tracks, damage can be quickly corrected by just going through the conversation again. Thus, much of the game involves an adventure game-like search for clues, using a magnifying glass to search for hidden footprints, using a crowbar or a wrench to interact with the environment, or using an ever-increasing arsenal of secret agent gizmos to ferret out the truth. There are some light platforming sequences that won't challenge any but the youngest player and several very enjoyable minigames that must be played when doing such things as analyzing chemicals or fixing a machine.

What makes the game work is that each of the aforementioned elements stands on its own, but they also build on each other to create a more complex and enjoyable experience. After the first few cases, you'll get your own spy headquarters with five floors that can be painted and customized with discoverable furniture. Solving cases also nets junior agents who can be sent out on lesser cases. During those missions, they'll frequently (sometimes too frequently) text message you, describe their situation, and ask for advice on how to handle it. This adds an interesting strategic element to the game because junior agents have their own abilities and are paired up into teams of three for missions. Their skill sets will combine together to make them more or less effective at their jobs, which leads to some interesting decisions on how best to put teams together for particular assignments. Their abilities are also impacted by the furniture that you'll place on whichever floor they're assigned to, which makes exploring the niches of the gameworld for hidden furniture and special pieces of clothing not only fun but also a key element of playing the game.

Unfortunately, MySims Agent lacks the courage of its convictions. As a simplified adventure game, you wouldn't expect really nasty brain-busting puzzles, but MySims Agents goes a little too far with the hand-holding. The game's investigative journal offers "clues" that sometimes run just short of being an in-game walk-through. Because the game has reduced the social-interaction gameplay in favor of a more linear narrative, it'd also be nice if the writing was a bit punchier. There are certainly great moments of humor. Your sidekick Buddy, for example, provides most of the laugh-out loud humor through his wonderfully expressive body language. Much of the dialogue just falls flat, though, and many of the Sims you'll interact with come off as boring.

Even with its flaws, MySims Agents stands out as the best entry in the MySims series. Moving away from the free-form gameplay style in favor of a more linear adventure game experience really works. The cute blocky graphic style and attractive art design make exploration of some of the weirder sections of the Sims world a genuine pleasure. Thus, on the whole, the game is highly accessible and provides a lot of family-friendly fun. If it no longer fits in with its parent franchise's gameplay style, that's to its credit, and if it hasn't quite developed its own identity as a series, MySims Agents is a solid step in the right direction. 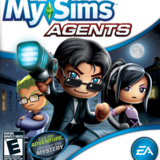 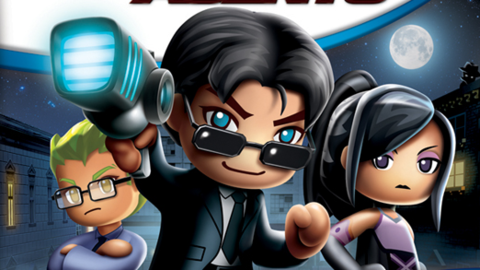 Search for clues, solve puzzles and match wits with the mysterious thief in MySims Agents.