This 2D hack-and-slash adventure lacks depth, but the striking backgrounds make it easy to get sucked into its world.

Every so often, a game comes out that looks so incredible, it's easy to look past the small problems bubbling just beneath the surface in order to enjoy its brilliant artistic design. Muramasa: The Demon Blade offers so much more than its pedestrian combat and meandering story promise. It's a visual feast that pulls you to each new area to marvel at the swaying wheat blowing gently in the breeze, the subtle illumination of the enchanted caves, or the majestic waterfall cascading behind you. The numerous bosses receive the same level of attention, both in their fantastic visual style and their unpredictable attack patterns. But the standard action, which is too simple and repetitive to be a draw in its own right, never quite matches the inspired artistic beauty. Though the combat may be merely ordinary, the gorgeous visuals are enough to make Muramasa a memorable experience.

The story in Muramasa is split between two characters, though the tale is often difficult to follow and the protagonists are far from endearing. At the title screen, you choose to play as either Momohime, a girl who has her body possessed by a powerful swordsman, or Kisuke, a boy who just can't seem to remember who he is. You roam the lands in search of the truth, slaying demons, gods, and anything else that stands in your way. Despite the often cryptic storytelling, there are a few elements that make this dual-hero setup interesting. Although both characters travel across the same world and fight many of the same enemies, they collect different swords during their quests and square off against different bosses as well. Furthermore, the two stories spill into each other at times. Playing through a second time, with the other character, reveals more about the world and gives some meaning to all the unexplained madness.

The combat is certainly a better draw than the perfunctory story, although it delivers a skewed balance between style and substance. You can choose to play with a GameCube or Classic Controller or a Wii Remote and Nunchuk, and there is no difference between the control schemes. The majority of your offensive and defensive maneuvers are handled with just one button. Though this limits the amount of moves at your disposal, it makes for smooth and fun combat. If you tap the button, you swing your sword once, and if you tap it multiple times, it results in a brief combo. Holding this button down and moving the D pad lets you swoop across the screen, either in a side-to-side dash, rising uppercut, or speedy downward strike. This button also controls your defensive maneuvers. Holding it down causes your character to block and, if you time this tap perfectly, repel your enemies' thrown attacks back at them. Zipping across the screen, striking down enemies with impunity, and making your combo score soar is certainly fun, but it lacks depth. The majority of your battles are over in less than 30 seconds, and you won't have to change your attack strategy very often.

Every time you block an attack, your sword gets slightly weakened, and if the fight drags on long enough, it will shatter. Because your weapons are so brittle, you bring three different swords with you in battle. When you sheath a busted blade, it will slowly regenerate while you slice and dice with a fresh one. The different swords add a tiny bit of strategy to the usually mindless fights because each of the more than 100 different blades has a unique special attack. These moves are not explained beforehand, so you must try them all out in battle to see what these new powers bring. Sometimes, they let you perform a new attack, such as a spinning strike, and at other times, they imbue your character with new abilities, such as a brief immunity to fire. Swords are earned every time you destroy a boss, but they can also be forged outside of battle. The experience points you earn by defeating enemies can be used to create more powerful swords, and it's fun unlocking every sword to experiment with their special attacks.

Normal enemies can be disposed of with a few quick strikes, but boss encounters are much more thoughtful and, therefore, more rewarding. These imposing foes take very different forms, from a group of centipedes that rarely attack but have an awful lot of health, to a towering god that has a couple of flying protectors hounding your every step. Figuring out the patterns is a fun game of trial and error, forcing you to cleverly dodge their attacks until they open themselves up for a retaliatory blow. As the game progresses, the bosses become exceedingly challenging, though you can switch between the two difficulty settings at any time if you find your path frustratingly halted. Because you can level up your character and unlock new weapons, it can be fun to grind against normal enemies for a little while and then strike back at the boss that tormented you so with even more power at your fingertips.

There isn't much to do in Muramasa outside of battle. You can explore the beautifully crafted 2D world looking for hidden treasures, but the reward is hardly worth the effort. It's so easy to find these scattered objects, which are designated on your map, that they may as well not be hidden at all. The most interesting aspect of the noncombat gameplay is having another chance to admire this beautiful world without enemies chasing you or a pointless story obscuring your view. The backdrops do repeat, but they are so beautiful to look at, you'll hardly care when you come across a snowy mountain or bustling village one more time. Despite the impressive sights, it would have been nice to partake in more interesting duties when you aren't cutting down foes with a sword.

It's a shame the other elements of Muramasa do not reach the level of its amazing art, but the breathtaking visuals are reason enough to play through this adventure. The stylish combat lacks depth, which makes repetition sink in after just a few hours, but it is still fun to fly across the screen to strike down enemies with flair and test your new blades on your weary foes. And even though the normal battles lack diversity, the boss encounters are unique and memorable, pushing players to learn intricate patterns while honing their skills. Muramasa has its share of problems, but the meticulously crafted 2D art makes it possible to overlook them for long enough to enjoy this engaging experience. 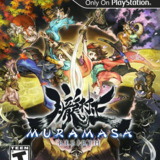