Mundaun Review: Dark Secrets And The People Who Find Them

Mundaun is a great horror adventure game in a gorgeous hand-drawn world.

The journey, rather than the destination, is the focus of Mundaun--the reasons you take it and the travel required to reach its conclusion. In this way, it feels like a spiritual successor to Half-Life 2's Highway 17, a mid-game chapter that finds crowbar-toting protagonist Gordon Freeman traveling by buggy along the lonely coast. It's a lengthy, melancholy section of the 2004 shooter where the driving is occasionally interrupted by combat, puzzles, and on-foot exploration. Mundaun is like Highway 17 expanded to a full 10-hour experience. In your journey to the mountaintop, you sit passively in a bus, drive a hay-baling truck along bumpy terrain, and ride a sled across quiet alpine slopes. You're guided through a series of dark, labyrinthine tunnels by a trolley car the size of a toaster. You ride a chair lift. The inclusion of vehicles might not sound noteworthy on its own, but traversing the mountain in all these different ways--on foot, by sled, by truck--has the effect of making the mountain feel like a real place; a peak that must be considered to be conquered. You don't cover dozens of virtual miles in your quest, but Mundaun feels like a journey nonetheless--personal and physical--as a result of this fixation on the vehicles we use to make our pilgrimages.

This horror adventure game's distinct point of view is obvious the moment you see it in action. Each first-person frame looks like hand-drawn pencil art, and the entire game is presented in black and white. Developer Hidden Fields uses this to terrific, eerie effect. The mountain lake where those beekeepers are doing their work is beautifully alien, a rocky landscape that's empty except for these strange beings in their protective suits accompanied by an unnerving buzzing. Night on the mountain's snowy slopes feels eerie in a different way--dark, save for the light of the moon, and quiet, save for the sound of your snowshoes or sled on the powder. With winning art and sound design, Hidden Fields brilliantly brings home the feeling that you are alone, and that this lonely journey is one you must take on your own.

As that journey begins, protagonist Curdin sits on a bus winding its way up narrow mountain roads to the sleepy alpine town where he often visited his grandfather growing up. The young man is returning to the village to attend his grandfather's funeral after receiving news that the old man died when his barn caught fire. But something's wrong. Despite the village priest's claims that his grandfather was already buried, Curdin finds a charred corpse in the barn. When he goes to see the priest, the chapel is locked. He goes to the graveyard--grandfather's grave is empty. As Curdin attempts to get to the bottom of these mysterious events, he begins a trek to the top of the mountain, whose towering pincer-like twin peaks can be seen from almost anywhere in the game.

This overarching mystery--what happened to grandfather?--is interspersed with smaller questions presented by the game's strange iconography. You go to sleep with a spiked paddle balanced on your chest to ward off evil spirits. You defend yourself against malevolent beekeepers with puffs of pipe smoke. You engage in meaningful conversations with the disembodied head of a goat. It may sound like weirdness for weirdness' sake, but Mundaun's refreshingly eccentric perspective has the effect of giving you itches that you can only scratch by continuing to play.

It takes some time for the game to fully come into its own, though. When you first arrive on the mountain, the church is locked, the graveyard is locked, and multiple rooms in grandfather's house are locked. The solution to enter the graveyard involves hearing a girl's singing and a goat's bleating--which initially seem like they might just be background noise--looking up on top of a cliff where the goat and girl are standing, and talking to the girl, who will then throw a paper airplane that loops around the steeple, causing the sun to move. This casts a ray of light to a tree near the graveyard, where you can now find the key. I'm spoiling this puzzle because it's the only bad one in the game. The dream logic required to progress here is an annoying early roadblock in a game that otherwise relies on concrete solutions to concrete problems. I was compelled by the mysteries and by the promise of the locked doors, but frustrated that all my early efforts were funneled to this unintuitive skill check.

Once you progress past this obstacle, though, Mundaun has terrific pacing as you progress up the mountain--a varied loop that cycles effortlessly from on-foot exploration to puzzle-solving to vehicle-based traversal to combat to playable flashbacks that reveal your grandfather's past. I always had something to do and somewhere to go, and each new location cried out for exploration. This is driven by the main plot, to be sure. But it's also driven by smaller tasks along the way. For example, making coffee is an optional task that's introduced early in the game. If you find all the components--a cup, coffee grounds, a pot, a pump to fill that pot with water, a stove and a piece of wood and matches to light a fire--you can brew and drink a cup of coffee, which permanently raises your health. This optional quest was a welcome break if I ever felt stumped on where to go next.

In the early game, the only weapons you have access to are breakable pitchforks, which you may or may not be able to reach when an enemy appears. As you attempt to escape your pursuers, an extra bit of health may be the difference between success and death. So, in addition to desiring to explore because the game's locations are beautiful and varied, I wanted to explore to find coffee grounds. In the process, I often found something unsettling, helpful, or both. A monstrous biped made of haunted hay. A hut filled with hanging carcasses that make music when you touch them. A paper boat serenely floating on a lake's surface inked up with clues from some unseen benefactor on how to defend yourself against an enemy. Mundaun's hills are alive with intrinsic and extrinsic rewards.

The initial segment in the village concludes with Curdin gaining access to his grandfather's hay truck, which you can use to travel more quickly up the roads. And, as you travel ever upward, the personal component of your trek is slowly revealed through playable flashbacks. Through these eerie scenes, you get glimpses of Curdin's grandfather's involvement in a war decades before and a deal with a mysterious, malevolent figure who spared the lives of him and the men in his regiment. These story threads are introduced early on when you meet that dark figure near the wreckage of your grandfather's barn. He clutches your wrist, leaving you marked with a charcoal black hand. As you continue, these threads serve as connective tissue between your current journey and your grandfather's past, woven through each leg of the journey. You meet a character who knew your grandfather; another character descended from one of your grandfather's contemporaries. Each has ties to events we have seen unfold in the past. These links communicate that our journey is connected to the broader history of the mountain and that, as we uncover the mystery of what happened to grandfather, we are also unearthing the community's dark secrets.

The environment, and the secrets it hides, is as interesting as any personal revelation. When you reach your grandfather's house, you are immediately confronted with multiple locked doors, and the process of discovering how to unlock them is slow but rewarding. In its mechanics as in its storytelling, Mundaun effectively mixes long-term question marks (Where will I find the key to unlock grandfather's study?) with concrete short-term goals (I need to enter the chapel to progress the story). Some puzzles on the route to solving these problems are a little obtuse, but most are satisfying to solve. I especially enjoyed one that required that I find the right spot to stop a model truck on its tracks to open a hidden drawer. Additionally, the presence of locked supply rooms that you can use any of a number of disposable keys to open and stoves where you can prepare coffee to increase your health kept me interested in exploration, even when I wasn't sure what to do to advance the critical path. All of these tasks have a central aim: progressing further up the mountain or preparing yourself for what you will face as you progress up the mountain. As a result, even momentary diversions have an enjoyable utility. None of this feels like a waste of time. How could it? Is it a waste of time to pack your bag before a flight?

Unfortunately, in its prerelease state, Mundaun is beset by bugs as disruptive as a flat tire. For example, at one point, while riding on a ski lift, the lift stopped. My mouse look was suddenly, inexplicably limited to the vertical axis. I couldn't tell if this was intentional or a bug. After a while, I restarted the game and played through this same section again. Again, my movement was limited to looking up and down. I tried every item in my inventory, hit every button; nothing worked. Eventually, out of desperation, I restarted the game a second time. When I reached the same section on this try, my vision was unhindered and I easily figured out how to progress. I encountered similar problems at multiple junctures, and this kind of bugginess sows doubt about whether you're actually stumped by a puzzle or hobbled by jank.

Mundaun is an adventure game first and foremost, but it does include combat. The weapons at your disposal are limited to breakable pitchforks and an heirloom rifle. Combat isn't particularly involved, but the presence of enemies helps to differentiate the free and easy exploration of the day from the anxiety-inducing sprints of the eerie night. Using the rifle never feels twitchy; you slowly line up shots, and the gun moves back and forth with your breath. Much of the game passes before you acquire this weapon, but, even once you get it, Mundaun remains a horror adventure game, first and foremost. The shots that you must fire are rare and the rifle's report is a loud, echoing crack. It feels like you are breaking the mountain's quiet peace, disrupting the inherent solitude of the place, each time you fire off a round.

Thankfully, your time on the mountain runs low on ammunition and high on strange, wonderful mystery. Mundaun is a darkly original work. This is an impeccably paced game with satisfying gameplay that fits hand-in-glove with its narrative focus on the process of taking a journey. That journey is rich in atmosphere and imagery, sustained by questions until it is satisfied with clever answers. My trek was well worth the effort for the view from the peak. 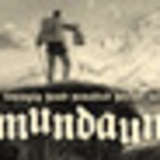 Andrew played 10 hours of Mundaun for this review. His new vehicle of choice is a wooden sled guided by a dead goat's magic bell. Code was provided by the publisher.