You'll realize right away that the ideal setting for intense music creation is not the 2MB RAM PlayStation.

MTV: Music Generator isn't a game but rather a PlayStation program, of sorts, and the type of product we don't see too often. But it can be considered by the same criteria we judge games by: graphics, sound, value, and so forth. Unlike many of the music games that have shown up throughout the last year or so - Parappa, Um Jammer Lammy, and Konami's Bemani series, to name a few - MTV: MG is a music-making tool that attempts to take what PC music-editing and music-creating programs let you do full scale and brings the experience to the novice consumer who happens to own a PlayStation.

It works like this: You pop in the Music Generator disc and choose to create a song. By hitting the circle button on your control pad, you can select from a list of menu items, including what you need to get started: the riff library, which includes about 4,500 samples. In this section, you choose from beats, drums, vocal samples, melodies, bass lines, and so forth, and you place the riffs on the blank score. You then build your song (which we can't tell you how to do here - just be creative), checking and editing it as you go, then saving it when you're finished.

This mode is intuitive and simple, and if you bear in mind your limited memory capacity before you get too far into your song, you will be pleased with what you are able to create so quickly and effortlessly. But the real fun and, likewise, the real downfall of the program appears when you try the more advanced maneuvers. For example, you can record samples from audio CDs by swapping out the disc with the CD of your choice and then following simple commands that pop up on your screen. Once you record the audio you want, it's immediately stored in the sampled riff palette until you move it, save it, and access it later. While this sounds like a great idea and certainly rounds out the program, it's extremely limited. Likewise, the intuitive interface takes a plunge once you start looking around for your newly sampled riff. But the true disappointment, which should come as no surprise, is that you can only save seconds of audio before you run out of memory entirely. And the more self-sampled audio you use, the fewer library riffs you can slip in.You'll realize right away that the ideal setting for intense music creation is not the 2MB RAM PlayStation. In addition, the program, albeit intuitive, is not too attractive. Graphically, it's dull, even if it works. There's a video-editing option as well, wherein you synch up basic moving images and patterns to the song you created. You can also set the program to automate these videos. The problem is, once again, memory space. You're very limited by what you can do, and in the end, these video clips end up looking like low-budget college-computer-lab projects... at best.

On the positive side, the game doesn't pretend to woo sound-savvy music editors or individuals with tons of mixing experience. Likewise, it doesn't tell you to ditch the PC editors and use this instead. MTV: Music Generator simply provides the experience of mixing for those who likely won't invest a couple hundred dollars in the very affordable and just as intuitive PC music editor Sonic Foundry Acid or any others, for that matter. And what it promises to do, it does it well. The basic functions are simple enough so that even someone with no music-making experience can get the hang of making a moderately complex song. And if you want to stretch the basics, you can. You can edit riffs, split riffs, as well as play around with keys, tone bending, envelopes, fades, and you name it - memory permitting.

There's a multiplayer jam mode, too. This option lets you play turn-based one-to-four-player sessions that has each of you managing certain beats, rhythms, or melodies to form one complete song. Half the fun is figuring it out, but it's not the kind of game or experience you'll likely go back to often. But it was surprising to see a program like this include a shared experience, so there's value in the inventiveness, if not in the actually gameplay.

For its price, MTV: Music Generator is worth it. It's sort of like the run on Casio keyboards in the early '80s - every house seemed to have one, and most owners didn't have a clue what to do with them. You pounded out basic songs and threw in some drumbeats. This program is more advanced than that and quite a bit more fun. If you're a serious musician and tool around on your PC, you're probably going to be frustrated or bored, as the RAM is obviously limited and the library is nothing you haven't seen or used before. And frankly, there are better libraries elsewhere. But for PlayStation owners who just want a fun, addictive music-making tool, you'll likely be pretty amused, if not downright mesmerized. At least long enough to justify the cost. 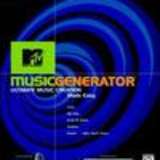 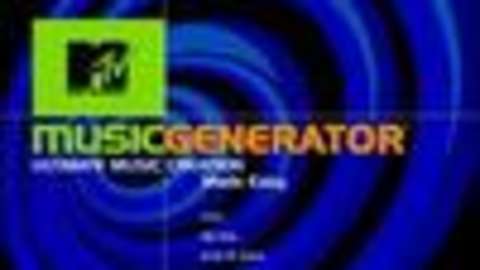 MTV Music Generator is a music program that will let users create their own music and 3D-accelerated music videos using a vast library of prepackaged music, beats, audio effects, and graphics.