Shifting up a gear.

Mr. Shifty's influences are easy to identify. In one sentence, it's "Hotline Miami meets that opening Nightcrawler sequence in X-Men sequel film X2." It's high-concept, but Mr. Shifty lives up to the expectations that description might instill.

You play as the eponymous Mr. Shifty, a gun-averse thief with the power of teleportation who spends the entire game storming a tower in the style of movies like The Raid or Dredd. There's a plot, but the script all but acknowledges that it doesn't matter--you're here to teleport a lot and beat up hundreds of bad guys. Mr. Shifty only has three abilities: He can teleport a short distance, he can punch hard, and he can pick up melee weapons which can then be used to strike an enemy directly or thrown from afar.

In a typical encounter, you might aggressively warp into a room, punch an enemy twice, and then immediately jump out. The foes in the room will give chase, and you'll stand by the doorway and take out another one by slamming them into the door as they exit, then warp to safety. From there, you can warp back into the room they just left and take out the last to leave, then run outside and warp between the stragglers, taking them down as fast as possible.

This is one of the game's simpler scenarios--at any given point, there's a chance you also need to deal with proximity mines, rocket-launching enemies, turrets, moving laser grids, and zones that hinder shifting. The true beauty of Mr. Shifty is that you can only plan so far ahead, especially in later levels. You can have a perfect plan for how to deal with the first 10 foes in an area, but one of them might use a surprising new tactic or more enemies might flood in, and you suddenly need to adjust your strategy. As you warp around--being careful not to use five warps in quick succession and deplete your shift meter--carnage is likely to unfurl around you, and it's up to you to corral your enemies while also being aware of any nearby hazards. Mr. Shifty feels varied, even as you're performing the same actions repeatedly.

It's like a shot of adrenalin, offering an exciting, intense experience, and it's easy to forgive the game's performance flaws when it so consistently makes you feel like a badass.

Enemies are dumb enough to kill their fellow soldiers if they think they have a shot at you, a fact that becomes near-vital once they begin carrying rocket launchers. You can pick up grenades or timed mines, teleport into a room, drop one, and teleport back out. Tricking an enemy into taking out their support or provoking a group of foes before blowing them up with a well-placed mine feels fantastic, and surveying the ensuing carnage makes you feel amazing for having survived it. The key is confidence and fast action, and when you're taking out 20-plus bad guys in quick succession, it's easy to walk away feeling smug.

Mr. Shifty is a hectic, challenging game, but it's rarely frustrating or unfair--the checkpointing is generous, meaning you rarely lose more than a minute of progress at a time. However, a few puzzles and scenarios don't align with game's typical scenarios: a small handful of rooms across Mr. Shifty's 18 levels offer up light puzzles, and in a few instances, the solution requires prompting the somewhat flighty AI into performing very specific actions. These sequences are brief and too uncommon to become a huge issue, though. Realistically, all this means is that the game may hold you up for a few minutes until you figure out a solution.

What's more likely to turn players away from Mr. Shifty is its presentation--to be blunt, this is not a great-looking game. The developers have opted for a cel-shaded look, but everything is rendered very simplistically. The game also suffers from performance issues whenever the screen is full of enemies and effects, which happens a lot toward the end. Mr. Shifty can stutter heavily on both Switch and PC, visibly struggling to handle all the moving parts. However, this isn't a deal breaker, and one of these brief stutters can actually grant you an extra half second to plot your way out of a sticky situation.

Mr. Shifty isn't a huge game in terms of length, but the three- to four-hour campaign is ample. It's like a shot of adrenalin, offering an exciting, intense experience, and it's easy to forgive the game's performance flaws when it so consistently makes you feel like a badass.

View Comments (46)
Back To Top
8
Great
About GameSpot Reviews 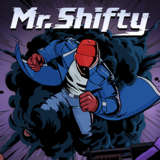 James finished Mr. Shifty on Switch in about 4 hours (needing to stop for breaks--because, wow, is this game intense) and tested out the first three levels of the PC version. He now longs for Switch ports of Hotline Miami 1 and 2. GameSpot was provided with complimentary download codes for the purposes of this review. 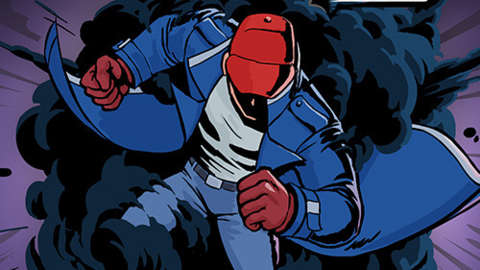 Do you like non-stop action? People have called Mr. Shifty "Hotline Miami meets X-Men". You play as Mr. Shifty, a thief with the ability to shift around like Nightcrawler. One bullet kills you as you're put against overwhelming odd